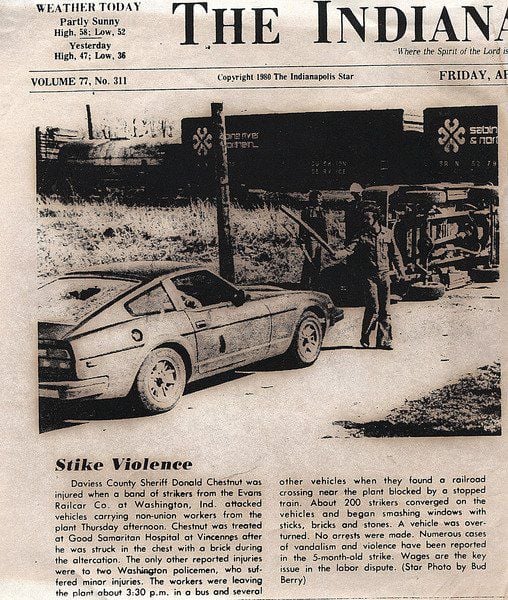 Times Herald fileNews of the violence-packed strike in 1980 made state and national news. Here is a front page clipping from the Indianapolis Star in April 1980. 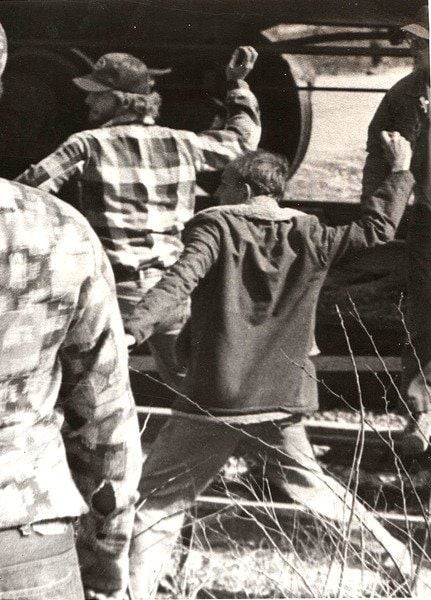 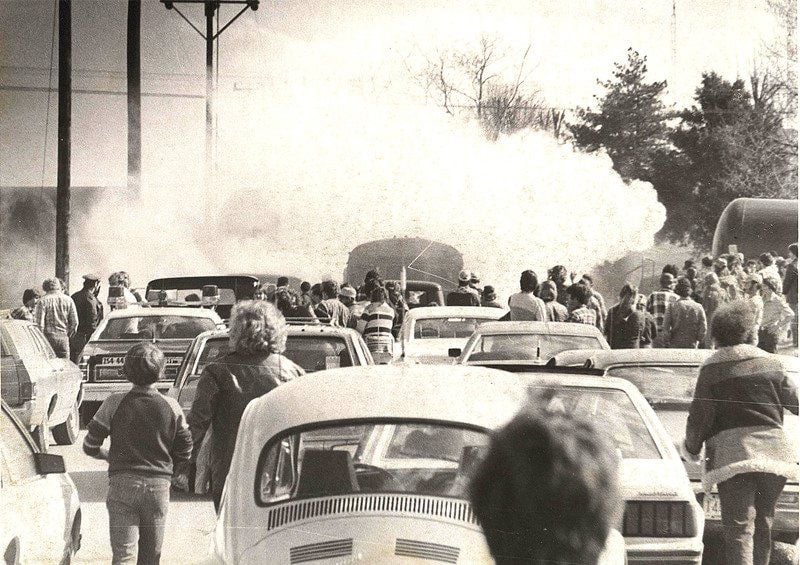 Times Herald file photoWhen replacement workers were brought into to the Evans Railcar Division to fill in for striking workers violence broke out in the city, including firebombings of cars.

Times Herald fileNews of the violence-packed strike in 1980 made state and national news. Here is a front page clipping from the Indianapolis Star in April 1980.

Times Herald file photoWhen replacement workers were brought into to the Evans Railcar Division to fill in for striking workers violence broke out in the city, including firebombings of cars.

A violence-packed, long strike at the Evans Railcar Division divided the City of Washington in 1980, when the Local 39, of the Brotherhood of Railway Carmen and company management couldn’t come to an agreement with the freight car manufacturer. Eventually the strike was settled on a 137-104 vote to return to work, but the losses were great – job losses at the local plant and unity in the community.

Families were divided, and the city’s residents lived through bombings, shotgun blasts, bricks being thrown, telephone threats and intimidation during a seven-month bitter labor strike.

The plant had announced its departure from Washington, and had started dismantling equipment, before an agreement was finally reached, following the resignation of the Local 39 president and its chief negotiator.

The strike had begun on Nov. 8, 1979, over wages, but ended on June 6, 1980, when workers accepted management’s offer of a 31 percent pay increase. Replacement workers who had been bussed in had agreed to accept layoffs, but the economic impact of the bitter dispute would take years to recover.

A national economic turndown didn’t help the local economic situation at the time.

David Cox, who was executive director of the Daviess County Chamber at the time, said no businesses had closed in the previous months due to lost sales due to the strikers’ loss of income, but some marginal companies did struggle, and new prospects.

The railcar strike couldn’t have come at a worse time for the community, when two other plants had just closed their doors in the past few years before, Uniroyal and McCord’s, totaling about 1,000 jobs.

Bruce A. Smith, a local Washington attorney who was president of the Chamber of Commerce at the time, was quoted by the Indianapolis Star on June 8, 1980, to say, “This violence is so far from what Washington is really like….we got a big-city reputation for violence and the small-town problems of two or three good restaurants and one movie theater.”

Smith went on in the article to call for the community in the coming months and years to “demonstrate the basic decency of our people, the basic desire and willingness to do a good day’s work.”

Evans President Manford Orloff said at the time that he felt closing the 12-year-old plant, which was the city’s second largest employer, was the only way to end the violence surrounding a wage dispute. Workers in the city’s railcar rehab shop, some who eventually went on to sign up for unemployment and some who found other jobs, had been holding out “to get parity” with a similar shop owned by Evans in Blue Island, Ill., where workers made $10 an hour. In Washington, according to newspaper reporters, Local 39 President David McBeth said workers made about $4.95.

In one United Press International report, Washington Mayor Leo J. Sullivan said, “I just hate to see the city lose that many jobs….We really can’t afford it – we already have a 15 percent unemployment rate. It just really is too bad.”

Greg Litherland was a young reporter who just started working at the Times Herald in May 1980, and he remembers the strike well. “Covering the strike and related events was troubling to me because I felt Washington was losing a bit of its soul each day. I don’t think there ever has been a more divisive time in Washington’s history,” Litherland said.

At one point during the strike the U.S. District Court for the Southern District of Indiana, Evansville Division, became involved when the National Labor Relations Board filed a civil suit against Local 39, ordering the union workers to restrain from specific violence. The NLRB hearing in Evansville covered a list of 25 specific complaints filed by the company against the union in its strike activities.

Violence had included three plant private security guards being injured and a fire bomb thrown through the bedroom window of Mayor Sullivan. Following the firebombing attempt at his home, which caused minor damaged when it was quickly doused, Sullivan went on to impose an 11 p.m. to 5 am. curfew for the city.

Sullivan said in a UPI account that he and his wife, Mary Ellen, may have been singled out because he refused to take sides in the strike.

At one point, an anonymous letter was found slipped under the door of the mayor’s office which said the mayor’s office and the Evans plant would be “blown up and destroyed,” unless further testimony was stopped at a National Labor Relations Board hearing.

But the City Council, at the time, did take sides. In late April 1980, the council threatened the Evans Railcar Co. with criminal action if it continued hiring non-union workers (one council member refused to sign and the letter was toned down to say the strike should be “settled and settled now on reasonable terms on which both parties can live.”)

The city council also went on to lift curfew put in place by Sullivan. Council members had been presented with a petition signed by 1,240 asking for the curfew to be lifted. Some businessmen, specifically tavern owners, said the curfew had hurt their businesses.

In April 1980, then Washington Police Chief Tom Baumert asked Indiana Gov. Otis Bowen to send state police officers to the city to help keep peace in the then city with a population of 18,000. Chief Baumert told the Indianapolis Star on April 10, 1980, that his 13-member force had worked countless overtime hours due to the “stress,” of the labor dispute.

In a full-page advertisement in the Times-Herald on Feb. 22, 1980, the Union said “there are many other workers of the Washington Community (such as the Crane Depot workers, U.S. Postal workers, the coal miners, carpenters, Chessie (B&O) railroad workers, construction workers, etc.) who enjoy the competitive wage scales within their crafts. Their employers didn’t cut their pay because “they preferred the Southern Indiana way of life.”

By the end of the strike less than one-half of Evans’ workers remained, as work had already been diverted to others Evans plants. When work resumed, the new contract called for welders to make $5.80 an hour, plus 20 percent incentive and potential for 10 cents an hour cost of living. Workers faced with criminal charged had to serve their judicial sentence, but their slots at work were kept open for them. All 40 replacement workers had agreed to be laid off.

But the company eventually did close its doors in Washington, after most of the equipment was loaded on semis and trucked to Kansas and Illinois.

A parade was held downtown in Washington when the strike was finally over, and Police Chief Baumert remembers yellow t-shirts that read: “We love Washington!”

But Baumert, who went on to become mayor of Washington in 1988, said the strike “wasn’t a very pleasant time.”

“It wasn’t the easiest time as police chief. The union sold everybody a bill of goods,” Baumert said. “It got a lot more violent than I cared for. We couldn’t even answer all the calls (to the police) at the time.”

“For awhile we had a terrible reputation as a strike city, and we had to outgrown that and somehow we did,” he said. As mayor he said he told prospective investors that “we’re really not like what we used to be. We went onto to welcome others and then we turned it out pretty good again.”

He said he was surprised years later when a company out of Chicago again showed interest in the facility. Rescar opened some time after Evans left, and then the facility was closed again for a short time before BW Services began operations at the same location in 2007.

Rescar was company at the site after Evans, but Rescar had been downsizing when it pulled out completely in 2004, leaving just one employee. The buildings had been hit by fire, storm damage and vandalism between 2004 and 2006, with B-W Services announced that it was coming to Washington.

B-W Services is still in the recertification and repair business of railroad cars at the grounds on West Walnut Street on the city’s far west side, where 20 people are currently employed.

The old rail yard has built and repaired rail cars since 1885.

See related Guest Column by Greg Litherland on Page A4.

James M. "Chade" Osborne, 57, of Loogootee, passed away Sunday, Aug. 9, 2020, at his home. He was born July 11, 1963, in Jasper, Indiana, to the late James M. Sr. and Elloise (Roberts) Osborne. Chade enjoyed fishing and being outdoors. He is preceded in death by his parents; brother James Ed…