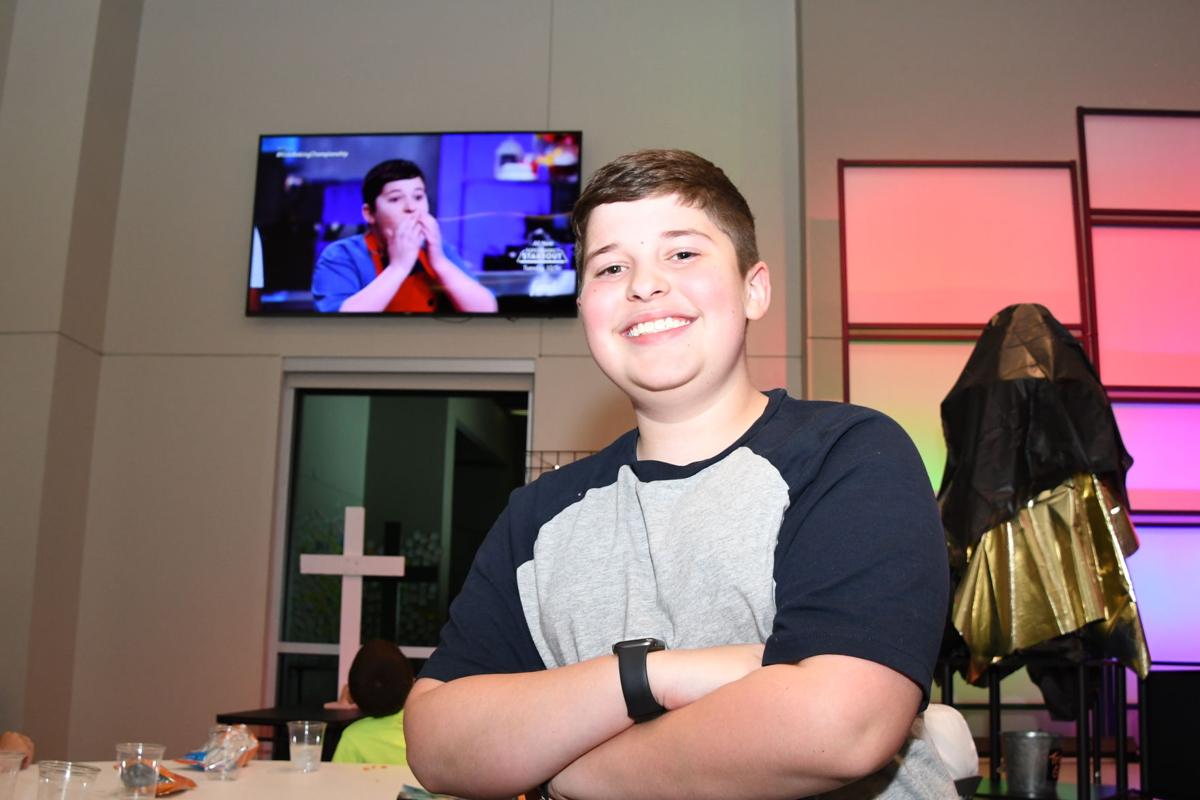 Trevin Alford poses for a photo in front of the one of the large TV’s at Bethany Church during a segment of the Kid’s Baking Championship featuring himself. 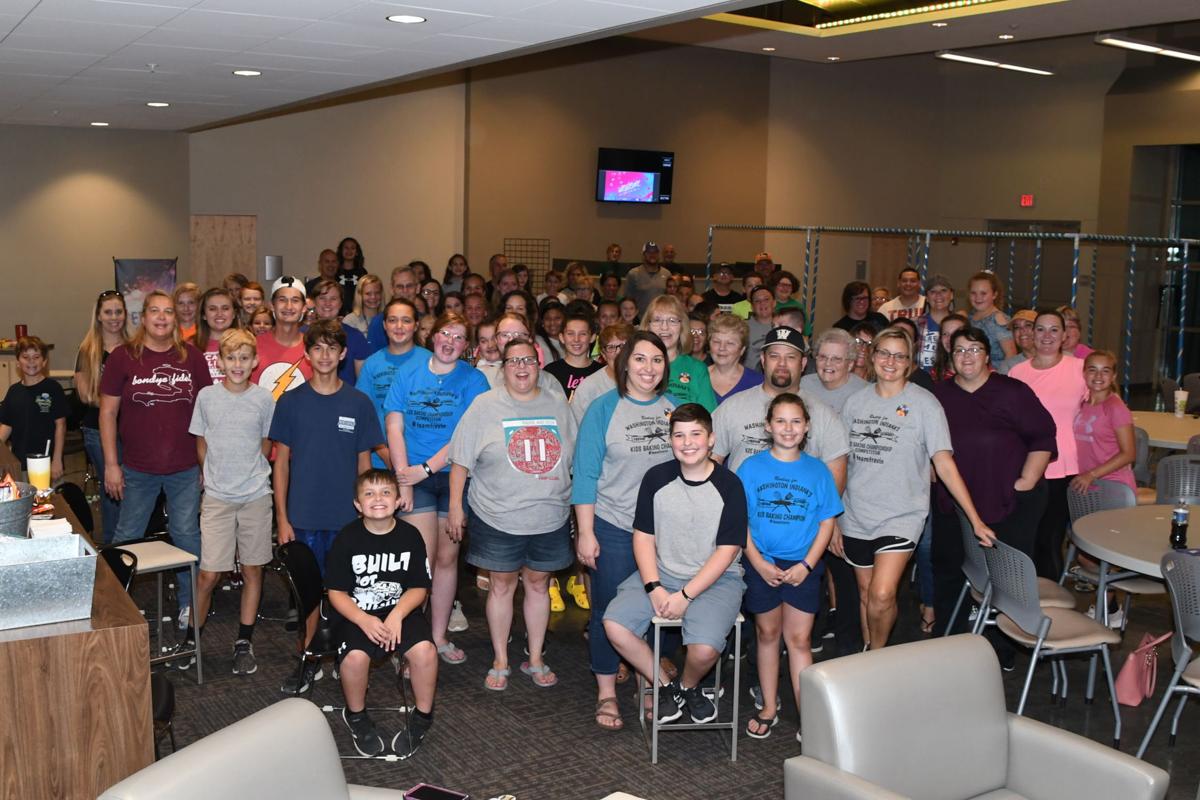 Trevin Alford joins a group of his friends at Bethany Christian Church to watch the Kid’s Baking Championship on the Food Network. Alford, a student at Washington Junior High, is one of the contestants on the show.

Trevin Alford poses for a photo in front of the one of the large TV’s at Bethany Church during a segment of the Kid’s Baking Championship featuring himself.

Trevin Alford joins a group of his friends at Bethany Christian Church to watch the Kid’s Baking Championship on the Food Network. Alford, a student at Washington Junior High, is one of the contestants on the show.

Some believe everyone in the world is separated by a mere six degrees; however, Trevin Alford may be separated from $25,000 by a mere 350 degrees.

The 350 degrees is the cake-baking temperature Alford, a Washington native, likely will use in his appearance on the finale of Season 7 of the Kid’s Baking Championship, which appears on Food Network. The finale will be aired at 9 p.m. Monday. The $25,000 is the prize money awarded to the sole winner of the championship.

Alford, who turned 13 years old in July, is keeping the results secret, as is his family, parents David, Carrie and 10-year-old sister Taylin.

“Keeping the secret is tough,” David Alford said Monday just prior to the watch party, which is open to the public at Bethany Christian Church. “But watching with all these friends makes having to keep the secret more tolerable and also makes the experience even more amazing.”

The amazing experience was a dream for Trevin, but not a dream any in the Alford family thought ever would become a reality.

According to Carrie, Trevin has been watching the Food Network for about six years. His interest in baking piqued a couple of years ago when he attended an Arts Venture Camp in Vincennes. It was there he received hands-on cake decorating advice, which really interested him.

“After that, he spent time on the internet researching baking,” Carrie said.

That research helped him mature as a baker and fed his cake-baking interest. His interest grew beyond that of treating just his family as his interest blossomed into a legitimate cake business. Baking for others is what triggered Trevin’s improbable appearance in the Season 7 Kid’s Baking Championship.

That six-degree separation put into motion a chain of events that began with notice of a casting call and resulted in an in-person audition.

“We had to complete an online application and submit a three-minute video,” Carrie recalled, “and I had no idea how to do make a video; fortunately, I found something online to help me.”

The application and video caught the attention of the baking show’s production team, and more videos and interviews were conducted.

One of the more surprising requests, initially, was for a video of Trevin’s bedroom. David said Trevin’s room, which looked like a typical teenager’s room, had to be cleaned well before it could be filmed.

“In Trevin’s defense, the house was a mess because the kitchen was being remodeled when the family learned that a video was needed,” David pointed out.

“I later found out that video of the bedroom was intended to give the producers insight into Trevin’s personality,” Carrie said.

His personality, skill and composure combined to impress the show’s producers, who arranged for Trevin to be flown to Culver City, California (just outside of Los Angeles), for yet another audition.

More than 4,000 youths applied to be one of nine contestants. The Food Network flew 11 contestants to the studio; nine were selected.

Carrie and Trevin flew May 22, and David and Taylin followed three days later; none knew whether or not Trevin would be selected for the show.

The parents tried to temper expectations.

“I don’t mean this badly at all, but those of us who know Trevin know he is good at a ‘Washington’ level, but didn’t have any idea if he would be able to compete at a national level,” David said. “We never were 100% comfortable.”

The family’s comfort level improved tremendously after the first competition when Trevin’s creation was deemed best of the group and he received a much sought-after apron autographed by the show’s two hosts, Valerie Bertinelli and Duff Goldman. That apron was the first that was made available as a prize in the show’s previous six seasons.

“That win was when David and I looked at each other and said, ‘He can compete, can’t he?’” Carrie said.

Trevin has competed well and has made his way to the final.

The final show of Season 7 will be aired Monday, and the Alford family is ready for the series’ end.

“Keeping the secret has been agonizing,” David said, adding that the family finds it surreal as it watches one of its own on national television.

The family also finds itself blessed that so many people watch the show with them at their church.

The public is invited to attend the watch party at Bethany Christian Church. Doors open at 8:30 p.m. No admission is charged.