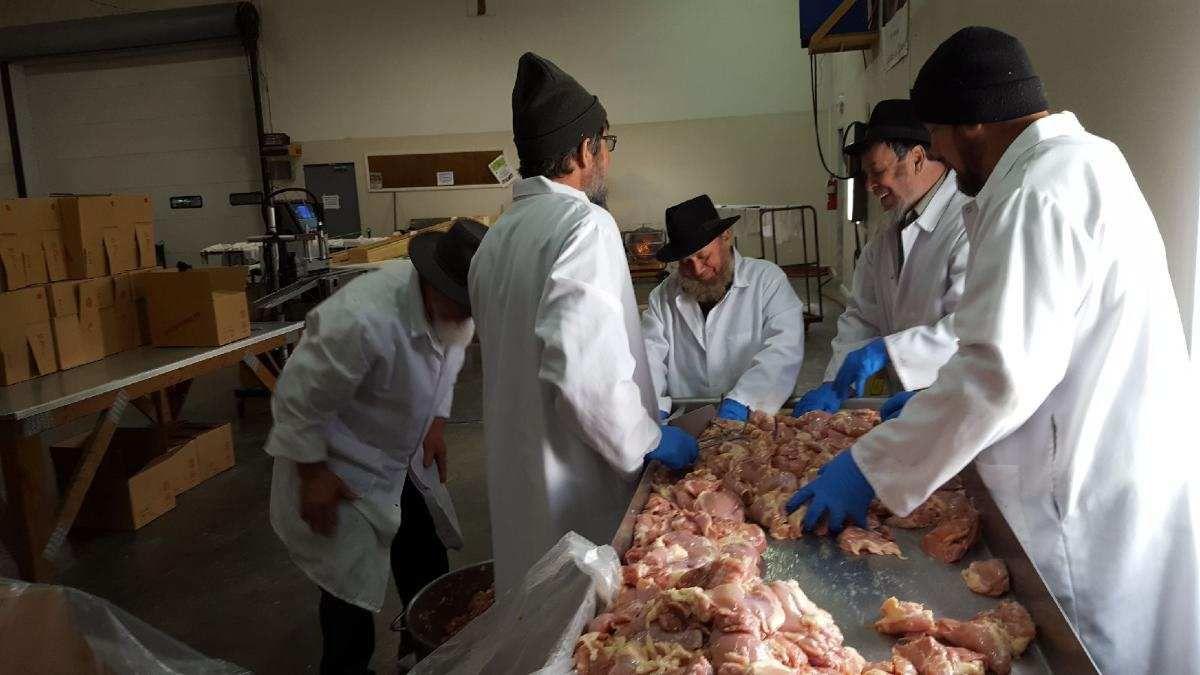 Local Amish and Mennonite volunteers work on grinding some 25,000 pounds of chicken for canning as part of the Mennonite Central Council relief effort. 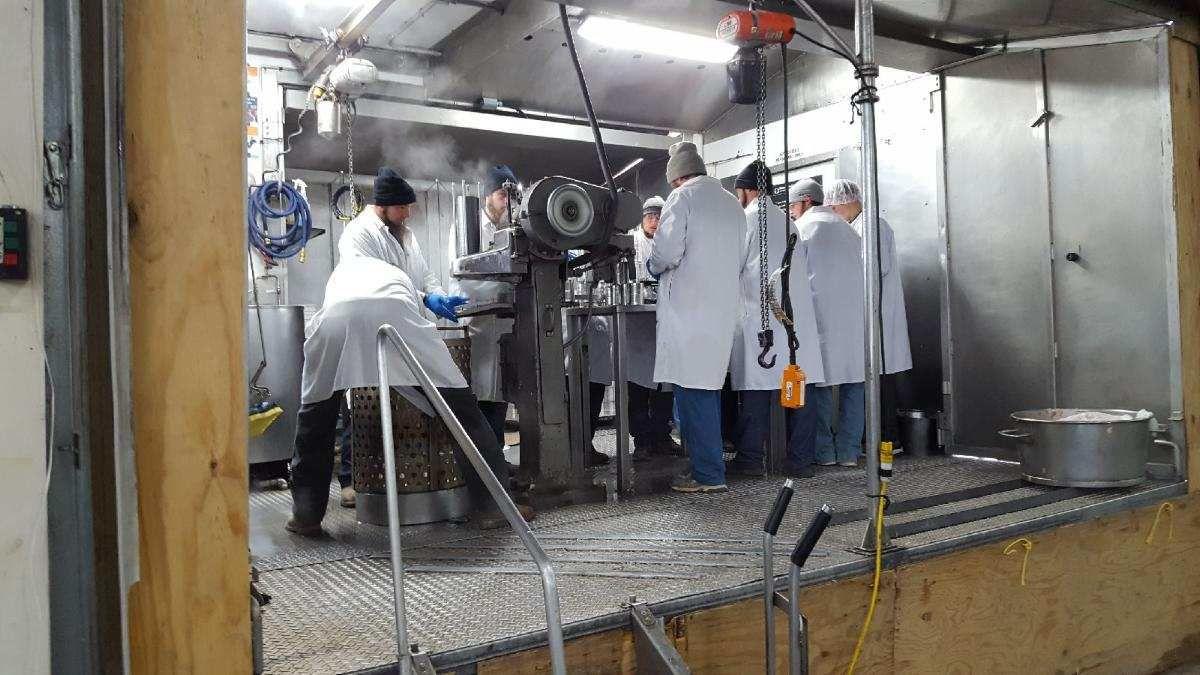 Volunteers work on the meat canner at the Mennonite Central Committee relief effort at Dinky’s. 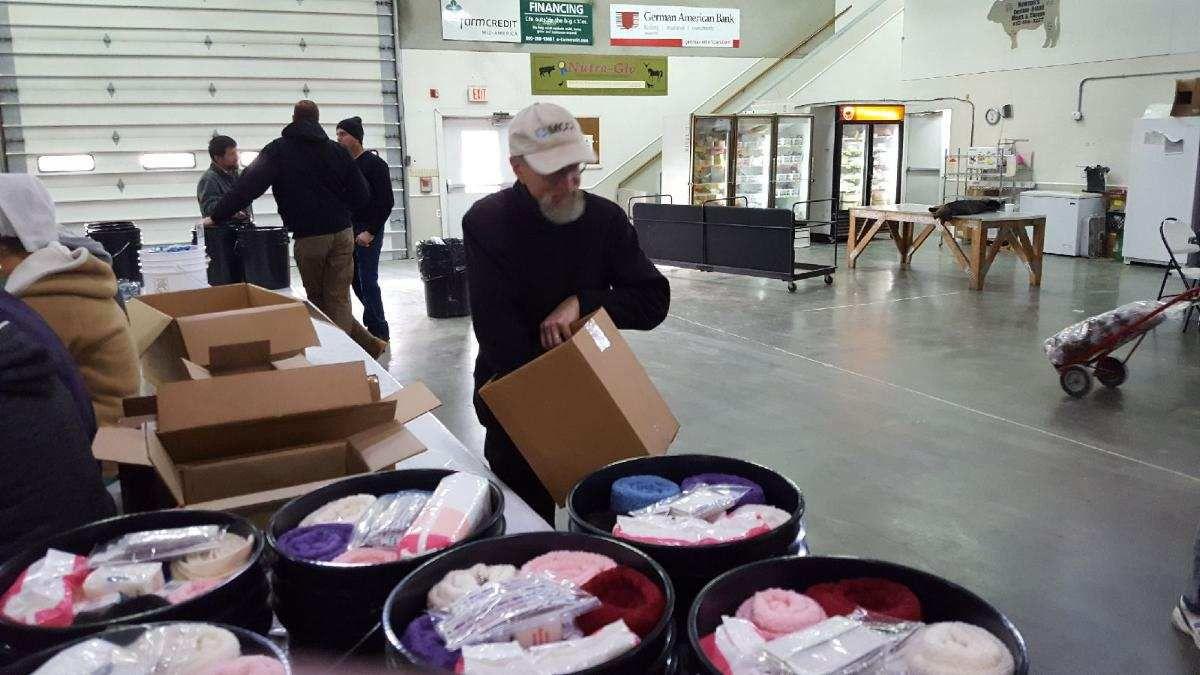 Les Gustafson-Zook with the Mennonite Central Committee works on items to help fill some 800 relief kits.

Local Amish and Mennonite volunteers work on grinding some 25,000 pounds of chicken for canning as part of the Mennonite Central Council relief effort.

Volunteers work on the meat canner at the Mennonite Central Committee relief effort at Dinky’s.

Les Gustafson-Zook with the Mennonite Central Committee works on items to help fill some 800 relief kits.

The troubles in the Ukraine are nothing new to the Mennonite Central Committee. The organization was formed 100 years ago in response to a disaster in the Ukraine. “Our organization started feeding people initially as a result of a drought and conflict in the Ukraine and Ukrainian Mennonites sent messengers to North America saying we are starving to death,” said Les Gustafson-Zook, constituent services coordinator with the Mennonite Central Committee. “Mennonites across the entire spectrum from the very conservative to the more progressive decided they could work together to get those Mennonites food and safety.”

That action 100 years ago is still resonating through the Amish and Mennonite community annually with a meat canning program that helps provide relief around the world. This week the mobile canner, which operates across the United States and Canada from October to April, is set up at Dinky’s in western Daviess County where volunteers are canning around 25,000 pounds of chicken.

“This is all organized locally,” said Gustafson-Zook. “This is a local crew of people that organize all of these volunteers. The canner, which is the only mobile sanctioned canner by the USDA, just pulls up and the crew puts things together. Everybody is a volunteer here.”

The meat canning covers about three days and includes about 60 volunteers doing the various jobs that are required to make certain the meat is ground, cooked, canned and labeled and ready to go.

“The Mennonite Central Committee appreciates the way these volunteers pull their crews together and make this happen,” said Gustafson-Zook. “We get to be on the other end where the food is being distributed to people who are in crisis and recognize how that food is helping them and they really appreciated it.”

The crews come from all over Daviess County, volunteers from the Mennonite and Amish churches. “All the local churches are really good about helping,” said Samuel Graber with the Amish Church. “It’s a lot of work, but when we get done it is a really good feeling. It sure is better to be on this end than the receiving end.”

And while the MCC could just send the meat off to a factory and have it canned, there is an additional reason of faith that leads them to continue to do the mobile hand canning in the local communities.

“When it is done here by hand their prayers of blessing go in each of these cans that bless people on the other end in various ways,” said Gustafson-Zook.

Besides raising enough money for the meat, the local organizers put together an additional $15,000 for more than 800 relief kits filled with towels, tooth brushes, soap and other personal items.

“It is a collection of things that help give people dignity and respect, especially in their situation,” said Gustafson-Zook. “It is another way of providing hope to vulnerable people around the world.”

“So much of our work is responding to help people who have been displaced because of conflict,” said Gustafson-Zook. “If we can be pro-active with peace-making, which we also believe to be a calling from Christ, then we can prevent situations that can explode into larger problems.”

While no one knows exactly where the meat being canned in Daviess County will eventually wind up, the history of the organization makes it clear it could be almost anywhere in the world where natural disasters or conflicts leave people displaced and in need.

Last year that included more than 670,000 cans of meat, some of which wound up once again in the Ukraine.