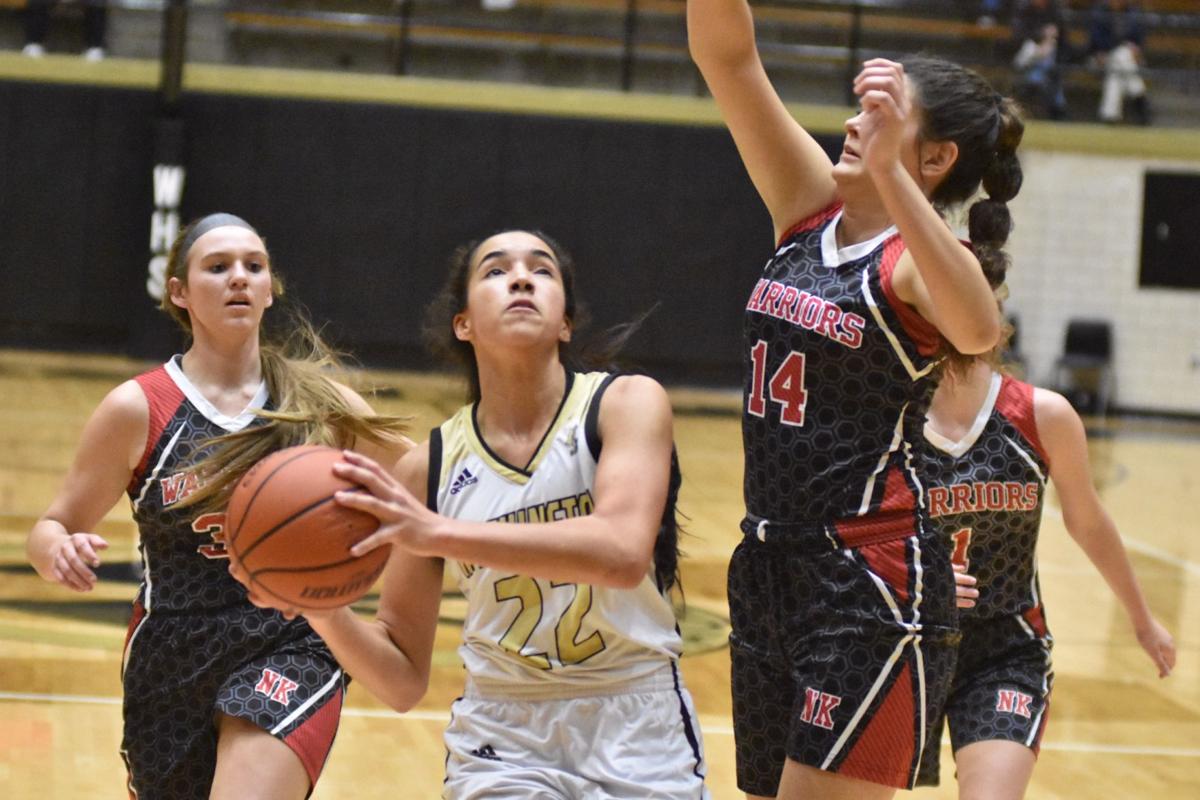 Alaina Thorne of Washington goes up for a basket earlier in the season. 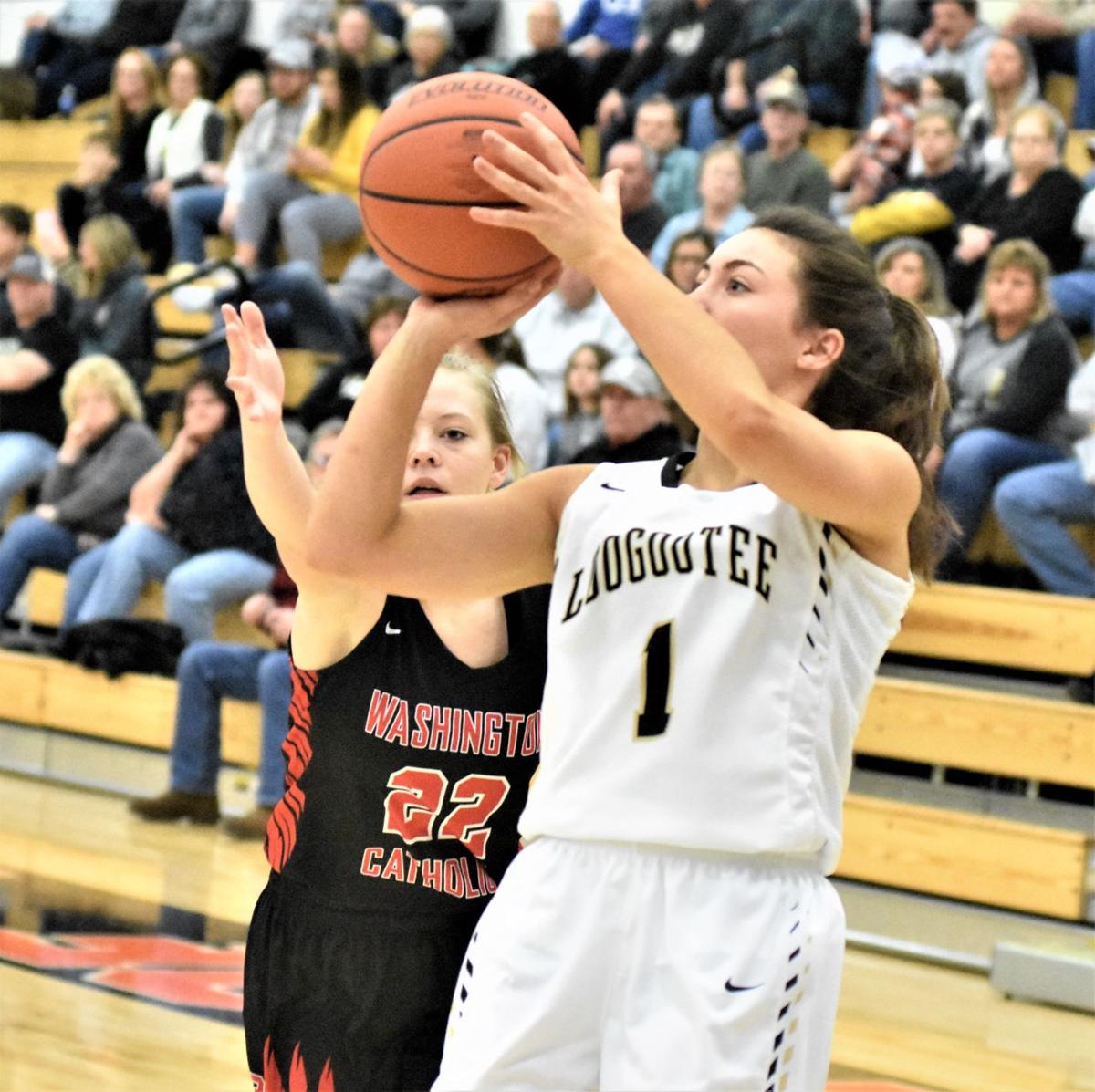 Loogootee’s Kalea Fleming puts up a shot during sectional.

Alaina Thorne of Washington goes up for a basket earlier in the season.

Loogootee’s Kalea Fleming puts up a shot during sectional.

It has been a long time since the Washington Lady Hatchets or the Loogootee Lions could lay claim to the title of sectional champions. However, both schools not only earned that title, they did it in an impressive manner.

WHS, who has been on the cusp of winning a sectional title for the last several years under coach Gretchen Miles, defeated both Vincennes and Sullivan to move on to the Charlestown 3A Regional. Loogootee, who has been ranked at the top of Class A most of the year, won three games at the North Daviess Sectional and now moves on to West Washington.

The Lady Hatchets have had their best season in two decades with 21 wins, the most for a WHS girls team since Miles was a player. They have used the 1-2 punch of sophomores Alaina Thorne and Kencia Levasseur to come up with nearly 30 ppgs. Sophomore guard Jesse Ledgerwood, who missed her entire freshman season due to a knee injury, has also stepped up as a 3-point weapon, especially since senior Melida Ajradinoska was essentially lost for the season.

The rest of the Hatchets senior class has done a great job of providing much of the foundation with Quincee Healy, Ali Barber and Hadley Faith each bringing a different skill set to the table. Jade Browning has also provided an impact after returning from an early-season injury.

Thorne leads in points (15.4), assists (2.8), steals (2.0) and blocks (.4), while Levasseur leads with 7.9 boards a game and is also contributing 13 points. Ledgerwood leads the team with a 37% 3-point average, nailing 25-67, while Healy has made 13-46 and Barber has made 12-38. The core of the team has come from the school’s most successful tennis program last spring, and a greatly improved volleyball team in the fall.

However, the Hatchets now go in to what might be the toughest 3A regional in the state, with four teams in the 3A top 10.

The Lady Hatchets will play No. 7 Salem, who comes in at 22-3, while the first game will feature Greensburg and Memorial, both at 23-3 and ranked No. 5 and 6, respectively.

Salem’s losses have come to 3A No. 2 Brownstown Central, West Washington and 26-0 Crown Point of 4A. The only common opponent they have had is Mitchell, a team Salem beat by 40, while WHS struggled to a one-point win. Salem earned its regional spot with a 54-52 win over highly-ranked Silver Creek.

“Salem is a very versatile team. They get up and down the court quickly and rely on their dribble drive to the basket or drive and kick out for 3-pointer in their offense. They are very long and athletic and have great size and have multiple players that can score in bunches,” said Miles.

Miles added, “When you get to this part of the state tournament, everyone has earned a right to be here, because they had to beat teams to keep moving on and the competition level increases a great deal. Our kids are very excited to be able to continue their season. They showed a lot of poise and toughness in the sectional and we continue to have all players stepping up to make plays on either end of the floor and they continue to do their job.”

With the win, the Hatchets would play Memorial or Greensburg. Memorial defeated WHS by 12, 67-55 in early January. WHS had the game tied at 27-all at the half, but a strong third quarter was enough to push the Lady Tigers to the win. The Tigers are led by Riley Anslinger, a junior who gets 16 points a game, while Peyton Murphy gets right around 10.

The Lady Lions will travel to West Washington for its Class A regional match-up with Trinity Lutheran. The Lions come in on top of the Class A poll with just two losses. At 22-2 they dominated the North Daviess Sectional, defeating North Daviess, Washington Catholic and Orleans. The only blemishes on the year were a loss to Linton and Columbus East. They did beat Washington, 53-49 in OT and had a two-point win of Rivet as well.

Loogootee is a junior-heavy team, starting four juniors and a sophomore. Brooklyn Jones, Kalea Fleming, Makenzie VanHoy and Isebelle Waggner are all starters from the junior class, as Kylie VanHoy is the lone sophomore. LHS does have a pair of seniors in Chelsie Sutton and Danielle Abel. Jones leads with about 15 ppg, while Fleming kicks in 12, and the VanHoy sisters combine for 17, with Makenzie getting nine and Kylie adding eight.

Coach Brian Smith, a former boys coach at Shoals, is 89-32 in his five years there, including a 47-6 mark in the last two seasons.

Trinity has also been a power in Class A. going 23-3. Two of their three losses came to top-ranked 3A Brownstown Central and to 4A Madison.

“They have several 6-footers that start and one that comes off the bench. Their size will be our biggest problem. We haven’t had great luck against teams with a lot of size,” said Smith.

The Lady Cougars are led by 5-9 freshman Bailey Tabeling, who is getting around 22 ppg, four rebounds and right around 3.5 assists. She has had three games with at least 32 points and 26 against Orleans. Sydney Jaynes, a 6-2 junior, who is getting 16 points a game, three blocks and nine rebounds. Hannah Sabotini is another 6-footer, getting just under nine points and four assists per contest.

“Their point guard (Tabeling) is really something. She can create her own shot and is a freshman. No. 33 (Jaynes) leads the team in blocks, she is tough to defend. We know to win we are going to have to rebound and defend. I think if we are able to create baskets off our defense and get out in transition we will be OK. We feel like we have four or five girls that can score, especially if they get an open shot.”