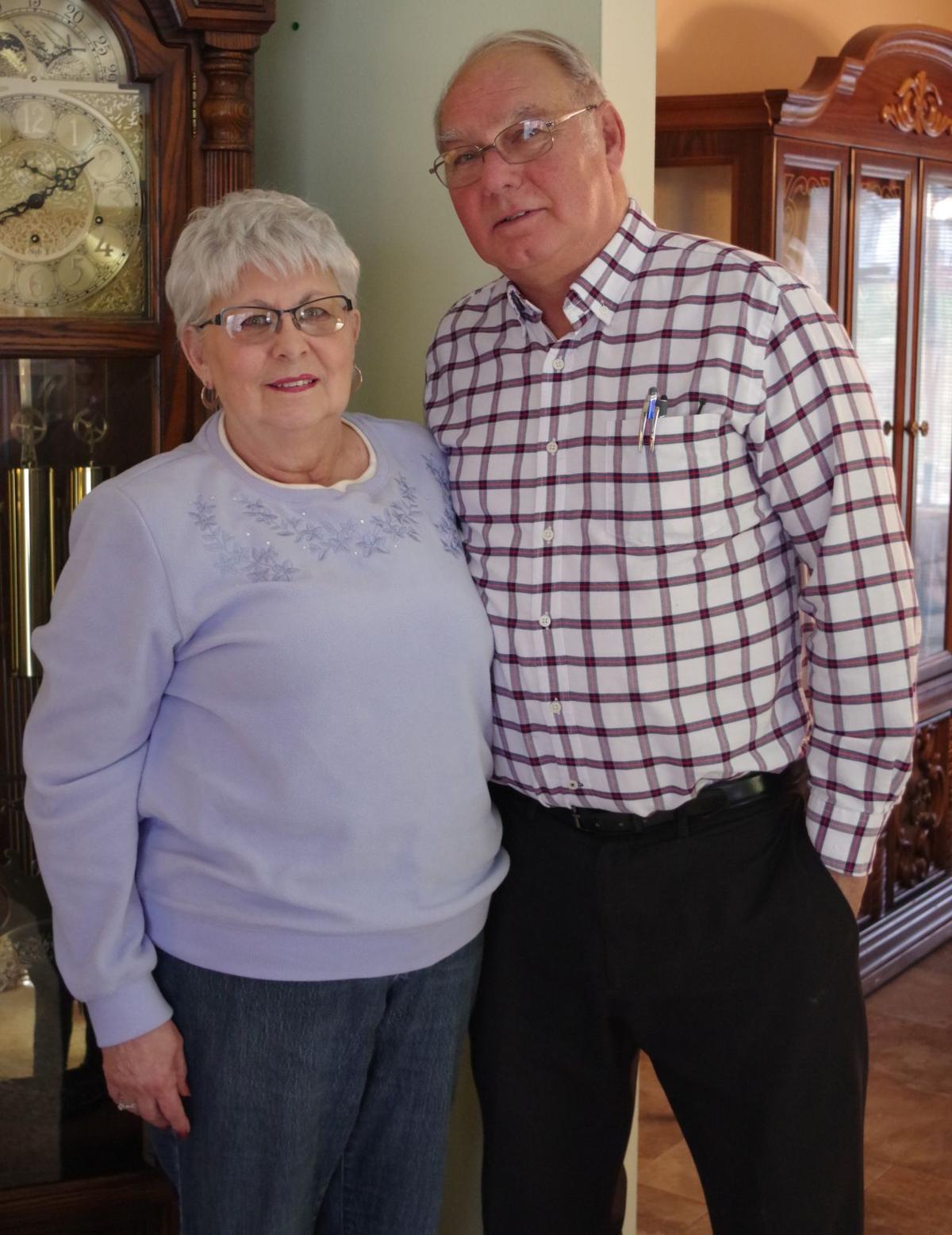 At left, Kay and Bryan Walden have been married 56 years. The couple met in 1960 while attending a church camp. 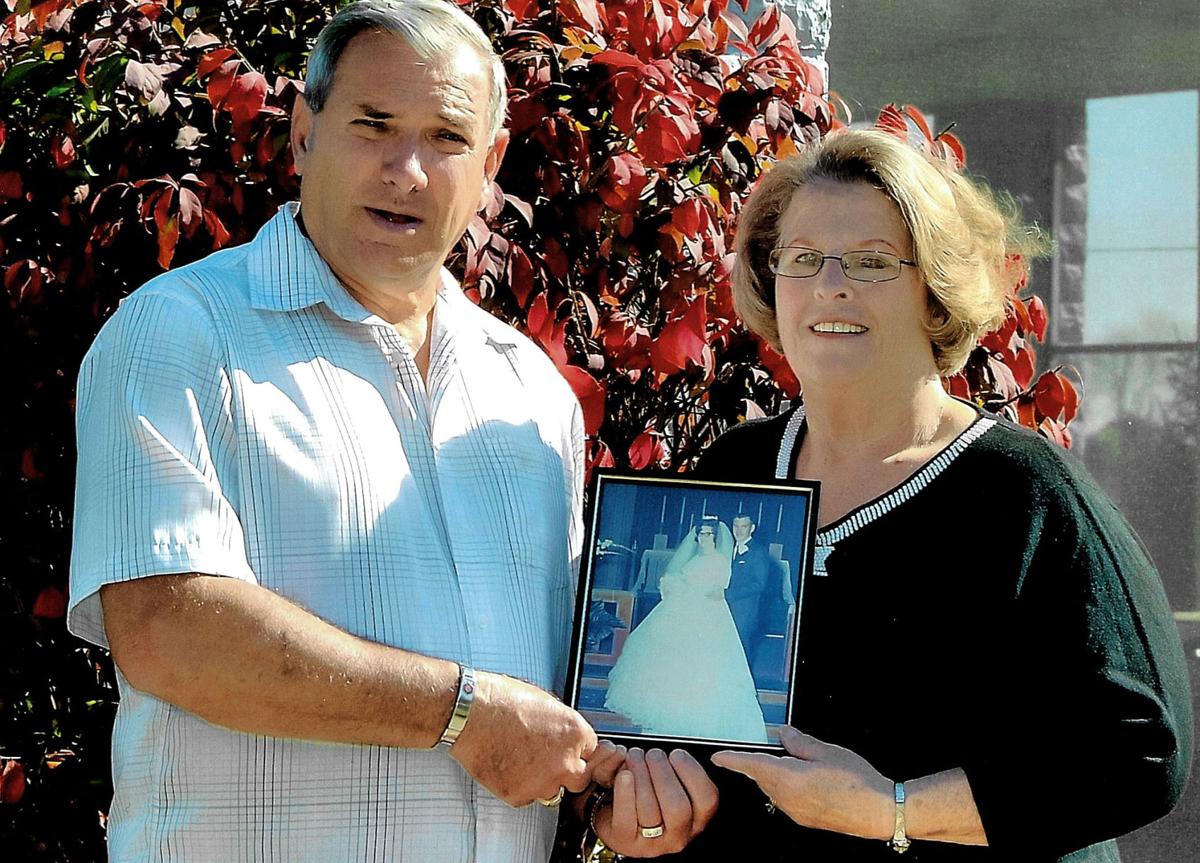 Above, Dave and Margaret Brummett met in 1962 and got married in 1964. This photo was taken on the couple’s 50th anniversary. 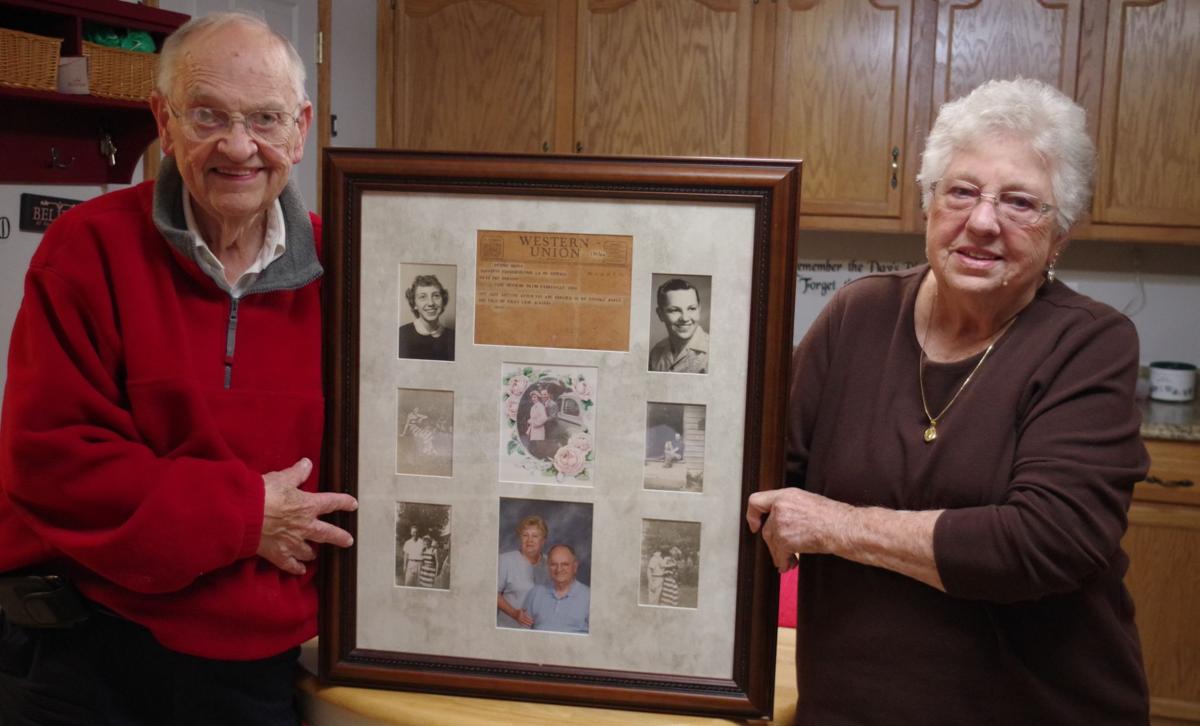 At top, Don and Pat Cosby have been married 66 years. Here the couple show several photos from their years together as well as the telegram Don sent Pat telling her to set a date for their wedding after Aug. 1, 1953. 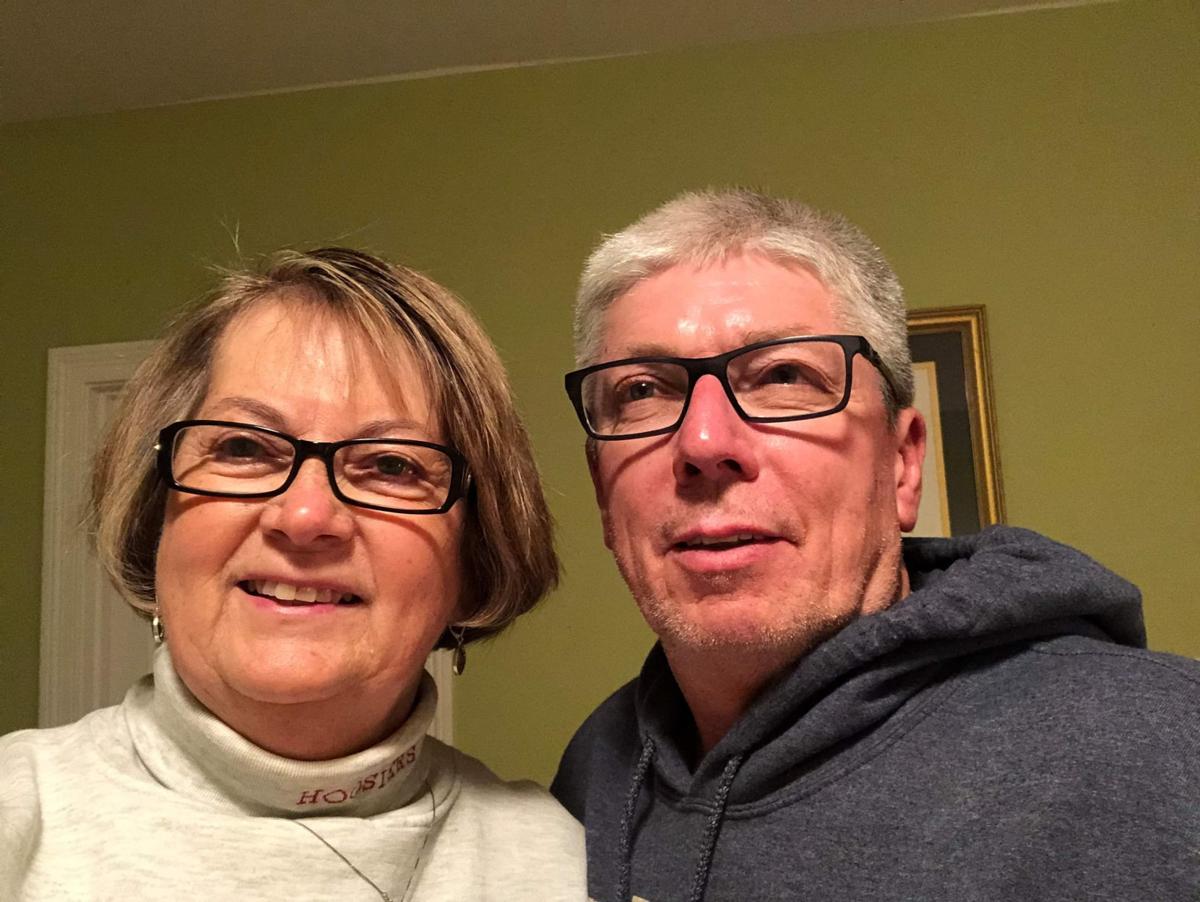 At left, Kay and Bryan Walden have been married 56 years. The couple met in 1960 while attending a church camp.

Above, Dave and Margaret Brummett met in 1962 and got married in 1964. This photo was taken on the couple’s 50th anniversary.

At top, Don and Pat Cosby have been married 66 years. Here the couple show several photos from their years together as well as the telegram Don sent Pat telling her to set a date for their wedding after Aug. 1, 1953.

There are some things about Valentine’s Day that are very cookie cutter. There are only so many types of flowers and boxes of candies to choose from. Love stories, though, are each unique, especially those of these four Daviess County couples.

Don Cosby had had his eye on the then Pat Howard for quite some time.

“She was younger than me and people would ask me why in the world I would want to date anyone that young,” said Don, who waited until Pat was 16 and in high school to finally ask her to go steady. “I graduated in 1949 and she graduated in 1952.”

“He was so attentive and so good to me,” said Pat.

There was just one problem. Don was not Catholic. He was Baptist.

“Back then, Catholics took marrying outside of the church very seriously and while my parents liked Don, they didn’t want me to get too serious with him. Don’s parents were also nice to me but I had heard they felt the same thing about me,” said Pat.

In 1951 Don learned he would either enlist in the service or be drafted. He decided to join the Air Force. The Cosbys and Howards both thought that separation would lead the two to other people and it sort of did temporarily.

While Pat was still in school, the other boys knew she wasn’t available. After all, she still wore Don’s graduation ring. Once she graduated, Pat took a job with Western Union Telegraph Company and landed her first job in Evansville. She and Don were still exchanging letters but one day, Pat’s sister, Charlotte, came to visit. The two Howard girls managed to meet two soldiers from Camp Breckenridge in Kentucky at a bowling alley. The soldiers asked the sisters to bowl with them and to go out for snacks.

“And one thing sort of led to another,” said Pat with a chuckle. “My sister and I spent a few weekends with the two soldiers and I found out the one I’d been seeing was Catholic.”

Pat started dating the other soldier and even went so far as to bring him home to meet her parents. Feeling torn between the two men, Pat’s father told her she needed to tell Don.

“I loved Don but felt like marrying someone who was Catholic was what I was supposed to do,” said Pat, who actually got engaged to the soldier and put down a payment on a wedding dress. “I wrote Don a letter telling him what was going on and then a few days later, I received a big box in the mail.”

The contents of that box nearly broke Pat.

“Inside was everything I’d ever sent him. Every picture and the record player and records I had given him was in that box,” said Pat. “I’d wrote him a sad letter but I just didn’t expect him to send everything back.”

Don said he sent back everything that reminded him of Pat.

“Then two weeks later, I was sitting in the day room down in Shreveport, Louisiana, when someone came in and told me I had a call I needed to pick up in the mess hall,” said Don.

Thinking something bad had happened back home, Don went running. When he picked up the dangling phone, it was Pat’s mother on the other end.

“Her mother had taken the bus to Evansville and called me from the bus station to tell me Pat was so upset she didn’t know what to do with her,” said Don. “She wouldn’t eat. She wouldn’t sleep. Her mother asked me if there was some way we could get things worked out.”

Don arranged a three-day leave. The couple talked it over and at the end of the three days, Don headed back to Louisiana.

“I told him I loved him and that I had made a terrible mistake,” said Pat.

“I told her I needed to think about it,” said Don.

A few days later, a telegram came across Pat’s desk that, ironically, was meant for her. That telegram told her to pick any day after Aug. 1 for them to get married. Pat cancelled the wedding dress she’d already purchased, wrote a note to the soldier she’d been engaged to and on Aug. 4. 1953, the couple married in a small ceremony on the base where Don was stationed.

The two are still very strong in their faith and both are active in their own churches.

“I’ve gone to his church as a guest a few times and he’s come to mine,” said Pat, who said their children, as per the Catholic church back then, attended church with her.

The Cosbys laugh now when sharing their story.

“That’s because God meant for it to happen,” said Pat with a smile.

In 1962, Margaret Dunn met Dave Brummett while riding around in Vincennes with some of her girl friends.

“I was from Decker and one of girl friends was friends with Dave’s friend,” she said. “I always laugh I was a pick up on Main Street.”

And she was. Just two years later the couple married.

“We got married in November of 1964, in December I graduated from beauty school and then just a couple of months later, Dave got drafted,” Margaret said.

“I served in Vietnam and then was eventually state-side again,” said Dave.

While Dave was serving his country, Margaret moved back home.

“We didn’t have children at the time so it just made sense,” she said, adding being apart created some challenges for the young couple. “We’ve had our ups and downs like all couples. I think the most important thing is for people to not give up on each other. You have to work through things. None of us are perfect.”

Kay and Bryan Walden first met a church camp near Poland, Indiana, in 1960.

“My Dad was the director and I had gone over the list of attendees,” said Kay, who said a boy named Tom was her goal for the week. “Tom had brought a friend and that was Bryan.”

While he may not have been her first choice, Kay was Bryan’s first choice and really only choice.

“I said I was going to marry her someday,” said Bryan with a laugh. “They told me I didn’t want to mess with her because she was the director’s daughter.”

Someday came in Sept. 7, 1963 when the couple tied the knot. Then things got really busy for the newlyweds.

“We got married and the following Monday, I started my freshman year at Indiana State. Our daughter was born two weeks before I graduated in August of 1967 and not long after that we moved to Elkhart where I had my first teaching job,” said Bryan.

It was in June of 1969 the couple put down their roots in Washington. Bryan was a teacher at Washington High School until 2004 and Kay landed a job working for what would eventually become Old National Bank. She retired in 2007. Bryan then began working at JayC.

Church camp never really stopped for the couple. While they were dating, it wasn’t uncommon for Bryan to come over to Mitchell to help Kay’s father build Spring Mill Bible Camp.

“I helped build a lot of what’s there with native lumber,” said Bryan.

In 2013, the couple decided to move to Mitchell to serve as the directors of the bible camp Kay’s father had started. Bryan was also able to transfer his job to the Mitchell JayC store.

The Mitchell grocery store closed in March of 2018 and Bryan started making the trek back and forth to the Washington store. After retiring as camp managers later that year, the couple made the move back to Washington.

“Church has always played a big role in our marriage,” said Kay.

A lunch at Yolonda’s Bistro one afternoon in 2018 started a new adventure for a Washington couple.

Rory Lee was dining at the former Main Street eatery with his daughter something they’d been doing frequently after his wife, Lisa, passed away.

On this particular day, Jodi Parsons was also enjoying lunch at the restaurant.

“I had hoped she would come by our table,” said Lee, who said he always thought Parsons was not only personable but pretty. “I always thought she had a pretty smile.”

Parsons did pass by his table.

“I asked him how he was doing and told him it was important to get out and do things,” said Parsons, who lost her husband, Ken, on Nov. 19, 2017. “As a social worker, I don’t want to see people struggling and depressed. I want to encourage people.”

After her husband died, Parsons said she started writing daily devotional and sharing inspirational messages on Facebook. Lee and two daughters, Brogan and Madison, were on vacation when he saw one of Parsons’ posts. That post sparked casual conversation between the two.

Those conversations led Lee to drop by Parsons’ home after returning from vacation.

“We just really started talking,” said Parsons, recalling the moment fondly. “Then one day I was playing golf in the ladies tournament and I got this text from Rory saying he saw this beautiful woman on the golf course.”

The two had a lot in common. Even Dr. Stephen Cullen pointed that out.

“Dr. Cullen had been my doctor for quite a while,” said Lee. “He was telling me he had a friend and he thought we had a lot in common. I asked him who it was and he told me it was Jodi.”

“Ken and Dr. Cullen were like brothers,” said Parsons. “I thought it was really something for him to say that.”

Confirming what Lee and Parsons were kind of already thinking, the two met up for a camping trip with Parsons’ children.

Not long after, Parsons started traveling more but the two talked daily. While Parsons was gone, Lee would often come by to do yard work.

“People thought he was my gardener,” said Parsons with a laugh.

“And I didn’t realize she had someone come by to mow the yard,” said Lee with a chuckle.

When she was home, the two started spending more time together but they promised they wouldn’t date until a year after Parsons’ died. They didn’t but they still grew closer.

Once they did start officially dating, the adventures really began.

“We started going places I never would have otherwise been,” said Lee, who said he and Parsons have traveled quite a bit.

On June 22, 2019, after first getting approval from their families, Lee and Parsons tied the knot. It was exactly one year since the two had crossed paths at Yolonda’s.

“I feel like a teenager again,” said Parsons, a wide smile sweeping across her face. “And we can talk about anything.”

That anything includes the spouses they lost.

“God had his hands on this whole thing,” said Parsons.