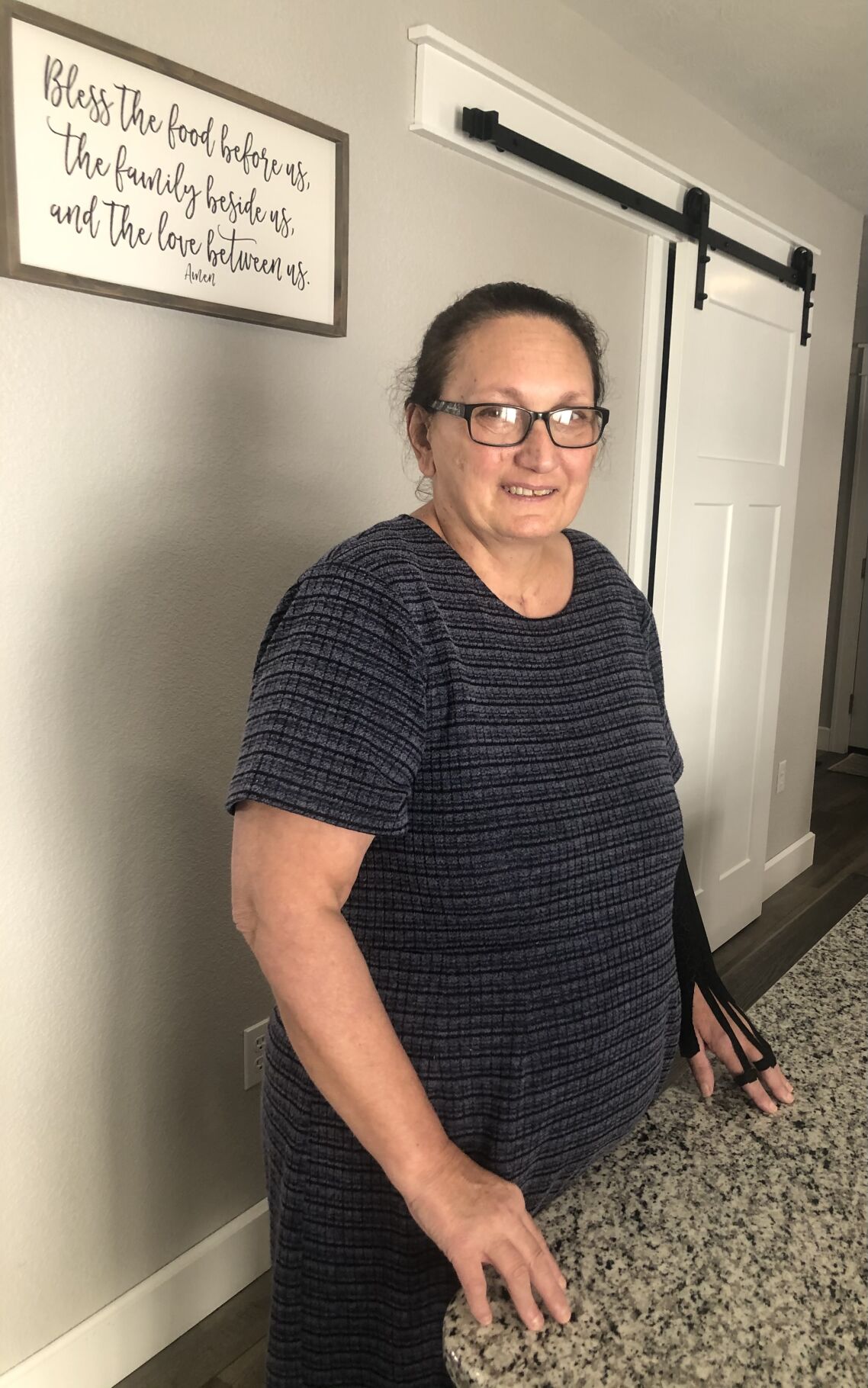 Tina Stoll spent 50 days in the hospital battling COVID-19 and 31 of those were spent on a ventilator. Stoll was released from the Daviess Community Hospital rehabilitation until just in time to celebrate her 52nd birthday at home on Feb. 9. 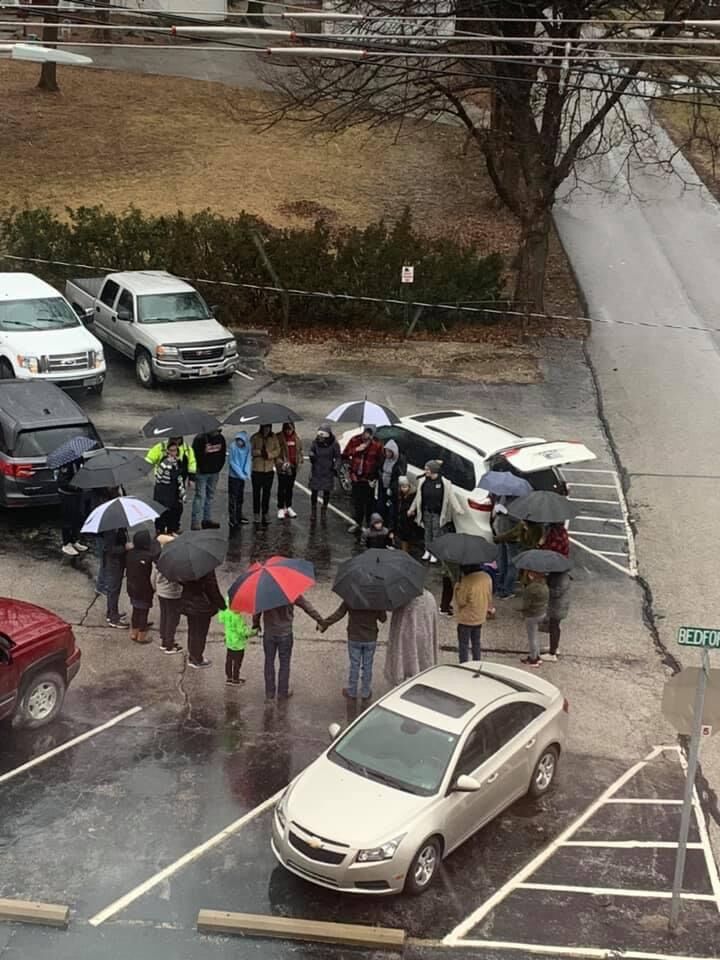 Tina Stoll spent 50 days in the hospital battling COVID-19 and 31 of those were spent on a ventilator. Stoll was released from the Daviess Community Hospital rehabilitation until just in time to celebrate her 52nd birthday at home on Feb. 9.

It all started innocently enough. Tina Stoll thought she just had a little cough. That cough, just a handful of days later, turned into a trip to Daviess Community Hospital’s emergency department.

“I thought I was having a heart attack,” said Stoll.

It wasn’t a heart attack though. Instead, Stoll was diagnosed with COVID-19 just a few days before Christmas.

“They gave me a steroid, antibiotics and breathing treatments,” said Stoll, who said at that point, she thought she was on the road to recovery. “I felt better on that following Monday.”

That all changed quickly though.The next day, Stoll called her sister, Cheryl Graber, and was taken back to DCH.

“I was admitted and they gave me plasma. I remember I started shaking really bad and they threw a blanket on me. After that I don’t remember anything until I woke up on Jan. 8,” said Stoll.

Graber remembers it all though.

“She got a little better. Her oxygen levels were good and they were talking about dismissing her,” said Graber.

That was just the beginning of a nightmare that would last nearly two months and leave the then 51-year-old mother on a ventilator for more than month.

Around 2 p.m., Stoll called her sister and told her the hospital had decided to put her on a ventilator.

“I talked to Tina then and she said she was OK with what they were planning to do,” said Graber, who is a nurse at Barr- Reeve. “They took her to St. Vincent but they had some issues with the vent and had to bag her the whole way to Evansville.”

After a few days, Graber said the hospital staff told her and the rest of the family that the best course of action was to temporarily paralyze Stoll and put her on her stomach.

“They told us the next steps would just be whatever her body was able to do,” said Graber.

Later that day, the doctors called to tell them that Stoll’s condition was declining.

“We put together a prayer vigil at our church, First Mennonite. We had that at 3 p.m. and later that night, Tina started improving,” said Graber. “It was like God turned everything around.”

“They told us Tina would probably linger about a week and then she would pass,” said Graber, who said at that time, her sister was on 100% vent but her oxygen level was still 70%.

With little more the medical community could do to help Stoll, the family signed a Do Not Resuscitate order but that didn’t stop them from praying that their loved one would be healed.

“There was someone outside the hospital almost every day,”said Graber. “We would pray and we would sing to Tina.”

And although she was unconscious, the family continued to communicate with her through modern technology and with the help of the nursing staff.

“Out sister-in-law Amber Jo started us on Marco Polo app last year,” said Graber, who admits in the beginning she was not fond of the app. “I’m so glad now that she did because I really think it helped Tina know that she wasn’t alone. We couldn’t be in there with her but we were still there for her and praying for her.”

“I don’t remember any of that,” said Stoll. “But I really do believe that I could sense that they were there.”

Jan. 2, Stoll had improved enough the DNR was taken off but doctors still gave the family little hope.

“We never stopped believing that Tina would be healed,” said Graber.

The next day, Graber said the medical staff also gave the family hope that Stoll would defeat COVID.

“One of the nurses said,”When she gets home,’” said Graber. “And that changed everything. That was the first time we really felt any hope.”

“All I could see was my husband in a chair and all these nurses and machines but I had no idea where I was,” said Stoll, who spent 31 days on a ventilator. “I really thought I had been in a wreck.”

It took about a day for Stoll to become more aware and up to speed on what had happened. Just a day after having the vent removed she was also off her oxygen except at night. A week later, she was sent to Select Specialty Hospital.

“When the doctor saw Tina, his eyes were huge and he told us she was going to great in therapy because she had done what was not humanly possible,” said Graber, who said to help Stoll continue on the road to recovery, the family did therapy with her to help get her stronger.

Just 10 days later, Stoll was released and sent back to Daviess Community Hospital to continue therapy. She spent just over a week there before coming home just in time to celebrate her 52nd birthday.

“That was goal,” said Graber. “We wanted to have her home for her birthday on Feb. 9. and we beat that goal.”

In all, Stoll spent 50 days in hospitals.

Stoll is still attending physical therapy sessions at the CORE Center but is progressing well. Her left arm still hasn’t woke but she’s mobile again and getting stronger every day.

“I was just so blessed to be covered in prayer,” said Stoll. “I’m just really blessed to still be here.”

Stoll’s COVID diagnosis may have been the most critical but it wasn’t the only brush with the virus the family experienced. Graber and another sister also had bouts with COVID-19.

Still, the family believes you can’t live in fear.

“You can’t live in fear. God is in control. Yes, we must take precautions — wash hands, practice good sanitation, stay home if we are sick — even if we think it’s just a cold but to shut down and not live is not going to save you,” said Graber. “We all must be prepared and ready at any moment. I’d rather live until I die rather than die before I can live with happiness and people around me. I won’t take away the idea that it can be serious and fatal for some but God definitely was not done with Tina because she is a true miracle.”