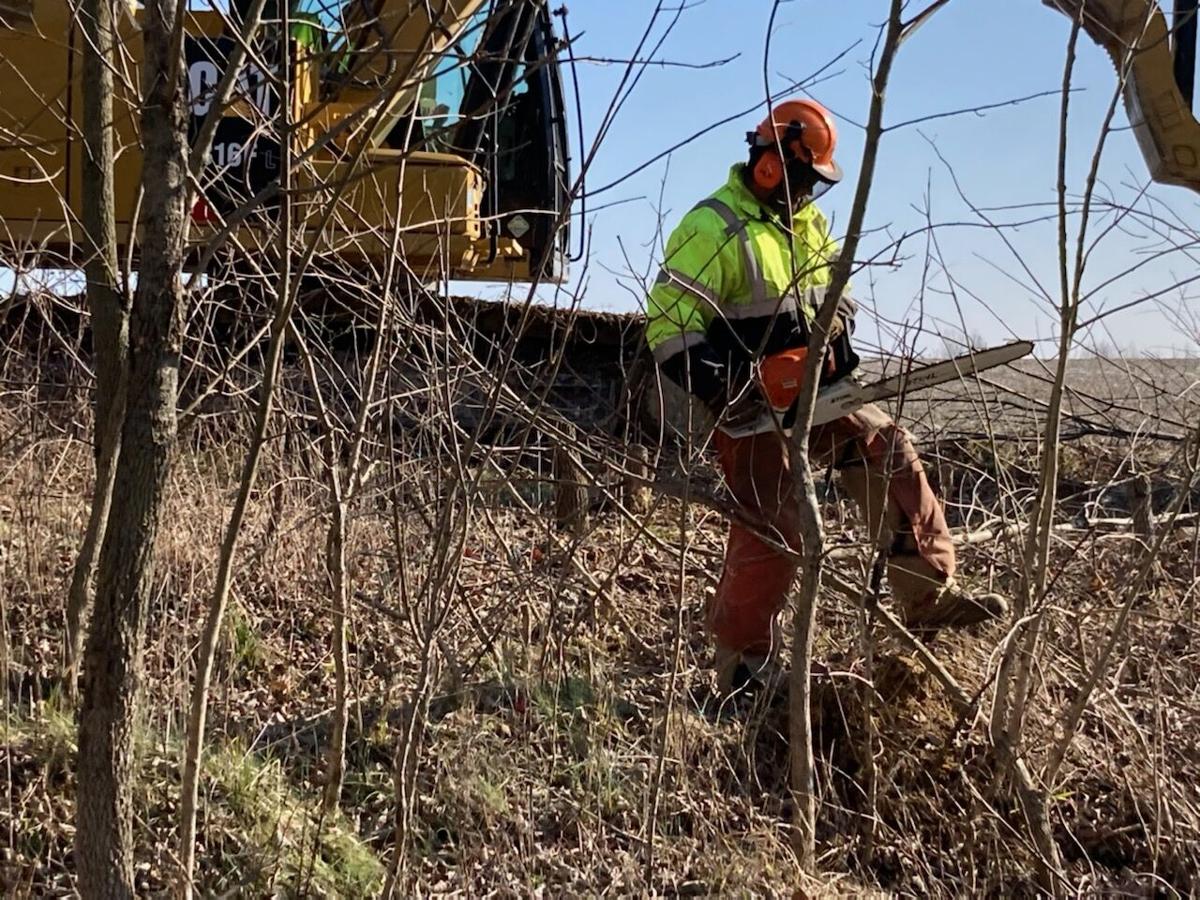 A county highway worker clears trees in preparation for the construction planned on CR 900E this spring.

A county highway worker clears trees in preparation for the construction planned on CR 900E this spring.

The Daviess County Commissioners keep moving forward on two projects along CR 900 E. The commissioners received updates on the planned expansion of CR 900 E. that will begin this spring, and on the application to the state for an additional federal project in 2026 in Odon.

“We hope to get a notice to proceed very soon for the utilities to begin relocating their lines,” said Daviess County Highway Supervisor Phil Cornelius. “I know some of them have already bid the project and are just waiting for the go ahead.”

The utility work will be part of a project that extends from CR 100 N. to CR 450 N. It includes widening CR 900 E. to include a lane for non-motorized traffic, and turn lanes. The county also joined into a contract with the Indiana Department of Transportation on the project that puts the not to exceed cost at $12,832,145.

“We expect to have the contracts for the construction ready in March and the actual work will start around May,” said Cornelius.

In addition, last week officials from Daviess County and the Odon Town Council made their pitch for a federal improvement project from the south city limits in Odon north to just beyond the intersection with SR 58. That project would widen the roadway and eliminate the bottleneck that hits at the Odon town limits. It would also improve the intersection at the highway that would make it more usable by trucks.

“That interview with INDOT went very well,” said Cornelius. “This is all about safety. I think it will score well.”

The project carries a $7 million projected cost and state officials have pointed out that they have received around $380 million in requests but only have $120 million available.

“This is going to be very competitive,” said Cornelius.

The county commissioners are starting the year with a new look. Ron Arnold has taken over the seat formerly held by Tom McCracken. Also, the commissioners shuffled their officers. Michael Taylor takes over as president. Nathan Gabhart moved from president to vice-president and Arnold will be the board secretary.

“I really didn’t have the time, but I decided to go ahead and step up and take it on,” said Taylor. “I am really hoping that after getting the annex completed that we can begin to go back to a little more normal operation.”

Taylor points out that even with annex off the table, the commissioners have plenty facing them.

“Of course, there is still the COVID,” he said. “Also, next week we are going to be looking at a mock-up window for a replacement on the old courthouse. If everything goes right, we should be bidding out new windows and some tuck-pointing work on the courthouse soon.”

The new president of the commissioners says the county will also be cutting back on road construction.

“We have put down a lot of black top the last four years,” said Taylor. “The plan this year is to finish out the projects that were started and then go back and spend time doing maintenance.”

The commissioners also reorganized as a drainage board and a board of finance with Taylor serving as president, Gabhart as vice-president and Arnold as secretary for each board.