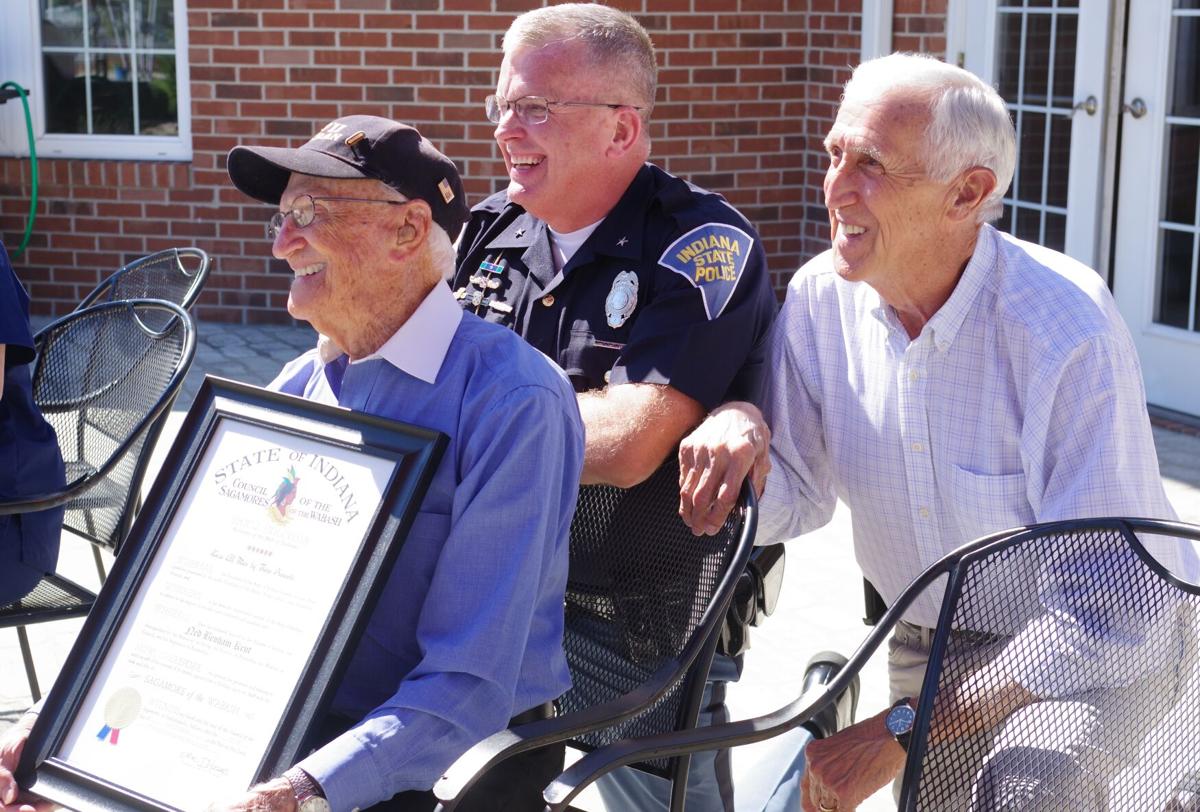 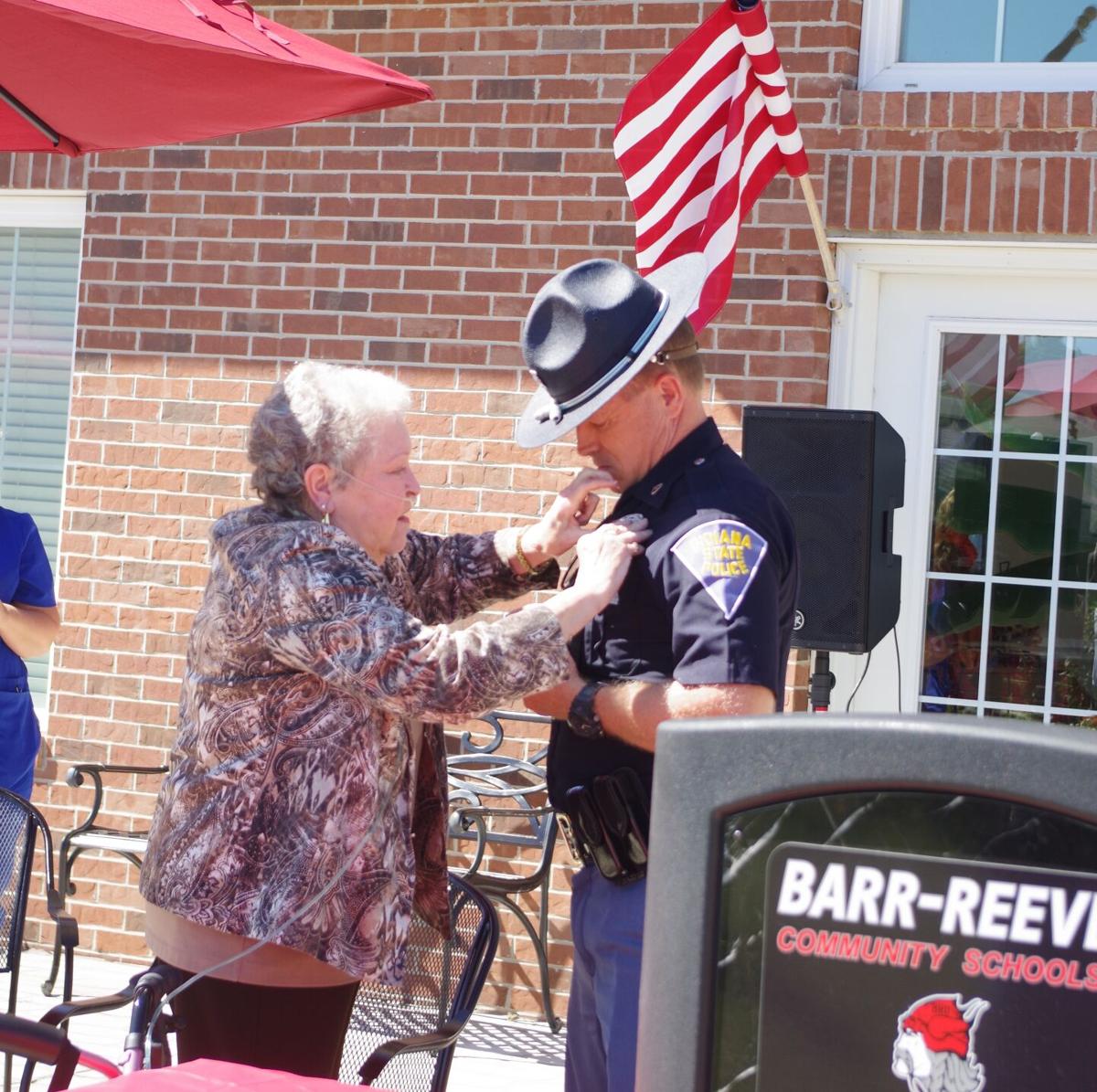 Gaven Wilson with the Indiana State Police receives a new badge from his mother, Vicki Wright. The badge, number 333, is in honor of his grandfather whose POW number was 333.

Gaven Wilson with the Indiana State Police receives a new badge from his mother, Vicki Wright. The badge, number 333, is in honor of his grandfather whose POW number was 333.

Ned B. Kent spent several days this week sprucing up the flowers in the courtyard area of The Legends Village on Troy Road. For nearly the last 11 years, the 104-year-old World War II veteran and florist has tended the flowers faithfully so he thought nothing of it when 52 mums were brought in.

“I thought it was a little overboard,” he said with a laugh. “Then they told me it was because “Singin’ In the Rain,” my favorite musical, was going to be coming to perform.”

Kent went ahead and watered the colorful fall flowers and eventually Libby Robinson and Barbara Helm let him in on the secret. That secret was that Kent would be honored with the Sagamore of the Wabash.

“I’ve known people who’ve received this award,” said Kent after the ceremony. “But I never thought I’d get one. I’m just humbled.”

Presented by Indiana State Police Superintendent Douglas Carter, more than 35 community members and residents attended the ceremony held in the courtyard of the assisted living facility.

“It was just a few years ago I first met Ned at an event down at the Jasper ISP Post,” said Carter.

Kent was there with his friend, retired Indiana State Trooper Gordon Hochmeister. Not long after Hochmeister and Carter decided to do something special to honor Kent.

“I was in awe of Ned,” said Carter, who said Kent’s Sagamore was the second he has had the honor presenting. “Our world is out of balance. I wish the eyes of the world could be on this and be on Ned. We must never forget (what those who served have sacrificed).”

Kent graduated from high school in 1935 and was working as a bookkeeper in Evansville when he received his draft notice in 1941.

“I answered the call and took the train to Indianapolis and went to Fort Benjamin Harrison,” said Kent, who served for five years. “I was stationed there for two years and rose from a private to a master sergeant. Then I was shipped out to North Africa.”

After he returned home, he and his wife, Adelyne, who passed away earlier this year, ran a flower shop in Sandborn.

Always one to stay active, Robinson, who is the activities director at the facility, said Kent is always up for anything.

“He attends every activity I offer. He’s a lot of fun and a lot of times, he wins,” she said. “He’s just an amazing person. Ned loves God, family, faith and friends. It’s a pleasure and an honor to be a small part of his life. We’ve laughed together, cried together and prayed together.”

Barbara Helm said Kent, who is known by nearly everyone as Ned B., takes great pride in all he does.

“Not only does he work in the flowers, he’s also now taking care of some turtles,” she said with a chuckle. “We’ve just really been blessed by him.”

Kent, who also takes care of the plants inside the facility, including a banana tree, said the tiny turtles are just another blessing and it’s his pleasure to tend to them.

“They come on the porch to eat,” he said before explaining how they burrow in the mulch.

Before the ceremony ended, Carter presented Indiana State Trooper Gaven Wilson with a surprise of his own. Wilson’s grandfather was a Prisoner of War during World War II. His POW number was 333 and he was known for sharing stories of his time as a POW. Wilson had inquired if the ISP badge of the same number was available but it wasn’t. After hearing Wilson’s story, Carter had the badge recast for Wilson and on Friday, Wilson’s mother, Vicki Wright, pinned him with the new badge.