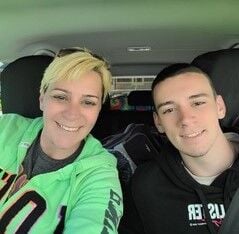 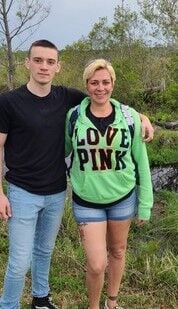 Martin County Ambulance Service Director Tiffany Whaley, of Washington, shouldn’t have been in a Columbus, Ohio-area Pilot Travel Center April 26 — she’s gone over the 100 small decisions that led her there so many times in the last few days — if she hadn’t taken a detour, if she hadn’t stopped in Punxatawny earlier that day, if she hadn’t picked the right bathroom stall, a young woman would be dead.

Whaley was at the end of a vacation with her son visiting her mother in Pennsylvania. She decided at the last minute she wanted to see the famous Punxatawny Phil and give him a piece of her mind about the erratic weather — something her 17-year old son Stephen was less than enthusiastic about.

After the side trip it was later than she wanted, and she was ready to be home, so when the GPS told her an accident was ahead, and a country detour would save her 15 minutes, she took the chance.

“I never do that because don’t like getting off on country roads,” she said. “But it had been a heck of a two weeks and I was tired.”

Down the road the duo pulled into a Pilot Travel Center for a pit stop and a fill up.

In the bathroom, Whaley heard a sound.

“It’s allergy season, and then there’s COVID,” she said. “I didn’t think much of it. Then it happened again and I said, ‘no, I know this noise.’”

The noise was agonal breathing.

With 19 years as a first responder and certification to teach CPR, Whaley sprang into action, first identifying herself and telling the clerks to call 911, throwing her purse to her son on the way back to the bathroom, asking for gloves and an AED.

Her son went through the attached Arbys, and, without permission, grabbed gloves from the cook area.

Meanwhile she and two Pilot employees, struggled to bring the unconscious woman, now not breathing, out of the locked stall.

Finally the woman was on the floor, and Whaley, connected by cell on speakerphone with dispatch, described the woman’s state as she administered CPR, and, seeing a needle in the arm, told dispatch they would need Narcan.

A man walked into the bathroom, screamed expletives at the unconscious woman, then grabbed the needle from her arm and left the property completely.

The women who worked at Pilot identified the woman as a former employee, and said the man was her boyfriend.

The Pilot had no AED, but the woman’s pulse was coming back, and when she started breathing they rolled her to her side.

Local paramedics walked in with Narcan, which they administered.

“Welcome back,” Whaley said when the woman woke.

Whaley gave her report to local officials and then continued home with her son. It was the first time he’d seen her use her training, though she’s taught all her children CPR.

“I was tired when pulled in, but I was not tired after. It was the adrenaline.”

She said she loves that her career has offered her something new every day, and adds the satisfaction of helping gets in a person’s blood, but rarely does she get to know the outcome of helping someone because the first responders normally transport their patients to hospital care.

“Once in a blue moon they come by station and you know,” she said. In this case she feels divine intervention brought her to a specific person at a specific time to offer a second chance.

“I hope she gets the help she needs,” she said.

Whaley also contacted corporate Pilot, and asked them to install an AED, even offering free training for their employees when they have their unit.