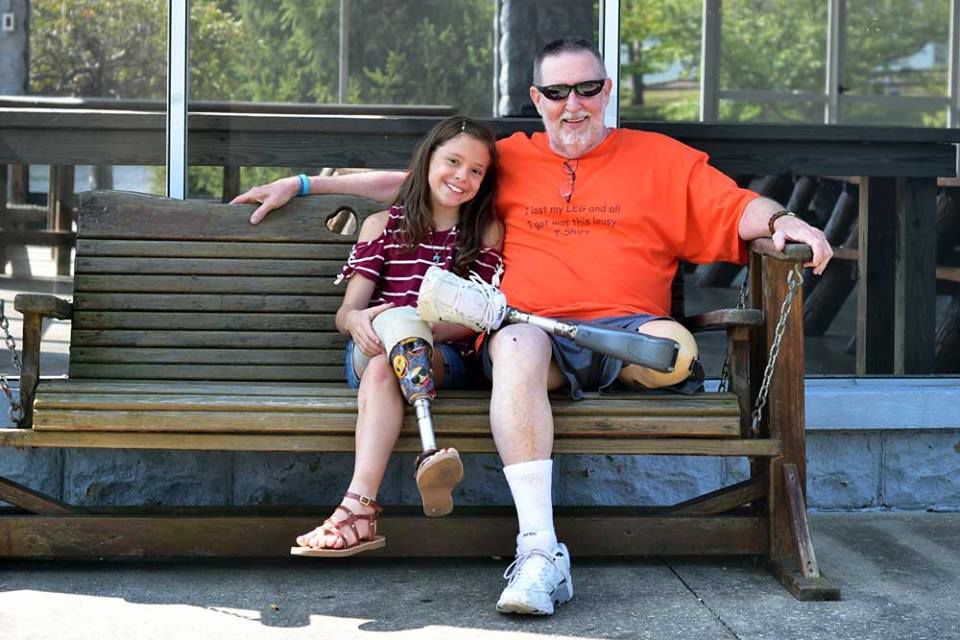 Ayden Wagler and Ron Bratton take a break from a walk. The unlikely friends have bonded on something that makes them stand out from many others in the community — their prosthetic legs. 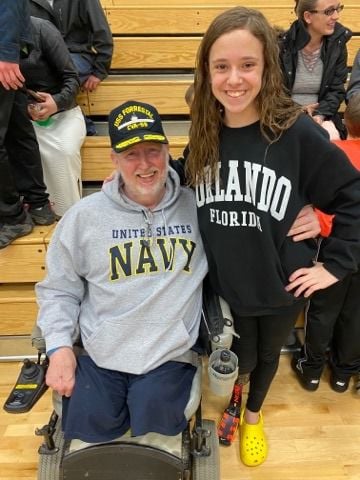 Ayden Wagler and Ron Bratton take a break from a walk. The unlikely friends have bonded on something that makes them stand out from many others in the community — their prosthetic legs.

One might not think 12-year-old Ayden Wagler and 63-year-old Ron Bratton have much in common but they do. They love to smile, tell jokes and make people laugh. They are also both amputees.

Wagler, a spunky sixth grader at North Daviess Elementary, was diagnosed with neurofibromatosis and pseudoarthosis of the tibia when she was just 8 months old. By 10 months, her leg had broken while in a brace and by the time she was 3, the decision was made to amputate her leg.

“There was no surgery to fix guarantee fixing it,” said Ayden’s mother, Angie Wagler. “So for her quality of life, we chose to amputate as opposed to always worrying her leg would break and treating her like a fragile egg.”

Fragile egg does not describe Wagler, who loves to play sports, at all. In fact, she’s pretty fierce and earlier this month participated in the final Samantha Porter Running With An Angel 1-mile fun run at North Daviess.

The always smiling Ayden was just over 100 days removed from her last surgery.

She also just wrapped up a stint as a Riley Children’s Hospital Ambassador.

“Some of the events I was supposed to speak at were canceled but it was a lot of fun,” said Ayden Wagler, who has also inspired Bratton to get involved in supporting Riley Children’s Hospital. “I got to meet a lot of different people too.”

It’s that charisma and charm that serves as some inspiration for Bratton.

“Ayden is a big inspiration to me,” said Bratton, who has had both his legs removed after some health complications. “And she’s been giving orders since I first met her.”

The duo first met at an Odon Christian Church function, before Bratton, who is known for his work with Fields of Faith and Fellowship of Christian Athletes, had his other leg amputated. They immediately clicked.

“She told me I needed to wear my prosthetic,” said Bratton, with a laugh.

Wagler has a sweet side too.

“Before my last surgery she gave me a handmade card,” said Bratton recalling after surgery, he was a bit down. “Then I just thought about what Ayden would do.”

While it’s what makes Bratton and Wagler different from most that brought them together, they are both quick to point out they are just like everyone else.

“It doesn’t bother me. I like to do the same things everyone else likes,” said Wagler, who said she has become accustomed to people asking questions about her often colorful prosthetic. “

With restrictions on gatherings in place due to COVID-19, the two won’t be able to get together as much.

“We like to go to ball games and just visit,” said Bratton.

Since that’s not option, the two plan to stay in touch via phone and social media.

Curtis A. Branam passed away unexpectedly on Monday, April 6, 2020, at home in Bloomington in his sleep. Curt was born to Richard (Dick) and Anna Mae (Bingham) Branam, who preceded him in death. He was a graduate of Washington High School and Indiana State University. He retired from G.E. an…

Donna Saravia, 50, passed away at 12:49 p.m. April 6, 2020, at Hillside Manor Nursing Home. Donna was born Aug. 25, 1969, in Indianapolis, Indiana, the daughter of Q.T. and Wanda (Koker) Franklin. Donna enjoyed scrapbooking and loved her flowers. She also enjoyed her time doing arts and craf…

Freeda (Cox) Smith, 84, passed from this life at her home in Indianapolis on April 6, 2020, surrounded by her family. She was born in Alfordsville. Burial will be in Old Union Cemetery.