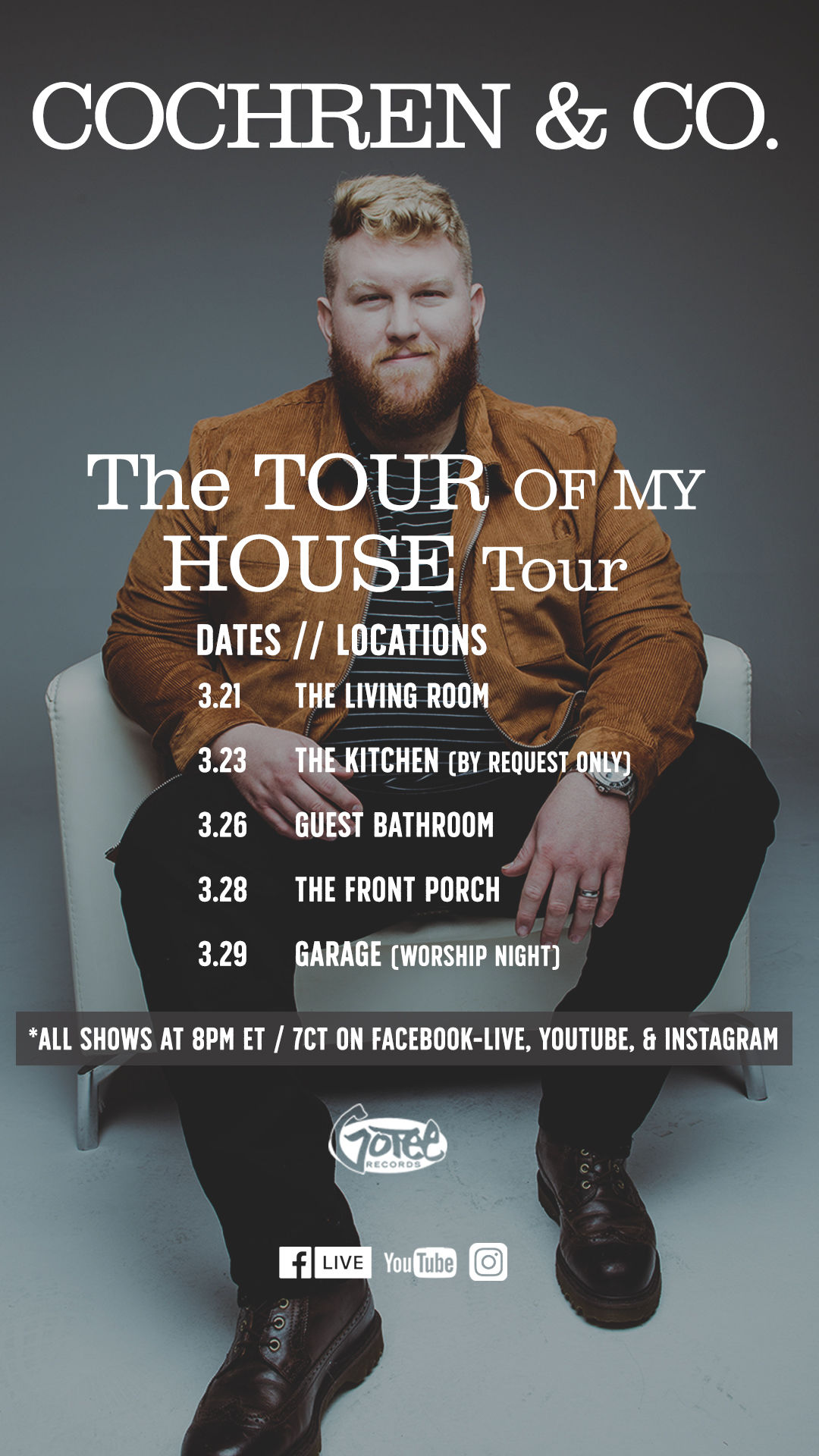 Local singer/songwriter Michael Cochren was supposed to be on tour with TobyMac right now but due to COVID-19 restrictions, he’s entertaining fans from a different location — his Montgomery home. 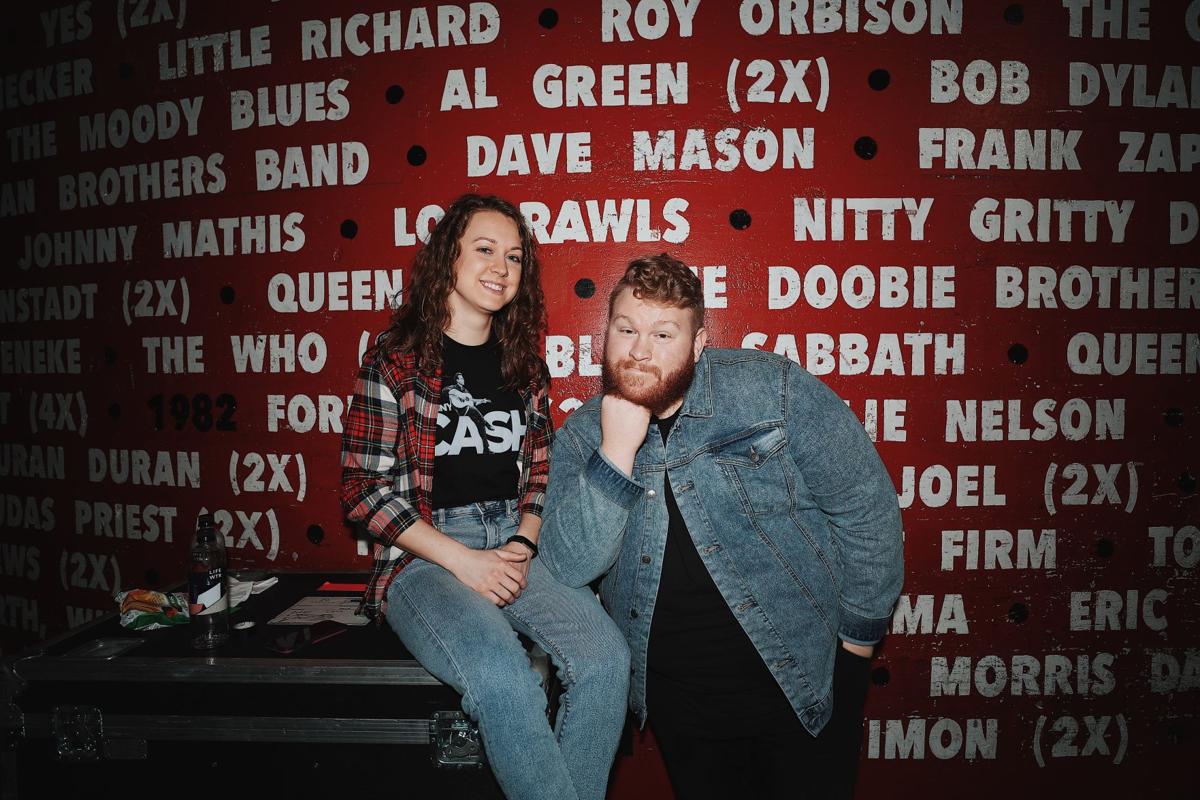 Leah and Michael Cochren are shown backstage at the legendary Forum in Los Angeles during the Hits Deep Tour in this photo taken by Diego Brown.

Local singer/songwriter Michael Cochren was supposed to be on tour with TobyMac right now but due to COVID-19 restrictions, he’s entertaining fans from a different location — his Montgomery home.

Leah and Michael Cochren are shown backstage at the legendary Forum in Los Angeles during the Hits Deep Tour in this photo taken by Diego Brown.

MONTGOMERY — If you are not doing anything later, Michael Cochren is having about 1,000 people at his house and you are invited.

Cochren, a 27-year-old Christian music singer/songwriter, is having concerts from his Montgomery home. While not a traditional concert and no one is attending live, the concerts are available on Facebook, YouTube and Instagram.

The Tour of My House has three remaining dates: Thursday, Saturday and Sunday. All performances begin at 8 p.m. Thursday’s site will be the guest bath while Saturday’s performance is scheduled for the front porch (weather permitting) while Sunday’s show site is the garage.

A far cry from the arenas he had been filling, his house will have to do until COVID-19 restrictions are lifted and he can return to touring the country with fellow musician and legendary performer, TobyMac, who has sold more than 10 million records as a Christian hip-hop artist and has won seven Grammy awards.

Cochren was living his dream of performing to sell-out crowds when the seven-artist tour was shut down due to the virus outbreak.

“We (tour performers) were really conflicted when we learned the tour had to be postponed,“ Cochren said. “We wanted to do the right thing, but it was really, really tough to walk away from a tour schedule where we were performing to sold-out sites.”

The tour, arguably, was the biggest of his career and it brought to fruition the dream he had long before he graduated from Pike Central High School in 2010 —to be on stage before thousands of people and sing an original top 10 song. In this case the top 10 song, “Church,” a Cochren original, peaked at number nine on the Christian music charts.

Not only was the tour the highlight of his performing career, it was an opportunity for he and Leah, his wife, to be together and perform together. Leah, who teaches music at Barr-Reeve Elementary and also leads the middle and high school choirs, sings and plays back-up guitar for Michael, was with the tour for five weeks before she had to return to her teaching job.

Leah and Michael loved the life on the road. Their love for music actually is what brought the two together.

Leah was a warm-up act at an Oakland City University (OCU) concert event that featured Michael. Michael is an OCU graduate with a Bachelor’s degree in general studies as he was looking for the degree that would allow him to graduate in the shortest amount of time possible after he had attended Vincennes University, where he studied audio engineering. It was an effort to give himself studio time. He also attended University of Southern Indiana for public relations. She set up and was practicing when Michael heard her sing. Sight unseen Michael leaned to his drummer and said jokingly, “I’m going to marry that girl.”

“That girl,” now his wife, has not missed a beat of his ever-so-gradual chart climbing career. They seem to be in lock-step and both celebrate the new-found success.

“We were driving to Evansville to go shopping when the song came on the radio the first time,” he recalled. “It was just an incredible moment; we were crying and being so very thankful…it was just incredible.”

Incredible may be the perfect word to describe that moment as he listened to the song on the car radio he knew his 10-year journey of trying to break through barriers had nothing to do with his plan; rather, he knew it was God’s plan.

Michael had a plan all along; from 2010 on he was serious about a career as a songwriter and performer. His mother, Kelly, arranged for piano lesson when Michael was eight years old. He didn’t optimize the opportunities and his piano teachers told Kelly the lessons were a waste of her money and the lessons were an even bigger waste of their time. Although music was his calling, he didn’t become serious about it until he was about 13. Once he made up his mind he was hell-bent on making his own way in Nashville, Tennessee.

He dedicated himself through his senior year in high school to positioning himself to be a success in Nashville.

“Every day was a grind,” he recalled. “But I had no luck opening doors in Nashville.”

In 2012, he worked at a Newburgh church even though he still harbored dreams of the big stage. One year later he became the worship director at Washington’s Antioch Christian Church. He still retains that position.

As worship director he tended to the job and wrote songs exclusively for the church; the church allowed him the flexibility of touring with Christian bands.

“It wasn’t until I stopped fighting so hard to do it my way that the doors opened for me,” Michael said.

According to Cochren, TobyMac made a special appearance at a recording studio where he knew Cochren was recording.

“TobyMac came in wearing a fedora and he said to me, ‘I know you are being courted by other labels and I’d like to throw my hat in the ring,” he said. “And TobyMac literally threw his hat on the table.”

Cochren said he and his wife prayed about the contract-signing decision and took about a month to decide; they haven’t looked back since he signed papers.

“We signed a contract in September 2018, were in the studio in October and touring in January 2019,” he said. “It was a whirlwind”.

The whirlwind lost a bit of its velocity when the COVID 19 spread widened.

All on the tour felt the disappointment but all accepted the fate; each returned home.

And, while at home, one of TobyMac’s producers suggested to Cochren that he should have his own tour, albeit from his house.

“The idea was to promote it like any other tour and I thought it was a great idea,” he said.

Promotional material was prepared and the idea launched.

His first stop was the Living Room, followed by a stop in the kitchen.

Even though he is in the comfort of his own 1,800-square feet home, he still has butterflies before he goes on stage.

“It is weird, but it doesn’t bother me one bit to be in front of 10,000 people in an arena, but it is nerve-wracking to perform in front of a camera in my house,” he said.

Stage fright or not, he intends to finish his House Tour on schedule. He says he wants to perform and he wants to keep the message out there to his fans. He is drawing 1,000 viewers for each of his concerts, and even that number is a surprise to him.

“I wasn’t sure what to expect but, that number is higher than I expected,” he said. The attention is humbling to him and he recognizes there is a sizable difference between “local” celebrity and national celebrity.

“I think people in the area know me for reasons other than my music; some know me from the Christian music and that makes me feel good, but no matter what, I know that I am the same goober I have always been,” he said.

That goober has entertained ideas beyond his House Tour as he would like to conduct more online concerts while people are hunkered down until it is safe for people to congregate.