Melody Brunson | Times HeraldCoal is processed and loaded on trucks for transport at the Antioch Mine, northeast of Washington. 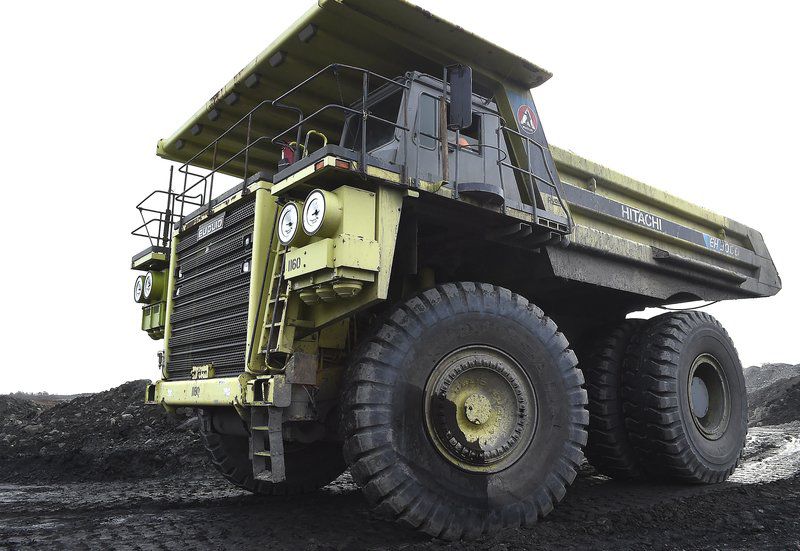 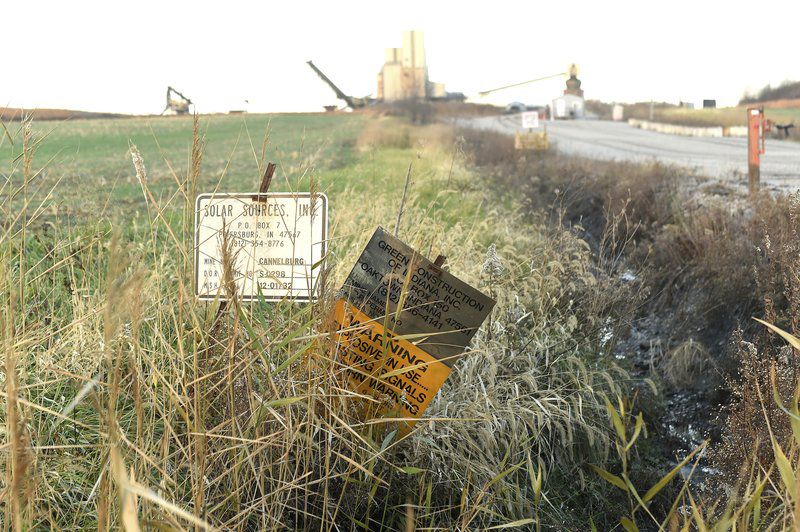 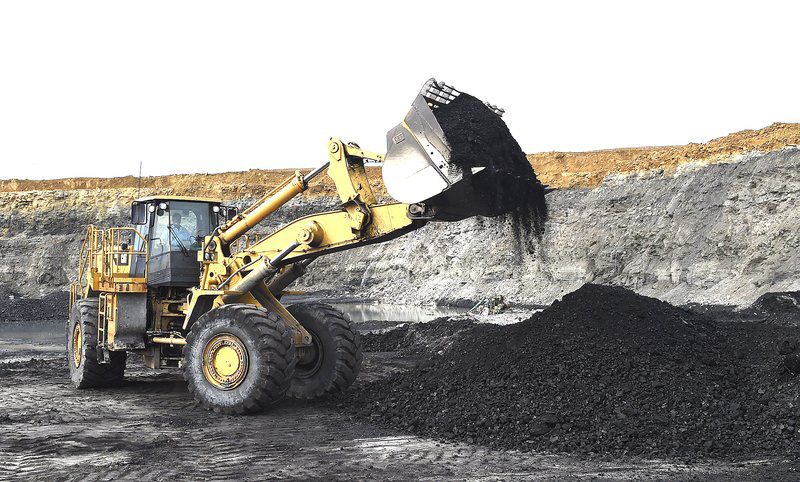 Melody Brunson | Times HeraldRick Kempf gets ready to load coal on a truck at the Antioch Mine northeast of Washington. 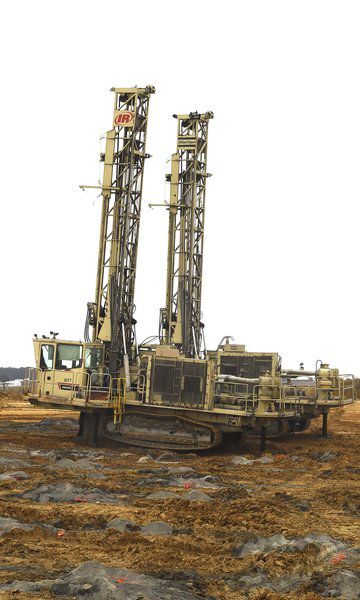 Melody Brunson | Times HeraldMultiple holes are drilled at the Antioch Mine and loaded with explosives at Antioch Mine, northeast of Washington.

Melody Brunson | Times HeraldCoal is processed and loaded on trucks for transport at the Antioch Mine, northeast of Washington.

Melody Brunson | Times HeraldRick Kempf gets ready to load coal on a truck at the Antioch Mine northeast of Washington.

Melody Brunson | Times HeraldMultiple holes are drilled at the Antioch Mine and loaded with explosives at Antioch Mine, northeast of Washington.

The rumblings within the coal industry in southern Indiana might not be from the blasting in nearby mining operations. There are whispers about once closed mine pits re-opening. And, there are innuendos that coal companies are becoming liquid and getting ready to pour money into operations and put miners back to work again.

After a couple of very lean years, that have been blamed on regulation, it could be "old King Coal" is ready to become a major player in the economy of Daviess County and other nearby counties.

"There is optimism and hope for the future," said President of the Indiana Coal Council Bruce Stevens. "At least we feel now like we won't be regulated out of business. The part of the industry that is still here is looking at future reserves and there is an optimism about the future of the coal industry."

Much of the optimism came with the election of Donald Trump. During the Obama Administration the coal industry has contended it was put at a competitive disadvantage and regulated almost out of business. A battle over the Clean Power Plan being pushed by the Environmental Protection Agency wound up in court and could well come to a close.

"The Clean Power Plan was the number one threat to the coal industry in Indiana," said Stevens. "It called for a 39 percent reduction in carbon dioxide emissions. That would have meant big cuts to the coal industry in Indiana. We had a very uncertain future. The case is still in the federal courts. The Trump administration has indicated it won't defend it. We hope there will be congressional action to vacate it once and for all."

Currently there is one active mine, the Antioch Mine, in eastern Daviess County owned and operated by Solar Sources. Earlier this month the company asked county commissioners to close some roads so that the mine could continue to expand. There is one mine, which is actually a combination of several smaller mines in southeastern Daviess County that is being closed down. In addition, another potential new coal mine in the Glendale area has been on hold for a couple of years.

Officials with Solar Sources say that even with the low prices for coal they were able to keep operating.

"Our customers honored our contracts," said Michael Owen, manager of regulatory affairs for Solar Sources. "We are hoping for higher prices and better days ahead. The spot market for coal is up and that is encouraging."

In Daviess County, neighbors to some mines are noticing some changes. Galen Graber's family owned some of the land that became the Antioch Mine.

"Over the years the mines have had a tremendous impact on the area," said Graber. "Besides the jobs for miners, there are all of the spin-off jobs, the shops, the fuel business, companies like MacAllisters. They have a huge impact on the jobs and the assessed value that creates the tax base. When the mines began to close our assessed value went down," Graber, a longtime Barr-Reeve school board member, said.

Since the presidential election, Graber says he has noticed some not so subtle differences in the area near the coal mines.

"The activity has tripled," he said. "There are trucks running back to the old Billings Pit and they are pumping it out. I hear they may re-open it after the first of the year."

"We are making preparations to reactivate that mine," said Owen. "We picked up a new contract and hope to have it open after the first of the year."

Solar Sources operates both the Antioch Mine and Shamrock Mine near Ireland in Dubois County. The company produces around 2.5 million tons of coal annually. When the Billings Pit reopens the amount will increase to near 3 million tons.

"In the last four or five years we have consolidated our operations," said Owen. "We had fewer mines with higher capacity to maintain our production."

The mine near Glendale was originally sought by Vigo Coal, but the company did not open the mine when the market went soft.

"We hold some mineral rights in that area," said Graber. "The suppressed coal market held up the opening. I have heard that the former owner of Black Beauty now has purchased the mine. We are still waiting to hear from him."

Many in the business believe that wait may be shorter now that there are going to be new hands at the controls for EPA.

"We really needed regulatory relief," said Stevens. "There have been regulations coming fast and furious against coal mining and usage. We couldn't have gone another four years with those regulations."

"Hopeful is an understatement," added Owens. "I think the Trump administration will help end or at least relax some of the activities the feds have been involved in concerning coal. I have never seen an environmental law repealed. I just want them to quit moving the goal post. This industry will work in an efficient manner to meet the goals, but we have to have something that we can aim at."

While coal has been struggling, other "clean" energy sources have been flourishing in Indiana. Windmill farms fill Benton and Tipton Counties in northern Indiana. Solar farms have popped up even in coal country. The Indiana Municipal Power Authority opened one earlier this year on the edge of Washington. Duke Energy is working with the U.S. Navy to produce solar power on the Crane Naval Base, and Hoosier Energy has constructed a solar farm in Greene County just off of I-69.

"We (the Indiana coal industry) just want the opportunity to compete," said Stevens. "There are incentives out there for other fuels that can't provide the large amounts of affordable energy like coal can. We are really hopeful that regulatory relief doesn't turn into an effort to make natural gas more competitive than coal."

Natural gas has had a big impact on energy markets. Large finds using new technology have driven down the price and in many areas made it a cheaper source for generating electricity than coal. However, as Stevens points out, Indiana does not have the natural gas production or reserves to compete with coal in an unregulated market.

"Forcing Indiana power plants to switch to natural gas is not good for Indiana," said Stevens. "Indiana is not in a position to produce big amounts of natural gas even though gas is cheaper now than it was five years ago. By the time you add in pipeline costs, coal is more affordable in Indiana. In addition, the price is much less volatile."

Even though the coal industry has been rallying under the phrase "Stop the War on Coal," the shrinking coal business has also been impacted by the business's biggest long-time nemesis, the weather.

"In 2015, we had a mild winter and summer," said Stevens. "A lot of the coal that was purchased for that year was not used. In 2016, we have had more typical year. The excess has been utilized. Multiple mines were idled and we are hopeful that some of them will start up again."

The difference now is that the markets are trending in a different direction.

"Prices have increased," said Stevens. "Production is up. It has steadily increased for the last five months. We are closing the gap. We believe we will get over 30 million tons next year."

For Daviess County's only active coal operation, 2017 looks like it will result in fairly steady production.

"We have what we need for now, but in this business sometime things change very quickly," said Owen. "We are hopeful that some new markets will open for us. There were a lot of long-wall underground mines shut down in Illinois. Some of the existing power plants may be re-thinking their suppliers in the future and we are anticipating some changes that might open up other possibilities under the new administration. We are even looking at some overseas markets."

That growth in usage and production of Indiana coal is something that can ripple through communities in Daviess and surrounding counties.

Some impacts though are less than huge and more individual. Greg Chaney lives in the Montgomery area and has been a miner for 36 years.

"Things are looking up," he said. "The work has begun to pick up over the last couple of years."

If the coal business should kick up beyond the mines now in the area, officials project the days of the surface mine may be numbered.

"The U.S. Geological Survey says there is enough coal in Indiana to provide energy for 500 years," said Stevens. "It can all be recovered using current underground mining practices."

Perhaps another kink in the recovery of "King Coal" could be the power plants. Some of the older plants like the Hoosier Energy Plant in Pike County have been shut down rather than continue because it would be too expensive to get them to a point where they can meet modern emission standards.

"Those plants are gone and they are gone forever," said Stevens. "They will not be reopening or operating in the future."

"I know a lot of people frown on coal as dirty," said Graber. "There's been a lot of money spent on scrubbers like in Petersburg (at the IPL Plant). I hope they get to use them and use our resources and get people back to work."