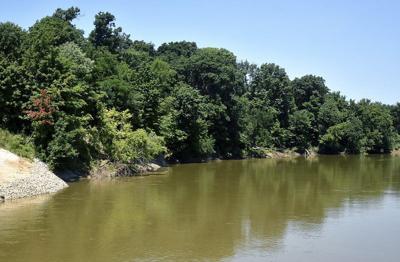 Fish and Wildlife officials are asking the public to be on the lookout for yet another invasive species of carp that appears to be headed for Indiana. The black carp is taking the same route that other invasive species have out of the ponds of the southern United States up the Mississippi, the Ohio and into the smaller rivers of the Midwest.

“We have had grass carp, silver carp and big head carp for quite awhile,” said Eric Fisher, Aquatic Invasive Species Coordinator for the Indiana Fish and Wildlife Service. “The black carp is the last coming up the Mississippi, and it is the one with the most unknowns.”

All of the Asian carp species have threatened the native fish in Indiana. Where the first ones to come into Indiana fed mostly on plankton the black carp appears to have a different favorite meal — mussels. “They appear to feed heavily on mussels and snails,” said Fisher. “We don’t know if that is their only preference. What we do know is that the native mussels have had enough problems with dams and pollution, and they don’t need another thing working against them.”

At one time Indiana’s rivers teemed with mussels. At one time there was a pearl rush to the Vincennes area because of the fresh water pearls there. Mussel harvesting continued for years before it was finally outlawed. Now the mussel population is way down.

“Mussels have been in decline for years,” said Fisher. “A fish that could eat large numbers of them are a concern.”

Officials say the black carp are similar to the other types of Asian carp in the way they spread to other areas and that they tend to reproduce rapidly.

The black carp have been tracked into Illinois and along the Ohio to within 10 miles of Indiana. “We expect the first one to show up near the Ohio and Wabash sometime soon,” said Fisher.

Illinois is already dealing with the new invaders. The Illinois Department of Natural Resources, Southern Illinois University and the U.S. Geological Survey have landed a federal grant. With it they are offering an incentive for fishermen who catch the fish to bring them in for study.

“This will give us a better analysis,” said Fisher. “We really don’t know where in the United States these fish originate from. We do not have enough specifics to determine where they are coming from.”

If they do make it into Indiana the fish are expected to impact mussel populations along the White, Eel and Little Blue Rivers. “We need to try and stop them, and it is really hard to control their spread when they get into open water like the Ohio,” said Fisher.

While mussels may be their favorite food, there may be other foods for the black carp that could put them into direct competition with native fish species. What travel officials in Indiana have learned is that anything that impacts fishing is bad for the area economy.

“Fishing has a big impact on our area,” said Jameson Hibbs, executive director for the West Boggs Lake Park. “When our lake went down three years ago for renovation it really hurt, not just our camping but businesses in the area. Our camping revenue has jumped in the last three years and a large percentage of that is fishing.”

Officials point out that it isn’t just local people looking to hook a big one. “Most of the people who camp at Boggs and at Glendale are from out of the area,” said Hibbs. “They are bringing a lot of dollars into the area. In the last two years we have issued a record number of boating passes. Our camping revenue at Boggs has jumped the last two years. Glendale, which is open exclusively for hunting and fishing, has a full campground in the spring and the fall.”

Fishing in Daviess County is not relegated to the lakes. “There is a lot of fishing being done along the White River too,” said Hibbs.

All of those lines in the water are something officials hope can provide some warnings and clues if and when the black carp do come to the area. “People need to be aware of these invasive species,” said Fisher. “By keeping a close track on what they catch they can be extra eyes and ears as we try and deal with this new threat.”

Michael Joseph Palmer passed away at his home in Lawrenceville, Georgia, on July 4, 2020, at the age of 69. Mike was born Dec. 6, 1950, in Washington, Indiana, to Thomas and Ernestine Palmer and graduated from Washington Catholic High School in 1969. Mike earned an AS degree from Vincennes U…