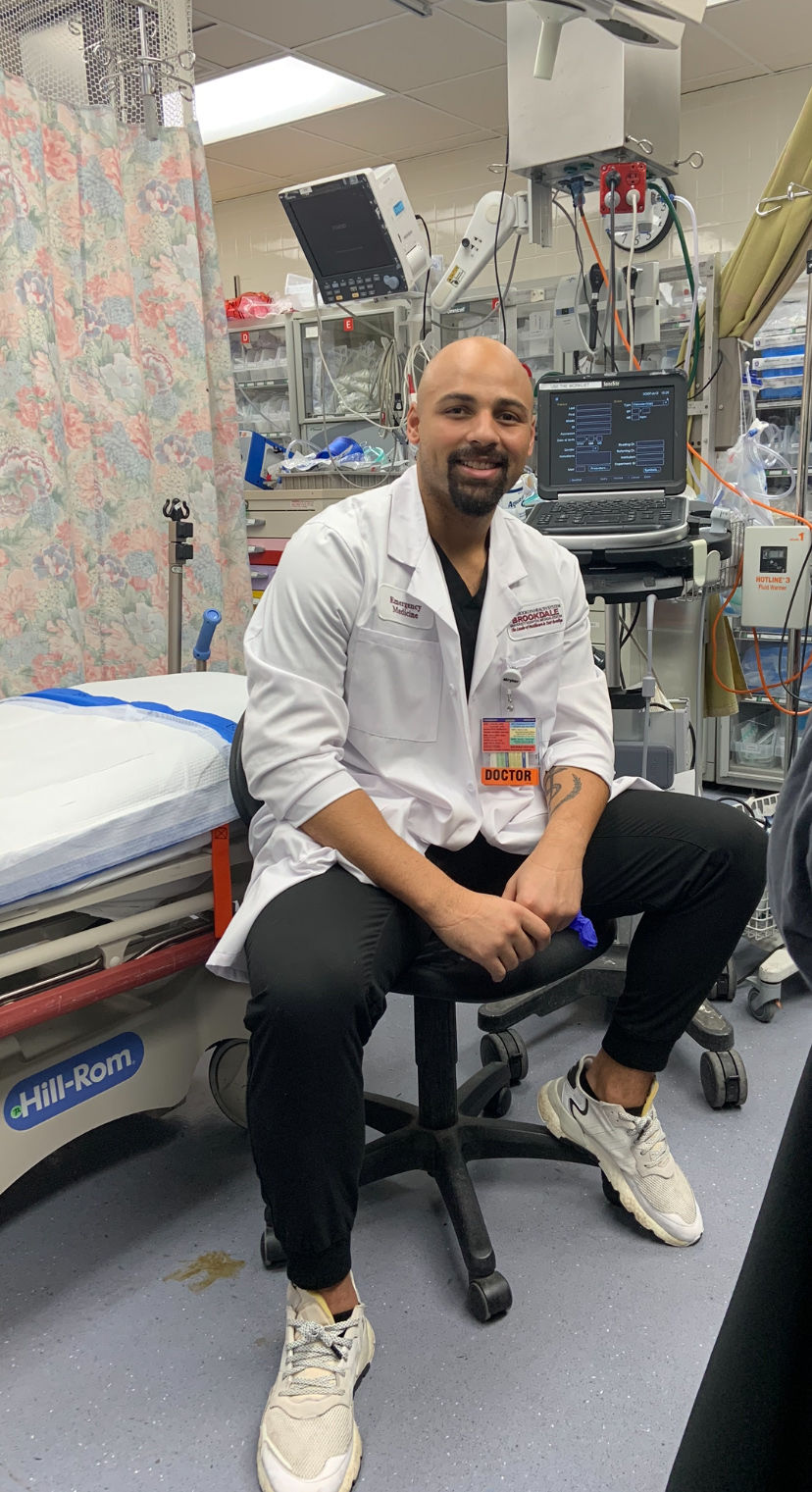 Dr. Ben Obaseki at Brookdale University Hospital and Medical Center in Brooklyn, New York, where he is a second-year resident. 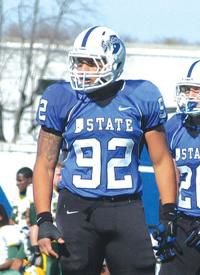 Above: Ben Obaseki as an award-winning defensive lineman at ISU in the fall of 2013. Obaseki is now tackling the COVID-19 outbreak as an emergency medicine resident in Brooklyn.

Dr. Ben Obaseki at Brookdale University Hospital and Medical Center in Brooklyn, New York, where he is a second-year resident.

Above: Ben Obaseki as an award-winning defensive lineman at ISU in the fall of 2013. Obaseki is now tackling the COVID-19 outbreak as an emergency medicine resident in Brooklyn.

Obaseki, a Washington High School grad and a former football standout at both WHS and Indiana State University, who is currently in his second year of a three-year residency at Brookdale’s Medical Center in East Brooklyn, and has recently been elected by his peers and faculty to be chief resident of his program’s 2021 class.

Brookdale has been one of the hardest hit with 300 deaths and Obaseki has been witness to much of the chaos the pandemic has created. Simply put, he said that as space is created in the ER, it is filled up with new patients.

“I would say 300 is not an exact number, but the sad thing is we also have a lot of patients who are right on the cusp (of passing away). Trauma bays designed for two or three people are now holding five to seven. We were considered an under-served hospital before the outbreak, meaning we had fewer resources available to serve this community, so this has really stretched us,” Obaseki said. “It has really had us scrambling. Whenever we go outside, the ambulances are just lined up.”

People have heard about the shortages of personal protection gear and ventilators, however, Obaseki says that there is another fundamental supply that is in jeopardy — oxygen tanks.

“We are running out of oxygen tanks. So many of those suffering from COVID-19 are suffering from hypoxemia (low oxygen in the blood), so even if you have ventilators, you also have to have the oxygen tanks,” he added. “As so, as someone comes off a ventilator, someone else is ready to go on. As soon as someone leaves the ER, someone is ready to come in. The problem with those on ventilators is that, that if you are put on one, there is still only a 20% survival rate. Although we haven’t seen it here yet, other countries are starting to see people who have been intubated are now starting to develop a secondary infection that can be just as deadly.”

Obaseki, the son of Art and Linda Obaseki of Washington, has been on the front line in Brooklyn where he basically just works and sleeps, with walking his dog as his only recreational activity. He said there are still a lot of people not taking this seriously and a large percentage of them are young people.

“I still see people gathering or playing basketball. You have to understand, there are a lot of people who are asymptomatic. These are people who need to understand that it is not about them, or them being sick, it’s about the people they are getting sick by not following CDC guidelines,” he said.

Obaseki cited a model from the Gates Foundation, where it is expected that although New York is the focus right now with the most cases and deaths, they are expected to only have 16 percent of the total deaths, meaning the virus is still expected to sweep across the country and wreak havoc on other places as well. He said there is still a lot of bad information out there, but he said the most important thing every American can do, whether they are in Washington, Indiana, or Brooklyn, is to follow the CDC guidelines.

“I can’t stress this enough; you need to be constantly washing hands, keeping your hands away from your face. You need to err on the side of caution, while preparing for the worst and hoping for the best,” he added. “From some of the models I’ve seen, we could be dealing with this through July.”

Ben’s father, Art, is a retired nurse practitioner and his mother, Linda, also worked in the family clinic. Linda said that they still worry about Ben as he is constantly exposed to the virus and because of the shortages that his hospital is dealing with.

“It is hard because you just don’t know how long this is going to last or what is going to happen,” said Linda. “We are trying to keep his spirits up and we have a family Zoom meeting (video conference set up) on Sunday and have been texting, but it is still hard as a parent. I made him some masks and sent him some cookies. He hopes to get home by August so we can see him for his birthday.”

Obaseki, who was considered one of the best defensive linemen in the nation during his time at Indiana State, and eventually was invited to the Green Bay Packers camp, knows that the most important uniform he will ever put on is a pair of surgical scrubs and an N95 mask. Although he is considering coming back to Indiana after graduating residency, he still knows now that he is in the right place at the right time.

“The last thing I want to see is this hit my hometown like it has hit New York, but the only way to minimize the effect is to take it 100% seriously,” he said.

A GoFundme page where people can show their support if they so wish has been created. It can be found on GoFundMe at “Help Support Our Frontline Hero’s- Brooklyn, NY”. All donations will go directly to fighting COVID-19 with proper personal protective equipment for staff and miscellaneous items for the emergency department.