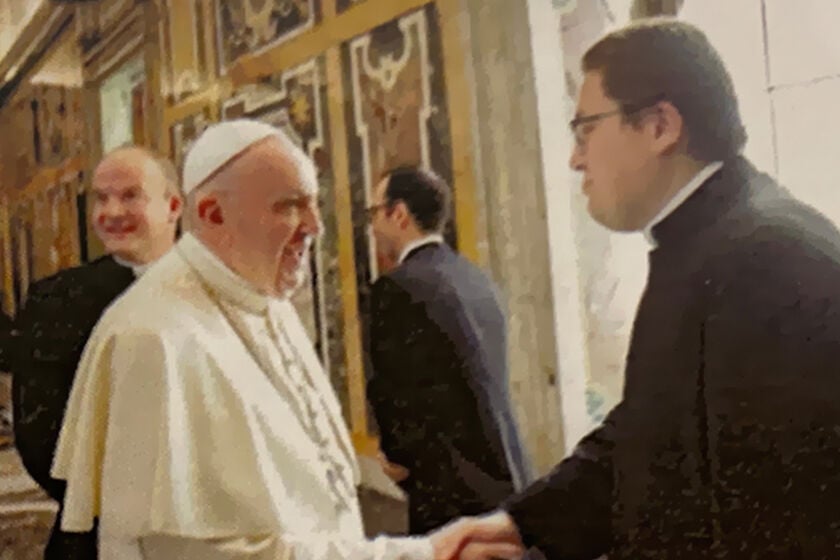 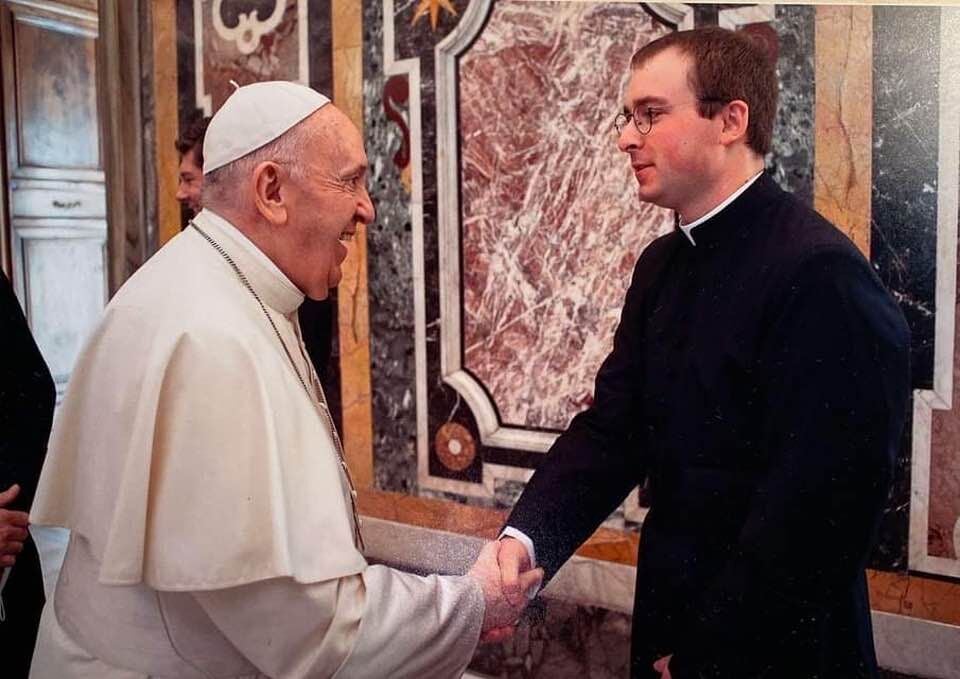 A pair of young men from Daviess County find themselves in the middle of Rome studying to become priests and recently had a chance to meet Pope Francis. Having two people from even heavily populated areas stepping up for the priesthood is unusual. And while Daviess County has produced both priests and nuns in the past, having two in Rome at once is pretty unique and having two who’ve met the pope is even more special.

Keith Hart from Cannelburg and Tyler Underhill from Washington are both at the Pontifical North American College in Rome and met Pope Francis last month.

“It was actually a surprise in some sense,” said Underhill. “Usually he does not meet in person with the new seminarians, but for some reason he decided to this year. We did not know what to expect with all the COVID-19 precautions, but after arriving at the papal residence, we found out that the pope would greet the first-year class in a room and come around to each of us individually.”

Underhill said Pop Francis welcomed the group to Rome and told them to study hard and stay in shape.

“He said exercise helps the mind. When it was my turn to greet the Holy Father, I simply said my name and where I was from. He responded with a smile and said “Si Si,” or “yes” in Italian. After greeting all of us, we took a group photo and he gave us his blessing. The only thing he said to us in English was “Pray for me, this is not an easy job!”’

“Meeting Pope Francis is certainly the highlight of my time in Rome,” added Hart. “He is burdened with keeping the church united and passing down the teachings of Jesus Christ to future generations. That is not an easy task. It was also a great reminder that the Pope cares about the church in America, even in rural Indiana. Here was a man who gave himself entirely to Christ and, looking in his eyes, I could not image that he has a single regret about that.“

The decision to join the priesthood was easy for both Hart and Underhill.

“I love Jesus Christ. And I came to the realization one day that Christ also loves me, so much so that He died to save me and everyone that I love,” said Hart. “If I truly believe that, then how could I not give my life to Him? And if I am to give myself to Christ, how is he calling me to do that? Ministry, meeting people where they are at spiritually and emotionally, being with them at the best moments of their lives and their worst, loving them as Jesus loves them is what made me want to be a priest.”

“My decision to pursue the priesthood began at an early age and was grounded in a love for the church, the sacraments, and Christ himself,” said Underhill. “A large part in this decision to pursue priesthood had to do with my family and local parish community of Our Lady of Hope. My family saw the importance of bringing me and my siblings up in the Catholic faith and this was aided in their decision to send us to Catholic schools. My vocational call was also strengthened by the prayers and support of the Catholic community of Washington. Through the mentoring of the late Rev. Gordon Mann and the continued guidance by Rev. Paul Ferguson, Deacon Dennis Hilderbrand, Rev. Juan Ramirez and Mrs. Yvonne Evans, I believe that they have shown me the true joy of ministering to the people of God in both my local community, as well as throughout the Diocese of Evansville.”

“I was fortunate enough to grow up in a household where faith was taken seriously,” said Hart. “My parents taught me about why it was important to go to church, to praise God, but as a little kid I still did not like to go. Maybe around second grade or so, I started to like going to church at St. Peter in Montgomery because of how beautiful the building is with its statues, architecture, stained-glass windows, and organ music, as well as the beauty of the scripture readings and the prayers at Mass. After a while, I started to realize that all of this beauty was for God, to help us experience His glory.”

COVID-19 has complicated their time in Rome and in fact almost stopped them from studying there.

“COVID complicated getting a visa to the European Union, so for a while it was not clear if we would be able to go,” said Hart. “With two weeks to spare before the flight was supposed to leave, the visas came through. We have to wear masks in the city of Rome and in all of our classes. Rome and the church have been around for thousands of years and have survived many plagues and pandemics. COVID will be no exception.”

“My time in Rome has been marked with some great opportunities thus far,” said Underhill. “Like everyone else in the world right now though, the COVID-19 pandemic has hindered much of this. I am able to still meet for in person classes, but as things change day-to-day, travel restrictions may become more strict.”

The two said they are also looking forward to some exploration while studying abroad and feel the future of the Catholic church will be in good hands.