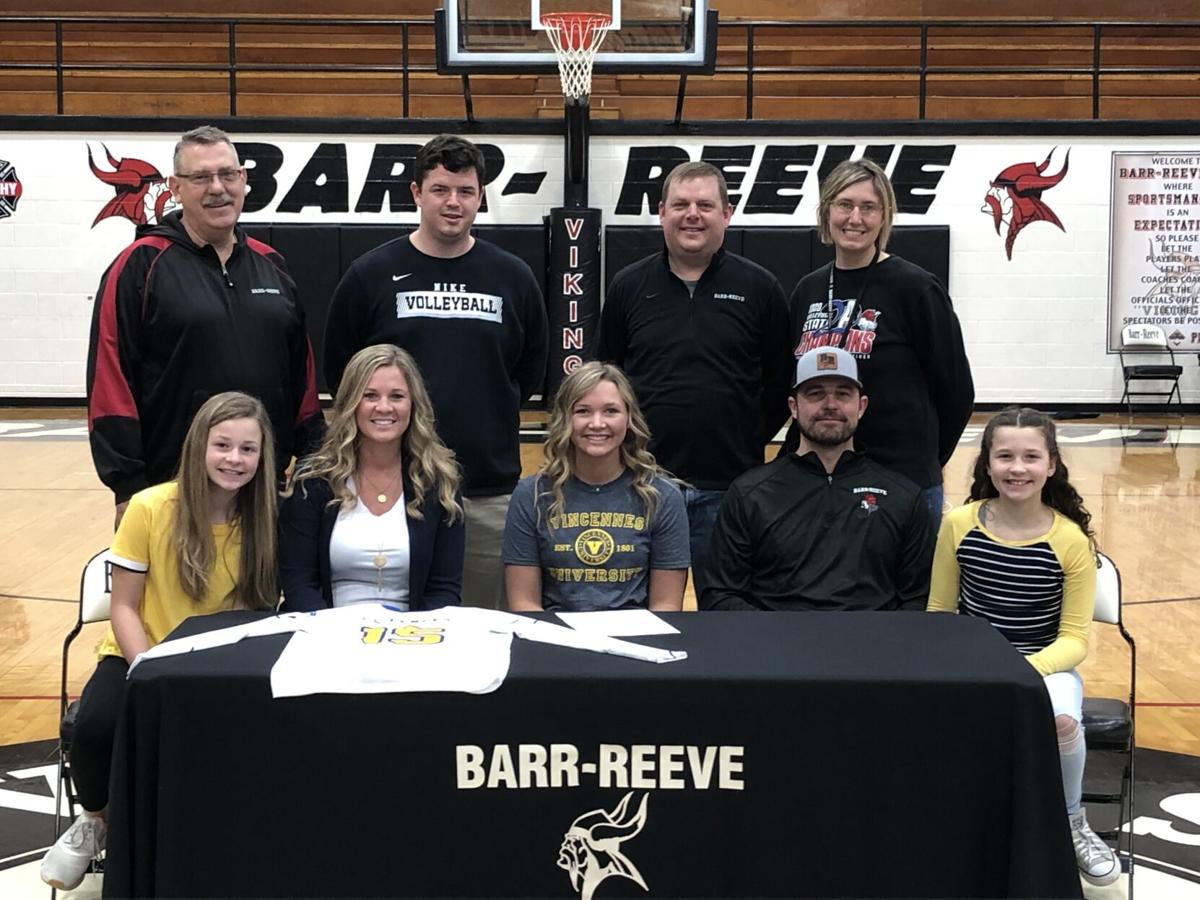 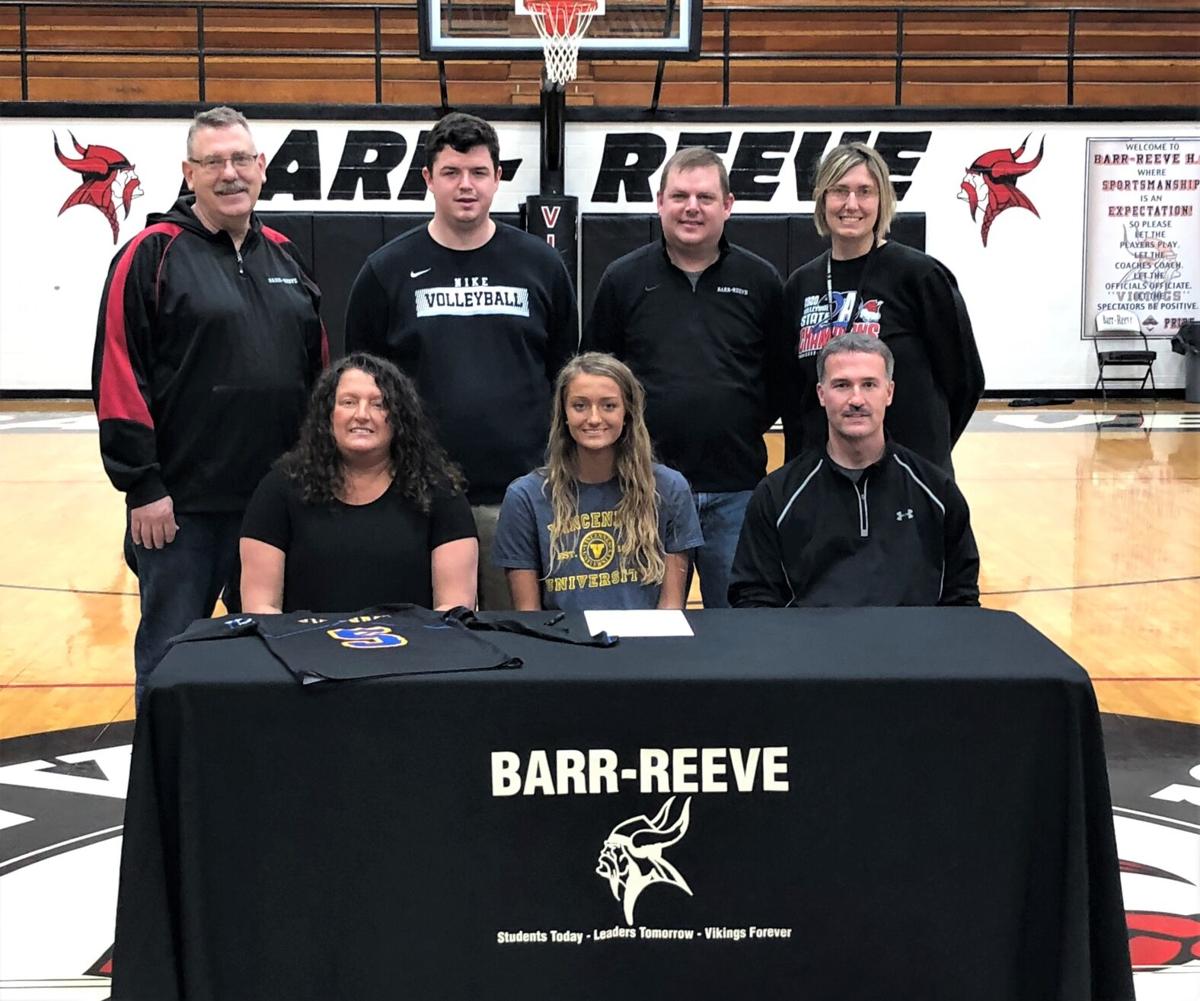 MONTGOMERY — The level of success Barr-Reeve’s Hannah Graber and Addison Ainscough have had in high school volleyball is practically unmatched as both were all-state with state titles in Class A and 2A. So when it was time to decide to play college volleyball why not keep a good thing going and keep playing together?

The pair of Viking seniors signed national letters of intent on Friday and are going to be playing together at Vincennes University next year for VU coach Gary Sien.

The pair have been friends and teammates for a very long time as volleyball players, however, the last two seasons they played together as part of the Viking basketball team as well.

Both players had some very practical reasons for choosing Vincennes.

“It was closer to home and it was more cost-efficient for my situation. They have a good program and I know that Gary has worked really hard and he wants to get a lot of players over there because he likes our programs,” said Graber.

Ainscough agreed. “It’s closer to home and more cost efficient. I’m glad I’m gonna be closer to my grandparents and family can watch me play, and Gary has made the program really good,” she said.

The pair have a long history of success together and hope to make more memories in the future.

“I think (we have been together) since fifth grade year and it will be nice to be playing with somebody who had so many experiences. I mean we know each other obviously really well. It’s hard to find a bond like that when you’re on the floor with new people so having that old teammate and a couple of other local girls over there is good. Some are from South Knox, Forest Park and Bloomfield,” said Graber.

“With winning the titles and the summers before our season at the Purdue camp there’s a lot a team bonding it goes on and those are just memories will probably never forget,” added Graber.

Three-time state champion coach Amber DeCoursey has had the best view as the pair has matriculated from freshmen to collegiate players.

“I mean you, could just tell at a very young age those girls were tight, they were close-knit, and they were a very athletic group together. The best way to sum both of them up was ‘coachable.’ They are hard-working, but great listeners,” said DeCoursey.

Coach DeCoursey had nothing but superlatives about her former players.

“For Hannah it was leadership. It was like having another coach on the floor. She has great court awareness as a setter, but she was also able the play front row. We decided this year to run a 5-1 with her, but we still gave her the green flag and the go ahead to be an offensive player as well. Addison is just a tremendous middle. With her body type, it just allowed her to do so many things defensively and still back to the ball,” said DeCoursey.

Graber and Ainscough wanted to thank everyone who helped during her high school career.

“I definitely want to thank my parents, my teammates and coaches, Mike and Amber DeCoursey, because they’ve really been helping me through all the college process. I guess they gave me a lot of advice, and without ‘Uncle Deco’ (Mike DeCoursey), I don’t really know where I’d be,” added Graber.

Ainscough added, “I want to thank my parents and my teammates. My coaches are amazing and Amber’s help me along the way with getting me I’m out there and talk a different college coaches. She has helped me do my best and she’s got me out there to get new opportunities,” she said.

Both felt VU would help them accomplish their academic goals as well.

“I’m either choosing between nursing and business,” said Addison. “I just want to get both the athletic and academic side of both things in college either somewhere in the health field or business communications arm,” said Graber.

Veteran coach Sien was chosen in June 2016 to head up the VU Trailblazer program. Sien’s first season as head coach at VU was also the first season the Trailblazers would compete at the NJCAA D-I level and VU continues to have success at that level.

Mrs. Catherine Irene Ritterskamp, Washington, passed away on the late morning of Thursday, April 15, 2021. She was 92. Katie was born March 20, 1929, in Pike County, Indiana, the daughter of the late Lowell and Golda (Ferguson) Swain. Katie attended Petersburg High School and was a member of…

Ralph E. Huffines, 77, passed away April 8, 2021. He was born Nov. 23, 1943, to Ralph D. Huffines and Eva (Free) Huffines in New Albany, Indiana. Ralph was a hunter, his main passion being squirrels while also enjoying mushroom hunting. He loved taking care of his 11 acres, as he called it. …