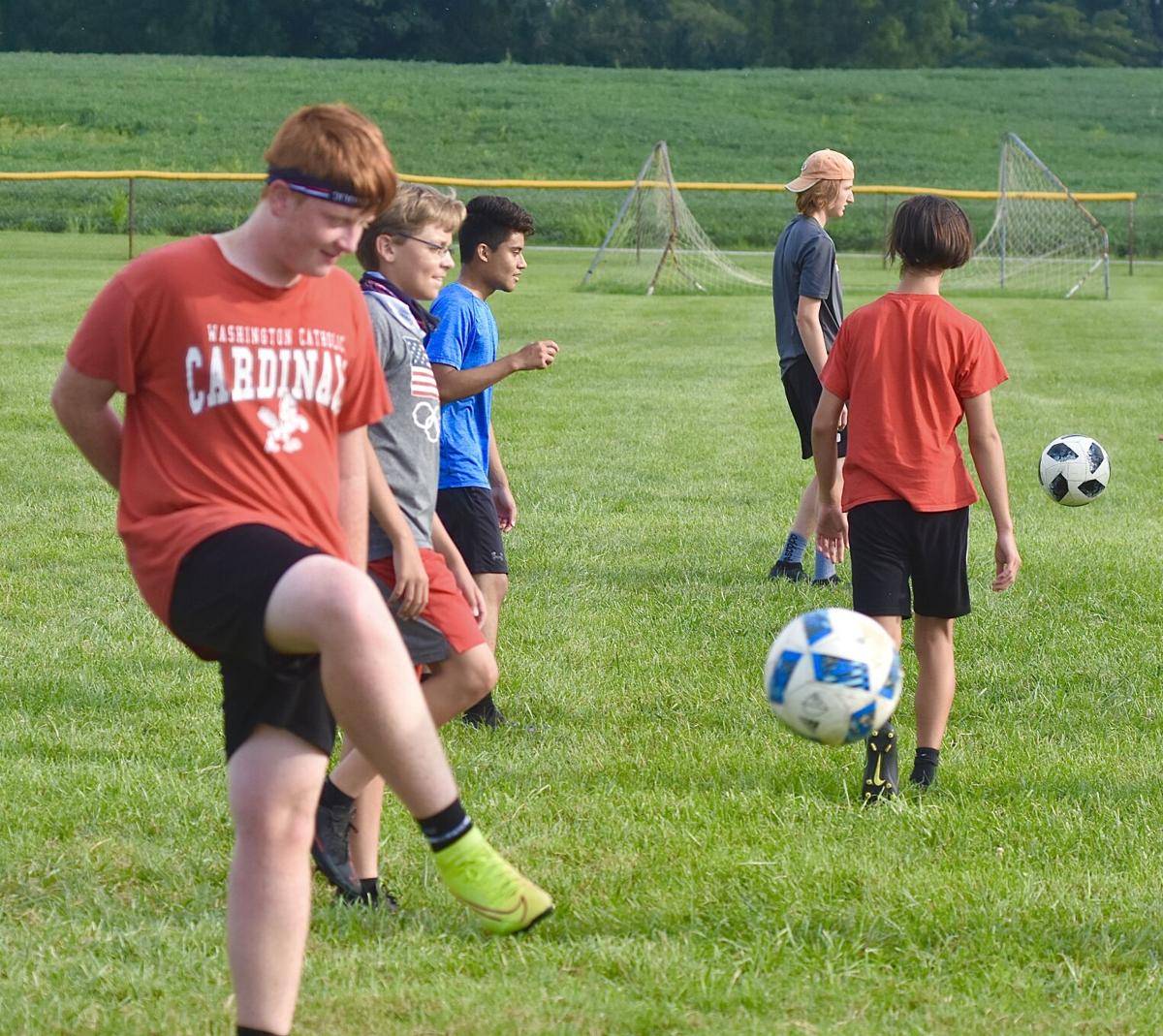 Logan Craney drills on Tuesday at Rees Field for WC. 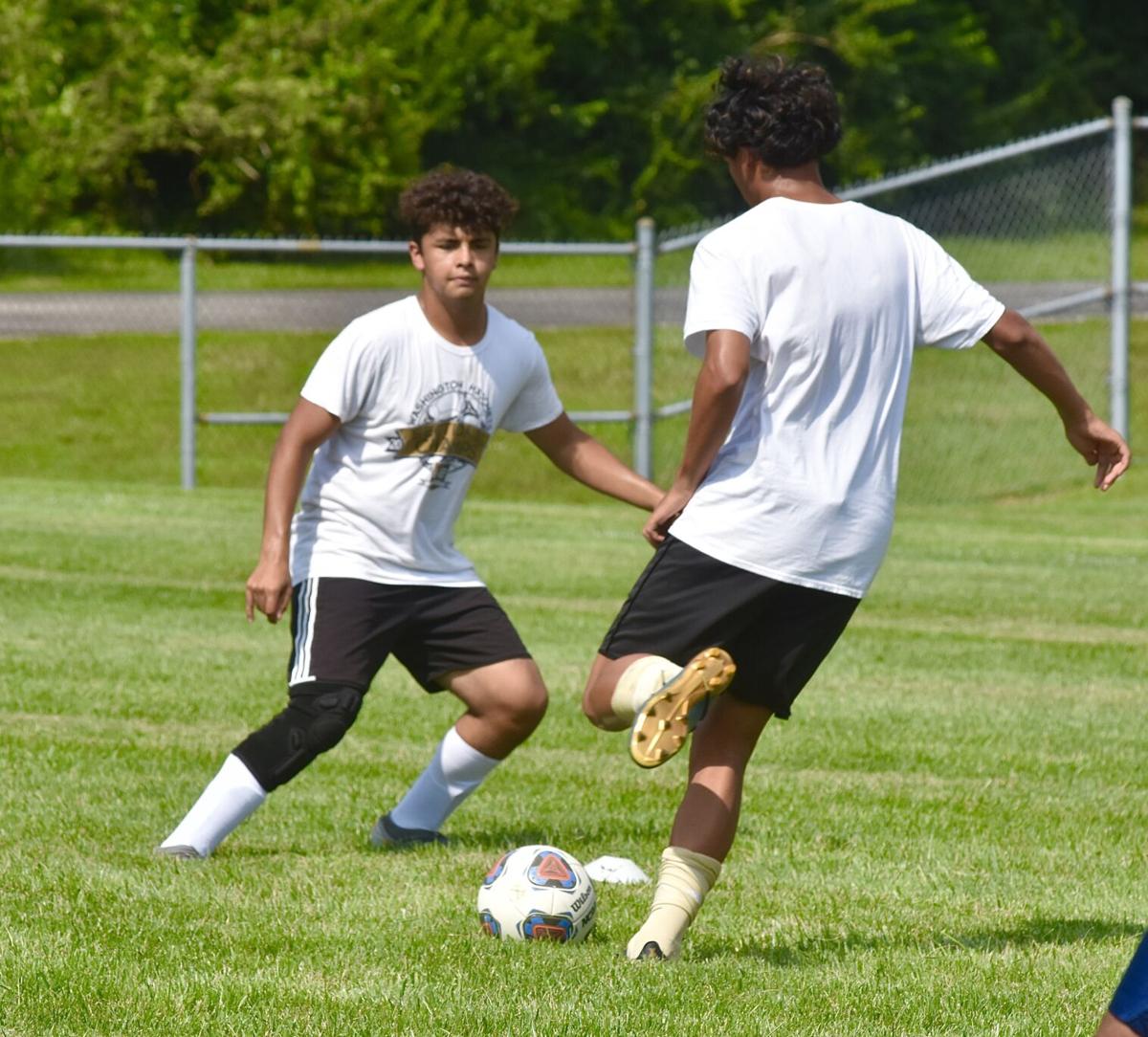 Logan Craney drills on Tuesday at Rees Field for WC.

The boys soccer season will be kicking off shortly with Washington and Washington Catholic competing in Class A and Class AA, while Barr-Reeve will begin as a JV team this season.

The Hatchets lost 13 seniors from its sectional title team in 2019 and went 16-4-1, ending the season at No. 4 in 2A. Although WHS lost big numbers to graduation, coach Evan Stoll still has 45 currently out for soccer and will have to get that number closer 40 before the season starts.

“We only have so many uniforms and so many seats on the bus,” said Stoll.

“We have a lot of new faces. Outside of Marvin Perez, Friday Htoo, and our keepers Joah Horrall and Wade Frances are the only remaining starters from last year. Joah is out right now after thumb surgery. He injured it after basketball but couldn’t have surgery for a while because of Covid restrictions,” said Stoll.

“We are excited. I thought we looked good at practice so far and we have kids who weren’t starters, but still played last year. I think you will see Connor Blair in the middle of the back, Tyler Boyd will be a big contributor this year, and Nathan Strange will too. You will see Tyler and Nathan in the middle and on the wing too.”

WHS has lost a lot of potent scoring over the last few seasons, but Stoll sees Bryan Morales as one of the major offensive threats in 2020.

“I think you will see us be a little more ‘system-based.’ Our juniors and seniors know what we want them to do. We may not be as talent-laden as we have been in the past, I think you will see a more team approach,” added Stoll. “Brian, Tyler and Nathan, will be where a lot of our goals come from. Marvin Perez will play a little of a defensive-mid role and you will see him as more of a distributor this year and more of an assists guy.

“In the back we will have Friday (Htoo). In the past two years we have lost an all-state keeper (Bryce Browning) and two all-state defenders (Caleb Taber and Grant Niehaus). Connor Blair will slot in there, but we haven’t decided on our wing backs yet.”

One of the areas that WHS was hurt by graduation was the loss of Niehaus, who created so many scoring chances off set pieces.

“Grant was just so athletic and tall, you won’t see many like him, but Connor Blair can just ‘go out and get it.’ He doesn’t have the height Grant had, but you will see him in a similar role, where he pushes up and serves as a target for us. We were deadly on set pieces last year, but truthfully, we haven’t worked much on them yet this year due to missing a month, but we will improve as the year goes on.”

The Hatchets will not be at Hoosier Cup this year, but will instead play a conference double-header that Saturday.

“I think we will be the favorite in the conference, but Heritage Hills is good and they tied us last year. Gibson Southern will be solid, and on paper those will be the teams that challenge us the most,” Stoll added.

The Hatchets host Jasper in a scrimmage on Thursday, however due to COVID restrictions, fans will not be allowed to attend.

The Washington Catholic Cardinal soccer team will start its third year under coach Dan Maley. The Cardinals hope to respond from a one-win season last year and Maley is excited about his returning group.

“This may be my favorite group so far in my three years. I have really enjoyed its attitude and how hard they have worked, in spite of the challenges,” said Maley. “I feel like we have shaped the ethic and the attitude and it will be a positive season, regardless of the results. We are looking for character first and if that happens, the results are going to come.”

“We have 16 players and one just joined, so it looks like 17 will be the number. We lost three seniors, but we won’t have any exchange students this year. They have been a group that has really helped us in the last couple of years,” said Maley. “We have picked up a couple of players who hadn’t played before and they have done really well.”

Will Burch is the lone returning senior for WC and he will be one of the captains.

“He has been great. He has done everything we have asked of him. He will play right mid and drops back to play some defense, as well. His motor just runs all the time,” said Maley.

He added that WC will not necessarily have a static three-man front, but will have players moving back and forth from top to mid.

“Will Bassler will be up front, Reed Burks will float between right wing and right mid, Shawn Babrick was on the left wing, but with his speed and engine, we will probably drop him to center mid, maybe even defense mid,” said Maley. “We are going to have to play to our strengths, and that may mean having to ‘batten down the hatches’ sometimes. We do have the ability to get forward and score, but really want to be able to snap things down.”

“Connor has improved a lot, especially in drills and with fitness. Mark has just tried out for that spot. He may be more athletic, but he is not as well versed in the discipline, however, both have their assets and both will get game time.”

Others who should see time are Logan Craney at left back, Zach Sipes at center back, but he is currently out with a stress fracture. Brady Hunter will be in the back, along with Bronson Bryant. Justin Sipes is a freshman, but he is also expected to contribute.

Farly Ramirez was with us two years ago, but didn’t play last year, but Maley said he has improved greatly since returning.

“It is disappointing not knowing when Zach will be back. He is a captain and he is still out here keeping us going though. I think next year we will be able to challenge more, with even more seniors, however I think two years from now, there are a lot of kids that will help this team come to fruition.”

The Vikings will field a co-ed JV team for first time in 2020. They will have six scheduled games, one to be played behind Antioch Church, August 24 against Evansville Day, with the rest on the road.

They are coached by Justin and Lauren Wilson, and Derek McCain, Caleb Spencer and Art Obaseki.