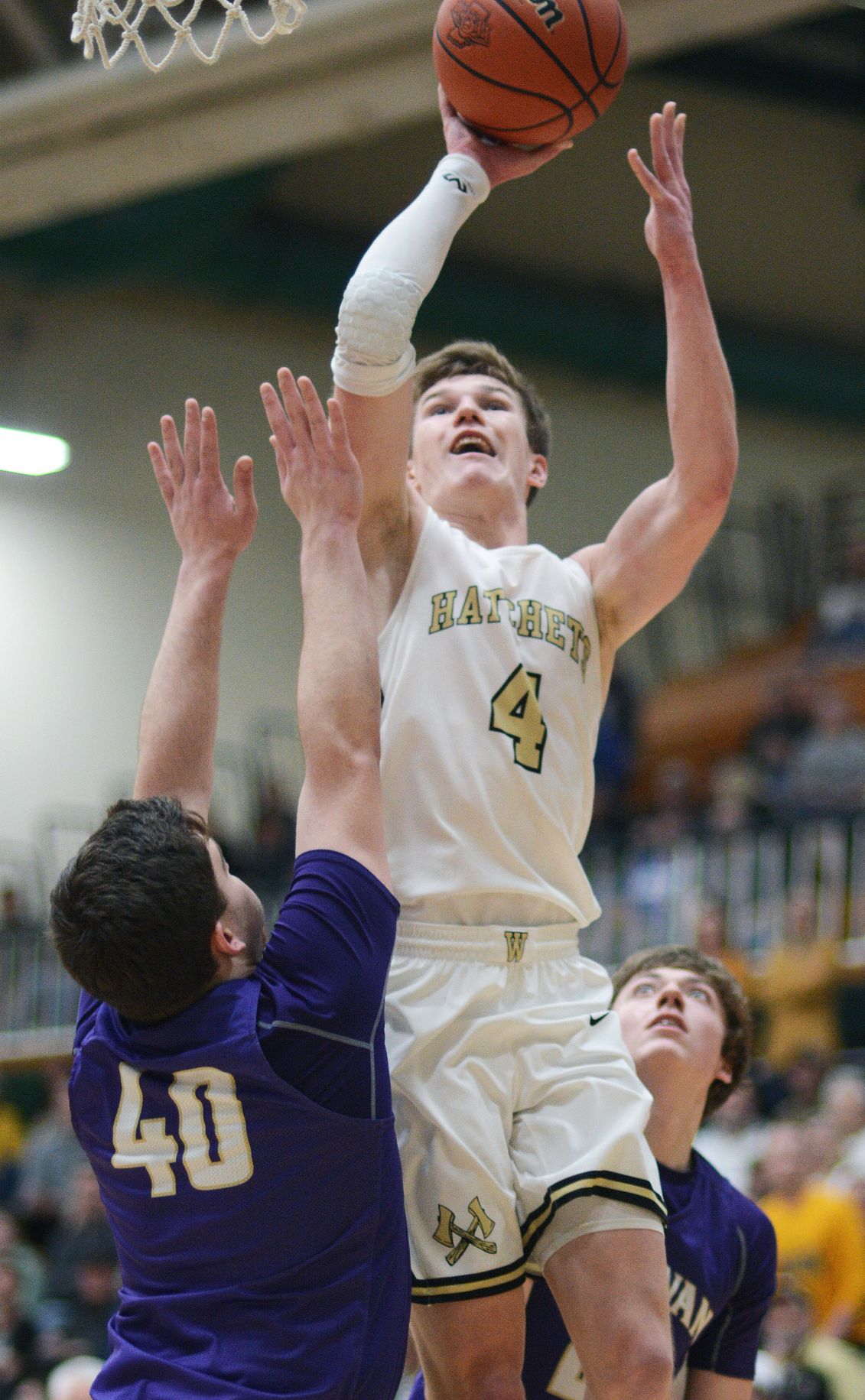 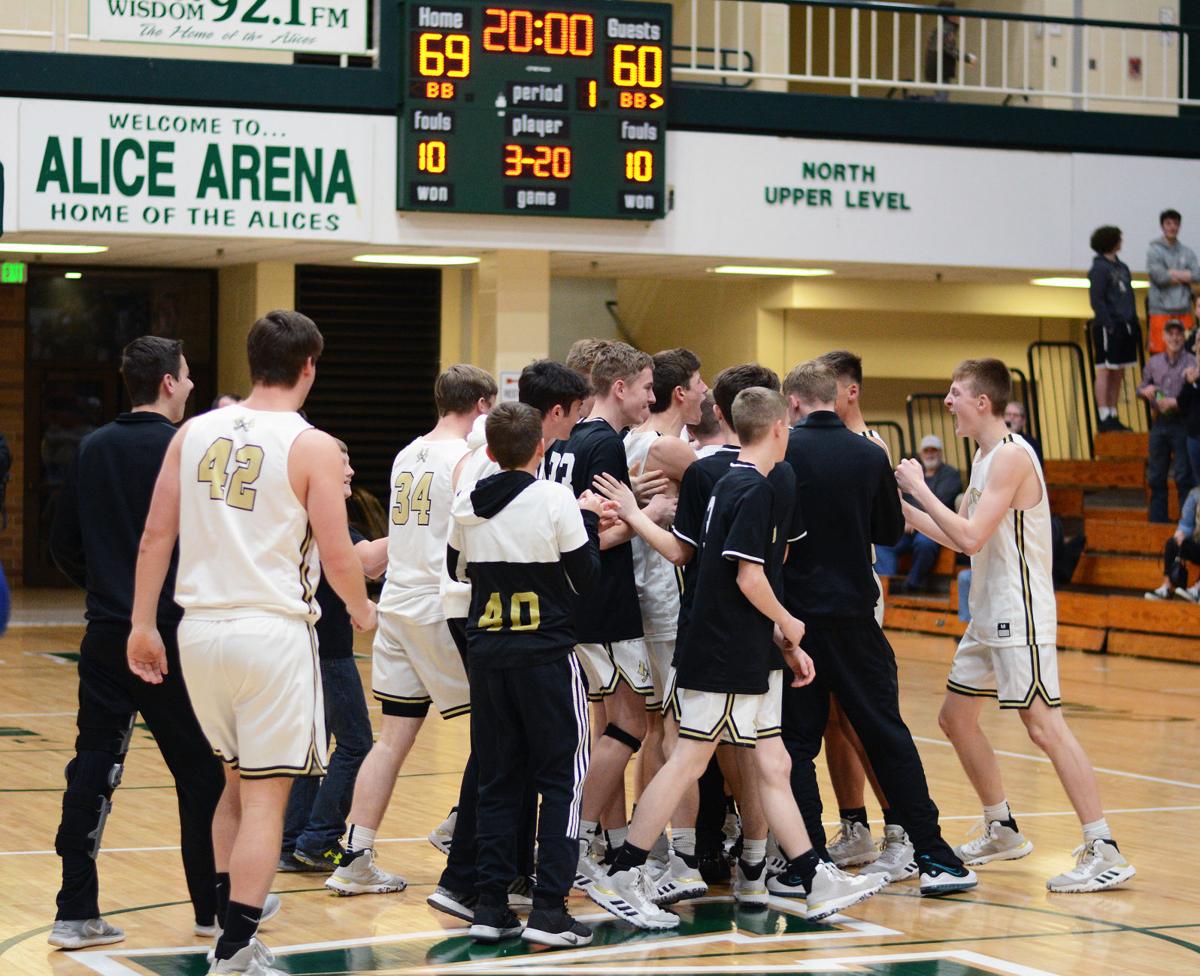 VINCENNES – So many times Vincennes Lincoln’s Alice Arena has been a House of Horrors for the Washington Hatchets.

But for one week, that dreaded venue became the place where Black and Gold dreams come true.

Washington claimed its first boys basketball sectional title since 2011 with a 69-60 win over Class 3A No. 10 Sullivan on Saturday in the championship game of Sectional 31.

After defeating Vincennes and Pike Central in the opening two rounds of sectional action at Alice Arena, Washington (20-5) wasn’t going to see a Sullivan (21-4) squad also looking to end a nine-year sectional drought spoil a Hatchet championship celebration. The Hatchets led 26-23 at halftime, then moved that lead out to 13 points at 47-34 after three quarters of play. And though a flurry of 3-pointers kept the Golden Arrows within striking distance in the final quarter, excellent Hatchet free throw shooting – 18-21 from the stripe in the fourth quarter – kept Sullivan at bay.

“My philosophy was ‘This could be our last game, so give it all you’ve got,” said Niehaus. “So I went out here and gave it everything I’ve got, every single guy that got minutes tonight gave it everything. I’m proud of my guys.”

Junior center Trey Reed scored 18 points – including 8-8 from the foul line in the fourth quarter – and did yeoman’s work on the boards and defensively for the Hatchets. Reed’s smooth reentry into the lineup last week against Evansville Memorial after missing much of the season with an injury was indicative of a team which accepted its roles and adapted throughout the season. Miiller credited his seniors – Niehaus, Kyle Mann, Kiowa Jones, Austin Gere, and Lance Roach – for their leadership.

“It’s a really good team, a really good group of kids. We’ve got great leadership from all our seniors. Our kids understand their roles and accepted their roles,” said Washington coach Gene Miiller, who led Washington to its 47th boy’s basketball sectional title. “I’m just so happy for this group. It’s just been a great group for me to work with, I’m just so happy for the kids. They have fought together all year, played together all year. I couldn’t ask more from them.”

Mann was 7-8 from the line and finished with nine points in the championship game.

“This is amazing to win a sectional my senior year with this great group of guys,” said Mann. “We put our heads together, we wanted this one so bad, we just went out and took it. This has just been a long time coming.”

Jones didn’t score in the championship game, but his outside shooting and defense has been a key for the Hatchets all season.

“It took all of us to win. I’m proud that we won it,” said Jones. “I just feel like it’s what it means to be a senior. You want to work for it for those three years, your senior year this is what you really strive to work for.”

Randy Kelley led Sullivan with 19 points, followed by 14 points from Christian Simpson. Washington led 17-10 at the end of one quarter as Logan Riester closed out the period with a buzzer beating 3-pointer. Riester finished with seven points. Joah Horrall added three points for the Hatchets.

Washington will face third ranked Greensburg (23-2) in the second game of the Washington Regional on Saturday. Top-ranked Silver Creek (25-2) will square off against No. 2 Heritage Hills (22-3) in the first game on Saturday.

Kathleen May, 87, passed away at her Washington residence on Nov. 23, 2021. She was born in Staten Island, New York, Dec. 27, 1933, to Joseph Emerson and Clara Catherine (Thompson) Boroughs. On March 8, 1956, she married Dudley May. He preceded her in death. Kathleen was a registered nurse w…