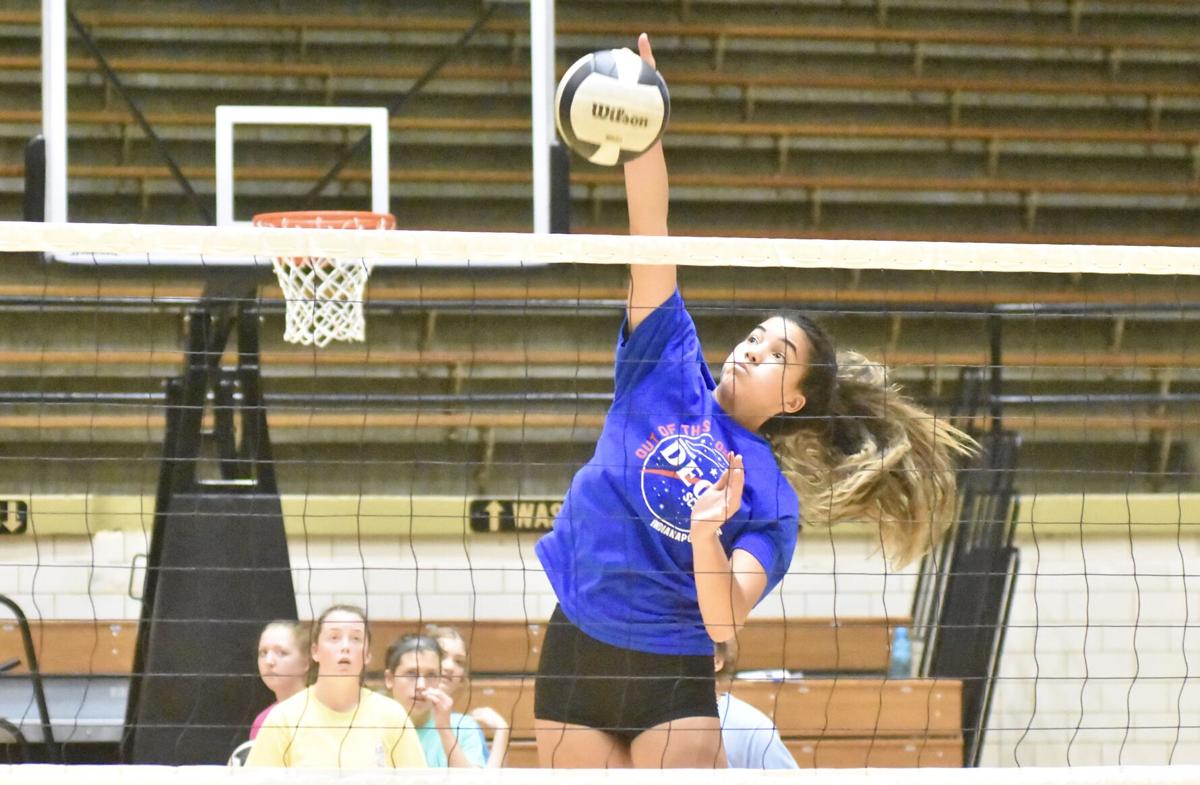 Washington’s Alaina Thorne works on a hitting drill on Monday in the Hatchet House. 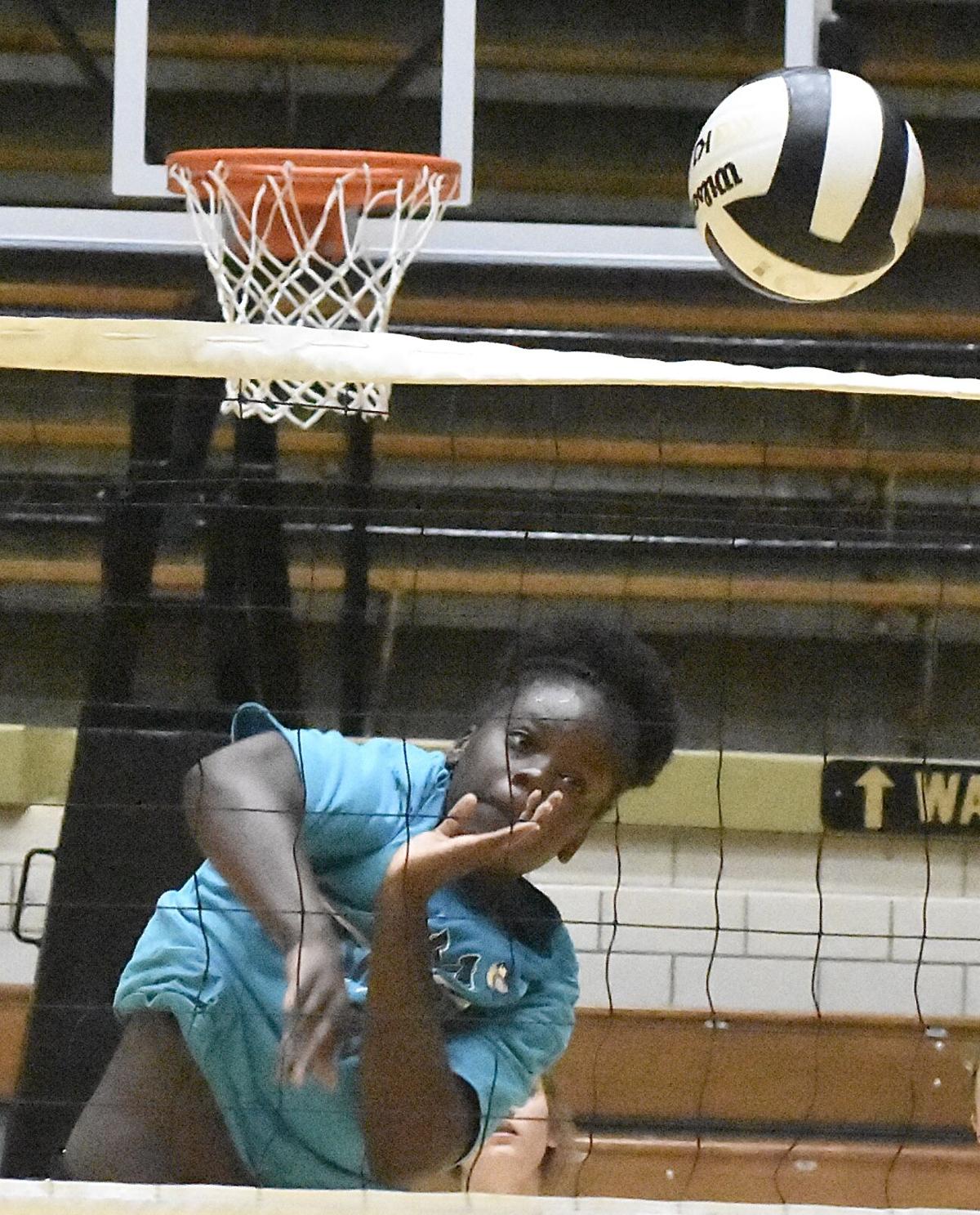 Kencia Levassuer is one of a solid group of returning hitters for WHS this season.

Washington’s Alaina Thorne works on a hitting drill on Monday in the Hatchet House.

Kencia Levassuer is one of a solid group of returning hitters for WHS this season.

One of the teams showing the biggest “up-tick” last fall was the Washington High School volleyball team. Under second-year coach Brett Matteson, WHS went from 11 wins to 20, and looks to make even more of an impact, now that Matteson in his third season.

Washington has had a group of girls who are now seniors and juniors, that have had a successful run of sectional titles (and some higher) in basketball and tennis, along with a 20-win team in volleyball, that lost a heartbreaking sectional to Vincennes last season.

“Having 6-footers hasn’t hurt us,” joked Matteson. “We are shaping up to have a really solid season this year. Some of the things that changed from my first year to my second was that I think we played a lot faster. If you look at the powerhouse teams in the area, you see how fast and how smart they play. Those are things we have worked on.”

Matteson’s team has five seniors; all who are expected to continue to make an impact.

“We have Bella Thorne, Jade Browning, Alida Ajradinoska, Albany Walden and Emma Williams, all are expected to play a lot. With kids like that, it has just made coaching so much easier because they understand the game. We have a group of juniors and seniors who are really beginning to understand how to win,” said Matteson. “They understand the little things that make a difference, and those are things that help a team win championships and that makes coaching allow easier.

“Our goal is to win a sectional, but my goal is to get to state. I really think that this team has the many pieces to do that; we have the size, we have the talent and the volleyball IQ to do that. My first year, I pushed them pretty hard and they resisted and didn’t have much fun, but last year they started to buy into things and look at what we accomplished. We can only go up from here if we keep working hard.”

Matteson feels that his personnel will be strong all around the rotation. Junior Alaina Thorne is a 6-footer who is developing into a strong hitter, along with setting the school record for blocks. Bella Thorne and Kencia Levassuer and Jade Browning will all hit, bringing size and athleticism.

Ajradinoska has been a four-year back row player, Walden is expected to be a back row player, Williams will be a setter, along with Alaina Thorne who will also set out of the back row. Williams is also one of the team’s top servers.

“It will be hard to replace Melida (Ajradinoska) at libero, but I think you will see Alida and Albany can switch some,” said Matteson.

He added that Trinity Reel, Taylor Walls, Brianna James and Ellie Reed, who is a hitter approaching 6-foot, will be helping and fighting for spots.

Another change is the number of players who have played club volleyball recently.

“You really can’t go from sport-to-sport without touching a volleyball in between any more. Bella and Alaina were on a club team, Kencia was on a club team, Emma and Ellie Reed played on clubs, along with Elle Stowers, Libby Humrickhouse, who are sophomores and have made tremendous improvements this year also. That has been a huge plus for us, just getting a chance to get more touches.”

WHS will also be playing in a new conference this season and Matteson knows the PAC will have its challenges. “Heritage Hills will be very good, Tecumseh will be good and Mt. Vernon has made the switch too, so they will be there as well, so there will some tough teams. We also added Sullivan to the schedule because they are a sectional opponent. With 13 teams in the conference, it should take 11 wins to win that conference.”

Matteson is pleased with where his team is right now. “We had a little rust when we first came out, but that was expected after four months without any volleyball. They have gone full bore,” he added. “I think we are going to be set up to make a good run this year.”

Official practice begins on Aug. 3 with season starting in mid-August.