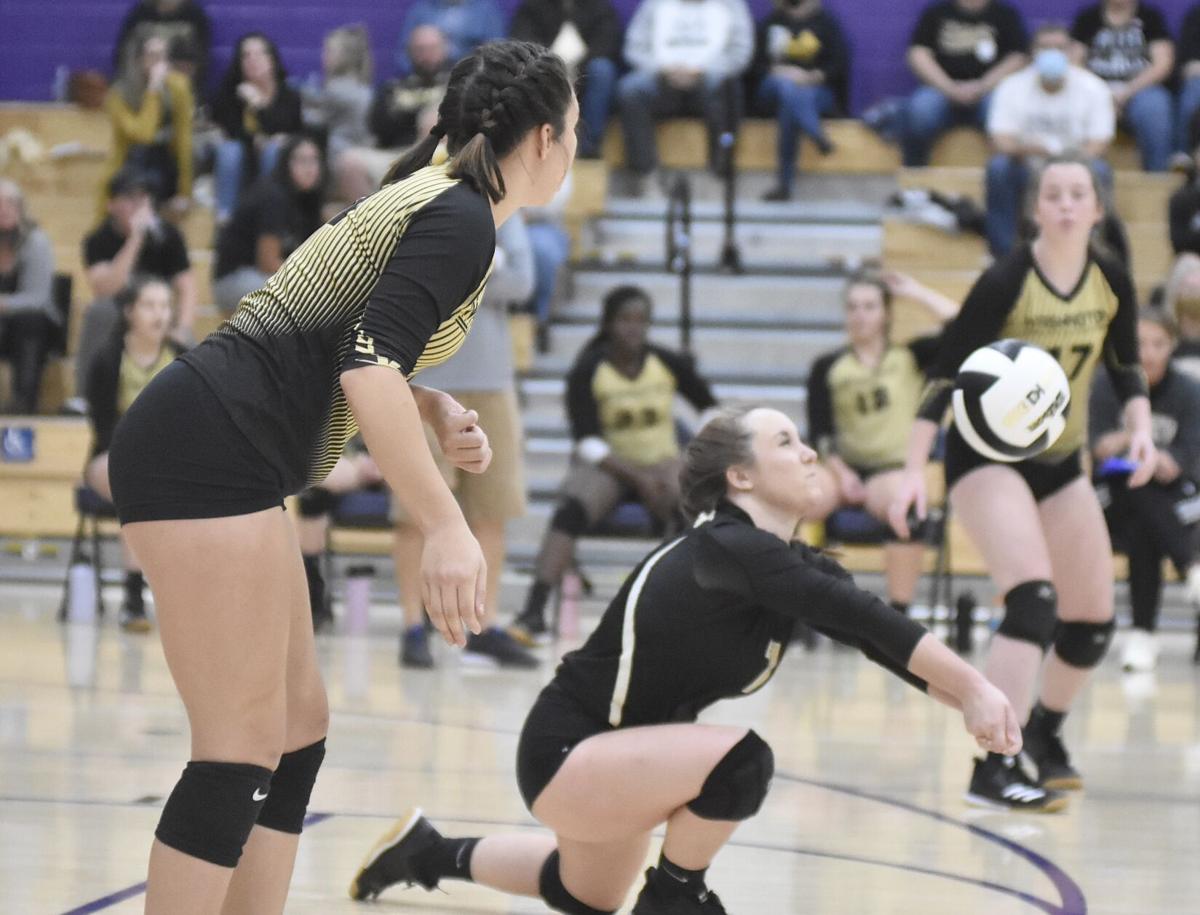 Washington’s Albany Walden digs a ball against Princeton on Thursday in Sullivan. 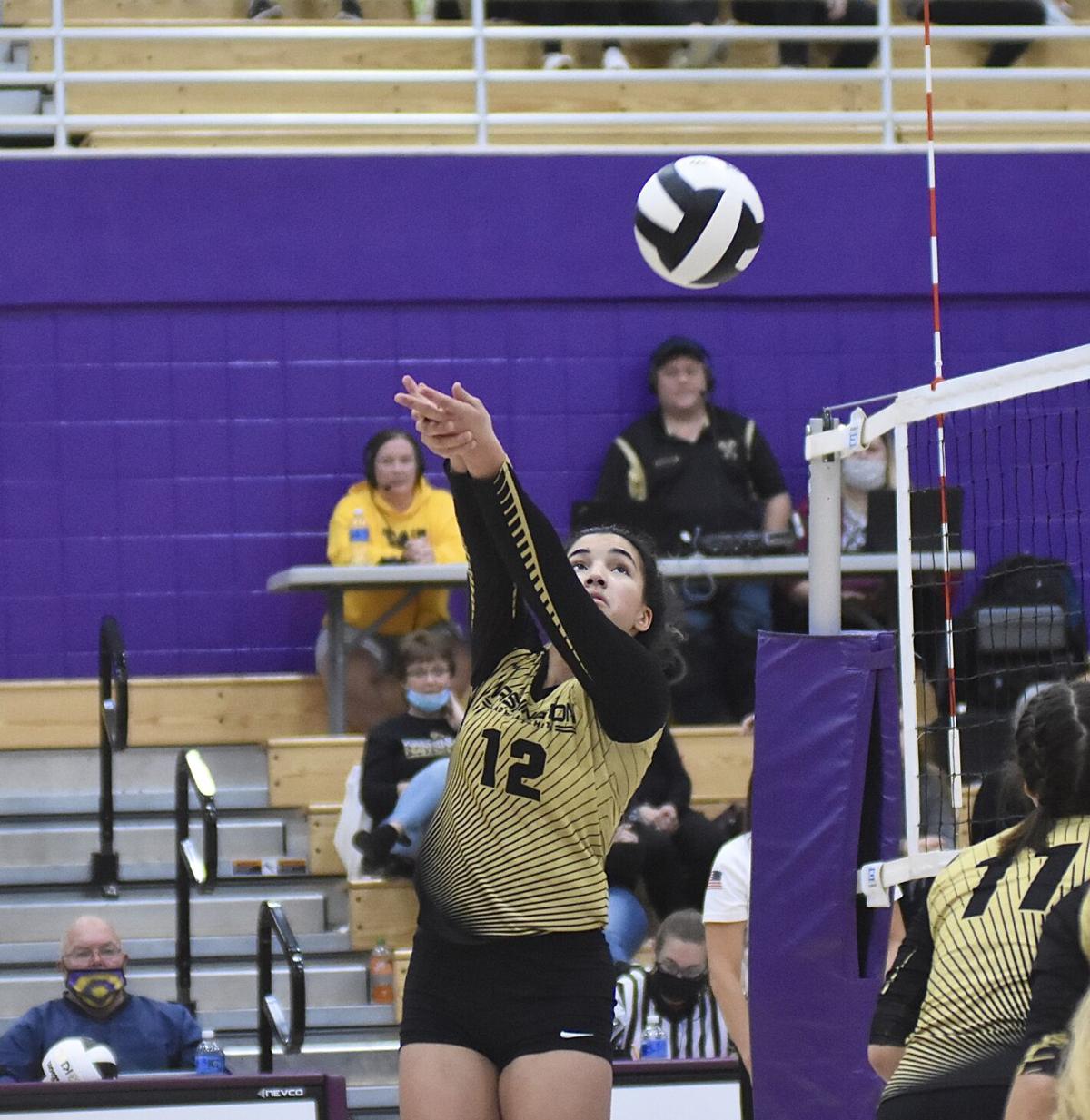 Lady Hatchet Alaina Thorne sends a ball over the net in the Sullivan Sectional on Thursday.

Washington’s Albany Walden digs a ball against Princeton on Thursday in Sullivan.

Lady Hatchet Alaina Thorne sends a ball over the net in the Sullivan Sectional on Thursday.

SULLIVAN — The Washington Lady Hatchet volleyball team took its first step towards winning a sectional with a victory over Princeton in the opening round of the Sullivan sectional on Thursday. The win was the first sectional victory in a long time for Washington High School, and moved WHS to 23-6, as they defeated Princeton in four games.

“Hats off to Princeton. I’ll tell you what, they battled their hearts out. They picked up a ton of balls tonight. I just kept telling the girls ‘You just got to keep battling, and that’s exactly what they did. They got down on themselves a few times, and you know, we talked about we’re in this together, and an individual is not going to do it, two individuals not going to do it, but you come together and we can be successful and that’s exactly what happened,” said WHS coach Brett Matteson.

Although Washington started out down 0-2, with Ellie Reed behind the service line, they quickly went up 3-2 including a dump-kill from Alaina Thorne. The lead see-sawed back-and-forth with Princeton taking the 6-5 lead, but Jade Browning’s kill made it 6-7, followed by a kill from Kencia Levasseur that gave WHS the tie.

The game was tied again at 10 and at 11 after a Bella Thorne kill. WHS took another lead at 13-12, but again the two teams would find themselves tied at 13-all. Washington tied the game at 15-all and with Alaina Thorne serving went up 16-15. The game remained close, but Washington was able to take an 18-16 lead as Princeton called its first time out. WHS was able to push it to 20-16 before the Tigers were able to get a side-out and led again at 21-17. Washington ended the game on an Alaina Thorne kill to make it 25-20 and move on the game 2.

WHS took a 4-2 lead in the second game, but Princeton came back to make it 4-all. The Lady Hatchets took a 7-5 lead but again the Lady Tigers battled back to move up to 9-7. A kill from Levasseur brought WHS back to you within one at 11-10, but PHS moved out to 14-10, their biggest lead of the night.

Down by six at 18-12 Washington took a time out and quickly picked up the next three points with Bella Thorne serving. However, the Lady Tigers pushed it to 21-16 before coming away with the 25-17 win and tying the match at one game each.

Princeton went up 3- 1 in the third game and extended it to 5-1 as Washington got the ball back. Princeton moved out to 8-4 but a kill from Levasseur helped slow the Tigers’ momentum. Princeton moved out to a 12-6 lead and Washington again took a time out. With Emma Williams at the serving line, WHS was able to cut it back to 12-11. The two schools traded points with Sullivan going up 15-13. Washington battled back to within one at 15-14 with a block/kill and eventually tied at 15-15.

Game 4 began with Washington and Princeton tied at 3-3, but Princeton would move out to make it 6-3. Browning again came up with a kill that slowed the Lady Tiger momentum, but WHS would keep chipping away, getting it back to 8-6. Princeton Village 12-8. WHS would get back to 13-10 with Alaina Thorne serving and eventually tying it at 13-all. WHS would take the lead 15-14 but both schools would continue to trade points.

The match was tied at 17 with Washington moving ahead 18-17. With Williams at the serving line Washington moved out to a 22-17 margin. Alaina Thorne picked up the final kill and Washington moved into the semi-finals against Lincoln on Saturday with the 25-20 win.

“This is the exact kind of game you want to have preparing for Vincennes. That’s what I told the girls in the locker room after. I said, ‘You know Vincennes has to sit up there and watch that battle happen and you know they can think about it, but we experienced it and that goes a long way,’” added Matteson.

“It’s the first sectional win in a long time for our program, and I know we’ve experienced a lot of winning throughout the regular season the last couple years but you know that sectional win will give them that confidence as a team that we can do this.”

WHS takes on Lincoln in the second semi-final game.