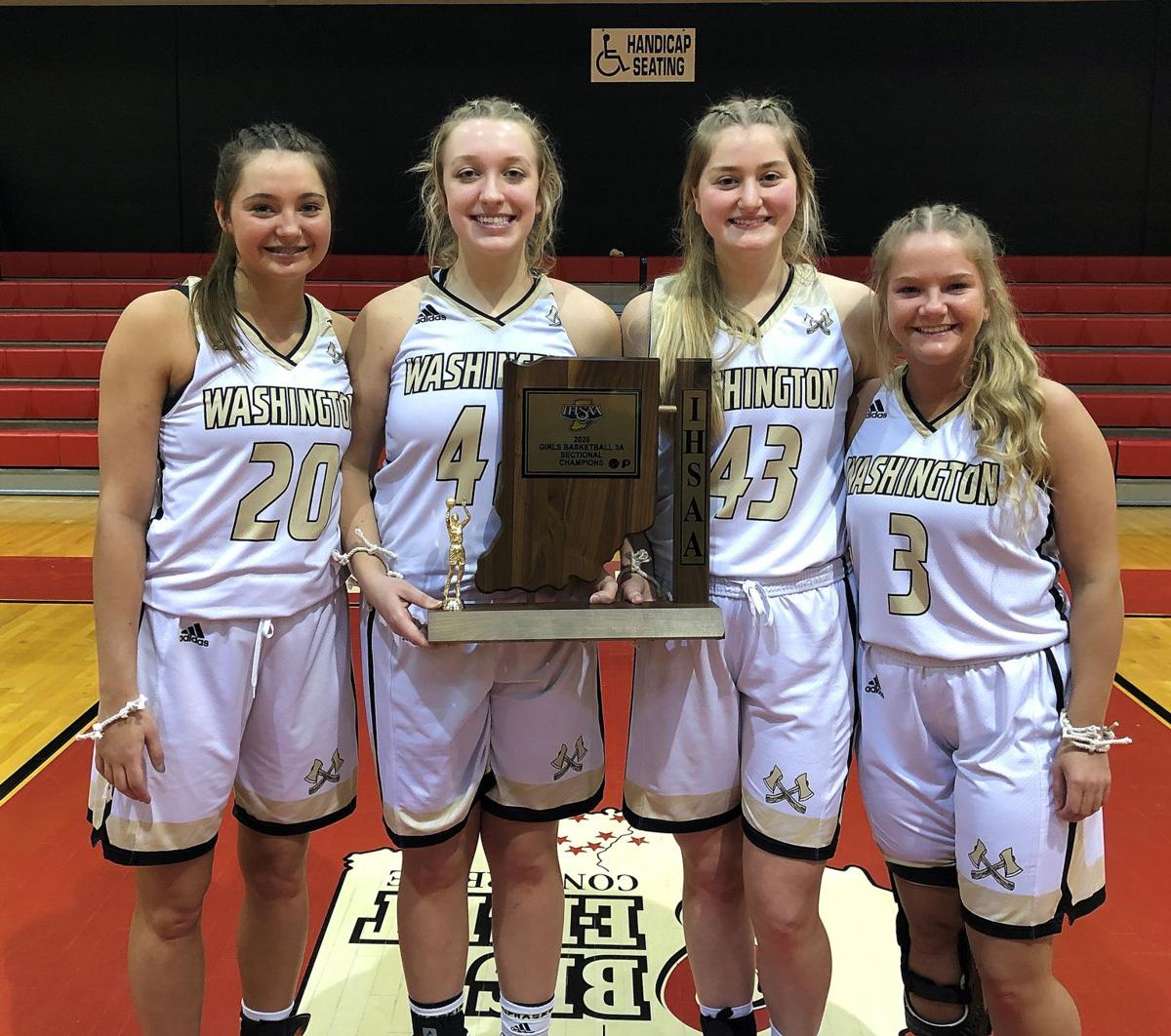 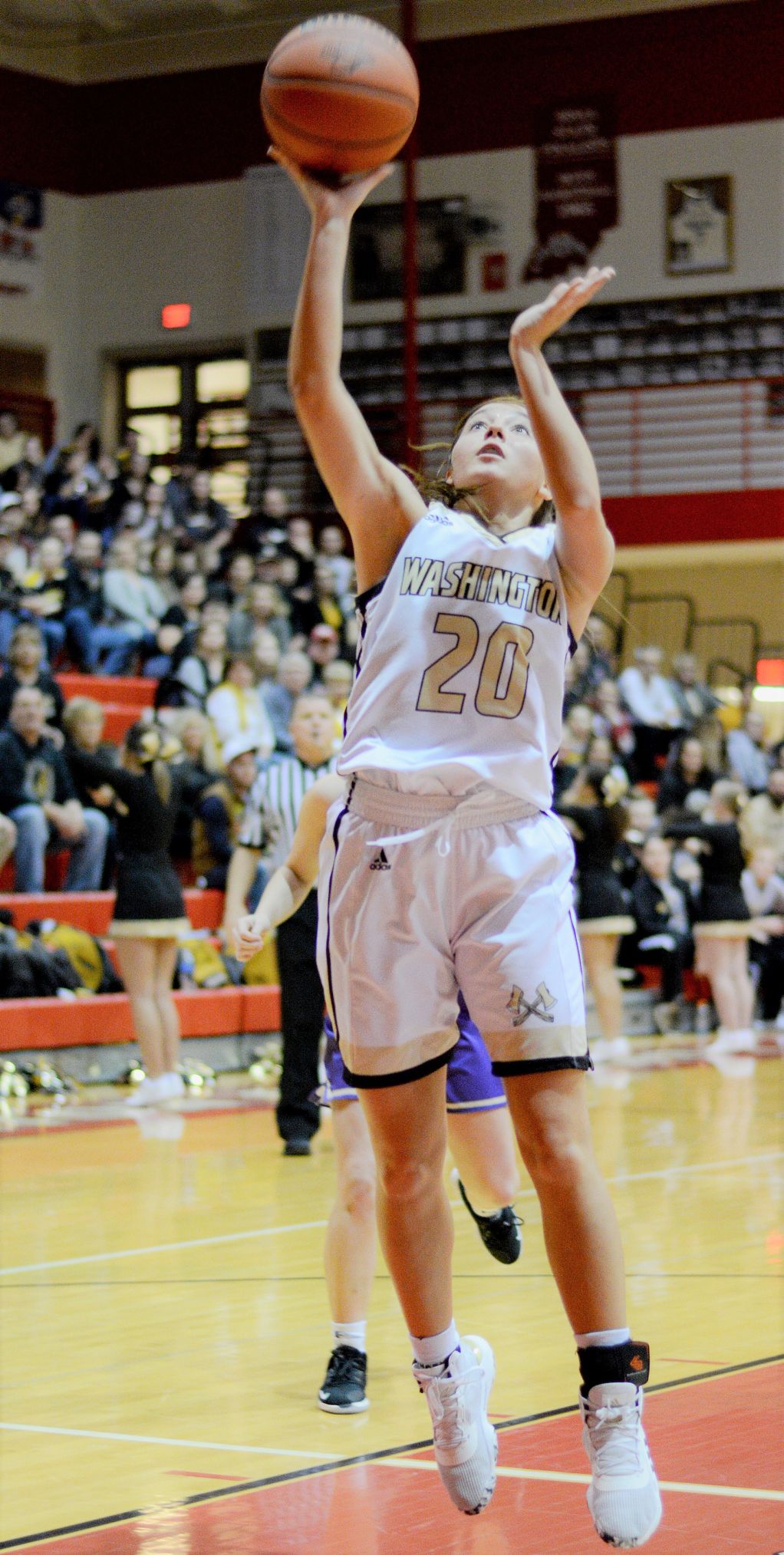 Washington’s Quincee Healy is all alone as scores two of her seven points in the Lady Hatchets’ 61-30 win over Sullivan in the championship game of the Princeton Class 3A Sectional on Saturday.

Washington’s Quincee Healy is all alone as scores two of her seven points in the Lady Hatchets’ 61-30 win over Sullivan in the championship game of the Princeton Class 3A Sectional on Saturday.

PRINCETON – After Friday’s thrilling win over rival Vincennes Lincoln in the semifinals of the Princeton Sectional, Washington Lady Hatchet coach Gretchen Miles reminded her team that one more game remained before they had achieved their goal of a sectional title.

On Saturday, the Lady Hatchets showed their coach that she needn’t worry – because history does repeats itself.

For the second time this season, Washington defeated Sullivan by the score of 61-30, this time resulting in the Lady Hatchets’ first sectional championship since 2004 and 10th sectional title overall.

Washington (21-3) used the same stifling defense that defeated Sullivan (17-7) on Nov. 22 and held Vincennes to 14 points under their season average on Friday. Seniors Ali Barber and Quincee Healy, who scored seven points apiece in the championship game, were key components of that defensive effort on both nights and throughout the season.

“This is like incredible; I don’t even know what to say. We just wanted to come in here with confidence and have the same strategy that we did last night. We just had to play our game, that’s how we were going to win this,” said Barber. “We finished out the season stronger than what we started. I think each game we were finding what works for us and getting into our rhythm. By the end of the season we were ready for this.”

Healy, who entered the starting lineup when fellow senior Melida Ajradinoska went down with a knee injury at midseason, spoke of the closeness she and her teammates have shown during a stellar season.

“It was a long road, but we made it. As the season went on, there is no team that is closer than we are, and we have worked so hard to get to this point, and we knew that this season was going to be something natural for us,” said Healy. “Coming into it we didn’t expect anything, but we worked our tails off to get to where we are, and we can’t appreciate the community enough for showing up for us because I have not seen a bigger crowd this season. There’s no other feeling like it.”

Washington led at all stops against Sullivan, including 16-8 after one quarter and 26-12 at halftime. That margin stretched to 19 points at 41-22 after three quarters and continued to build throughout the fourth quarter, allowing Miles to bring her starters off the floor in the waning minutes to thunderous applause from the large following from Hatchet Nation on hand, a fan base that filled over half the gym on Saturday.

Alaina Thorne and Kencia Levasseur led the way for WHS with 15 and 12 points respectively, followed by 10 points from Jesse Ledgerwood. Jade Browning added four points, followed by two points apiece from Hadley Faith, Chloe Browning, and Emma Dant. Ajradinoska also saw the court in the final minutes but did not score.

Miles, who guided the program to a sectional title after playing on so many Lady Hatchet championship teams during her record setting-playing career in the 1990s, said her players reaction as the game came to a close and the championship was at hand was “priceless.”

“I’m just super proud of the kids, just to see the looks on their face at the end of the game. It’s just priceless as coaches that we get to hang out with them every day, we get to see them develop not only as basketball players also as people too,” said Miles. “These kids’ mindset has been that way all year. But you just never know when you’re dealing with 15-18-year-old girls, and Sullivan is a very good basketball team.

“But these kids came out, we kind of got a little stagnant especially in the second quarter, but the second half they just really took off,” said Miles. “Again, it has been a group effort all season long. You can take every stat column, every hustle play, that every has big time been involved in to make us successful.”

No. 12 Washington will face top-ranked Salem (22-3), a 54-52 winner over No. 5 Silver Creek in the Charlestown Sectional championship game, in the second game of the Charlestown Regional on Saturday. No. 3 Evansville Memorial (22-3) will square off against No. 8 Greensburg (23-3) in Saturday’s first game at Charlestown.