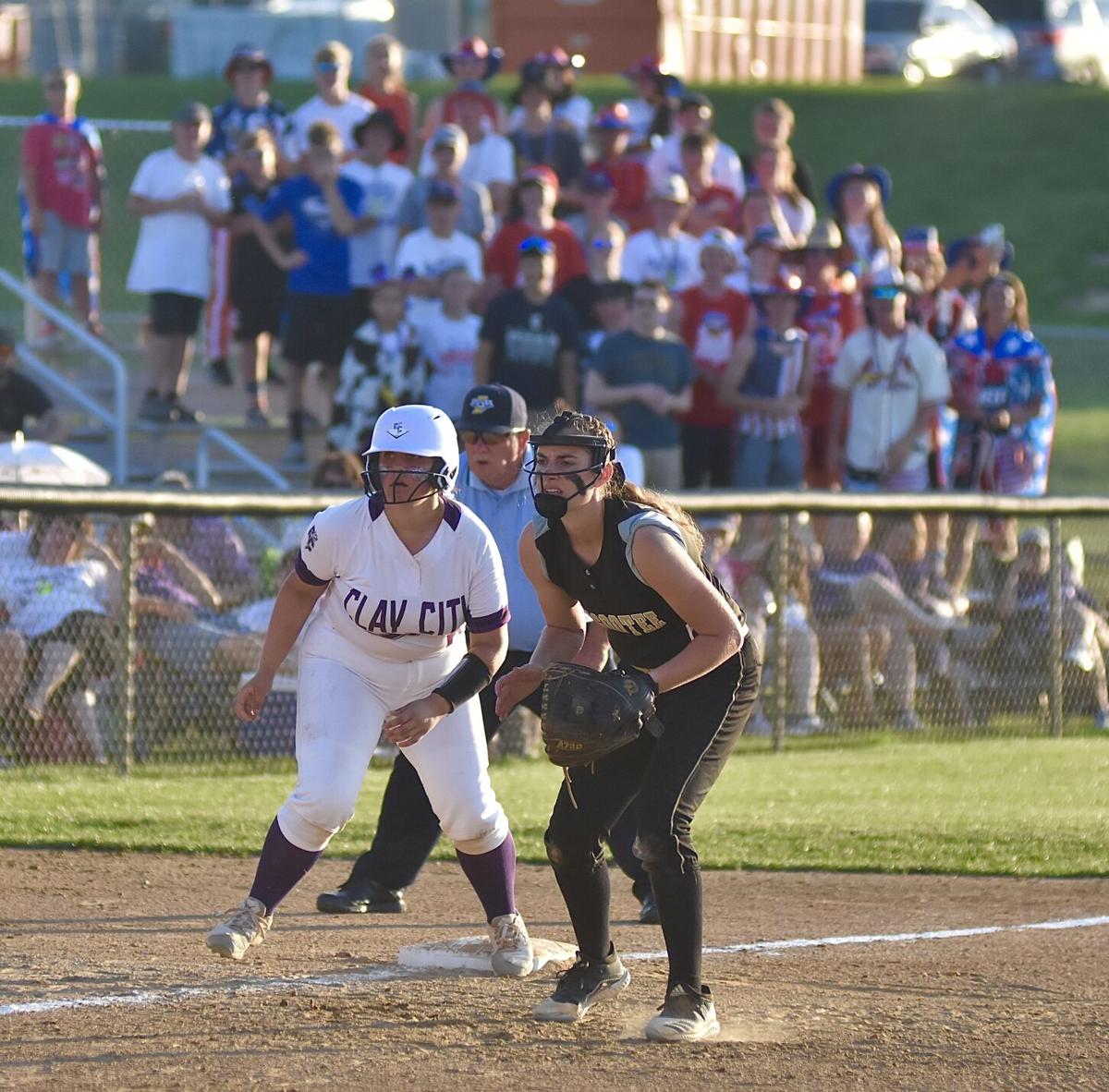 Loogootee’s Jaelyn Walker holds a Clay City runner on base on Saturday night. 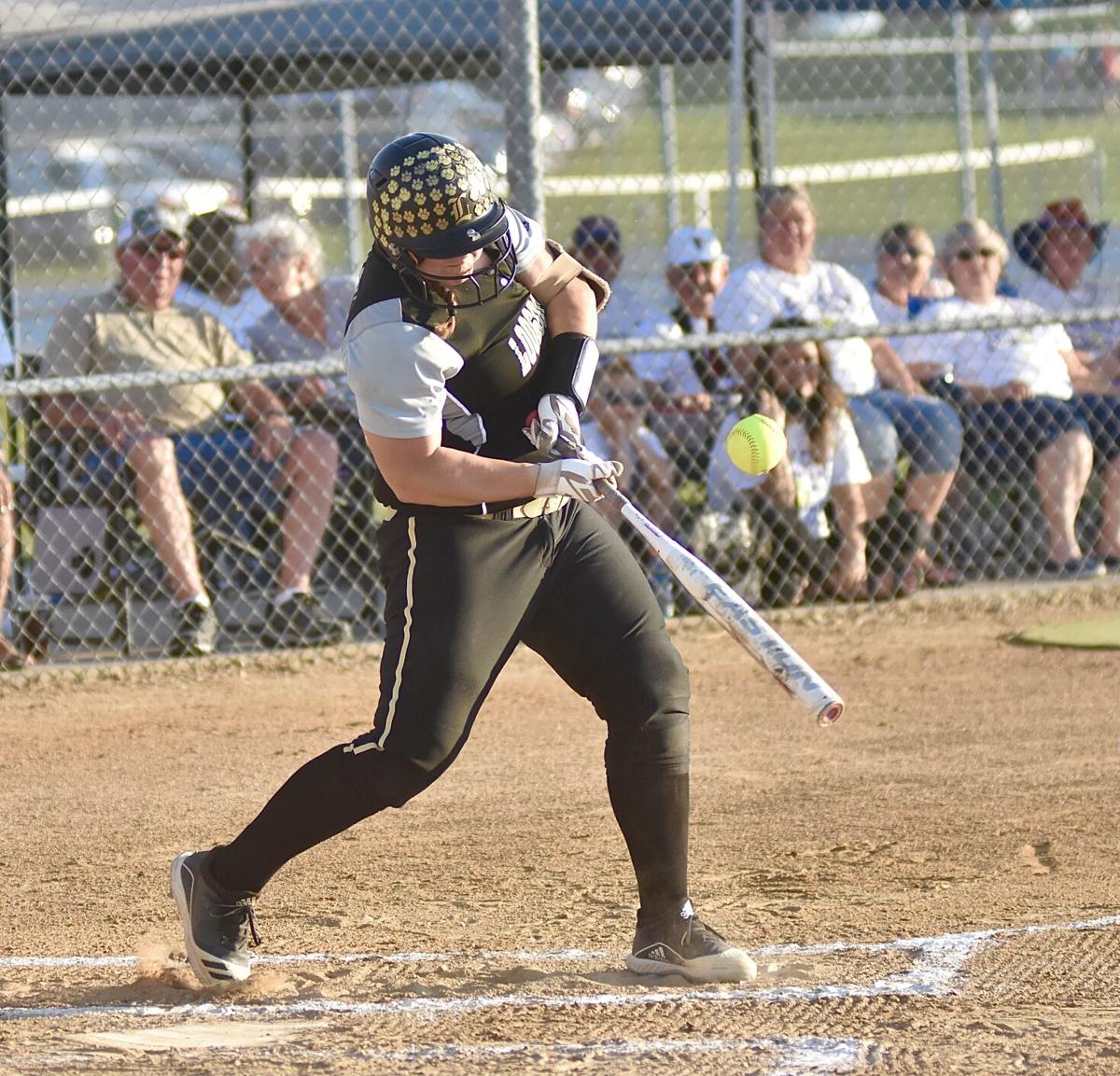 Adie Nolley fights off a pitch on Saturday at semi-state on Saturday.

Loogootee’s Jaelyn Walker holds a Clay City runner on base on Saturday night.

Adie Nolley fights off a pitch on Saturday at semi-state on Saturday.

ELNORA – The Loogootee Lions softball team fought and clawed all season, but the Clay City Eels proved to be just a little too slippery at the end of the semi-state finals at North Daviess on Saturday. CC game up with a pair of runs late in the game which proved to be just enough to hold off the surging Lady Lions, to take the 7-5 win.

However, with a young outfield and impressive performance from freshmen Allie Henninger and sophomore Koutni Rumble, the future looks bright for the Lions. The other side of the coin is they will also have to replace one of the most talented and successful senior classes in school history.

“Our seniors were absolutely amazing. They were fun to watch and there aren’t enough words to describe everything that they’ve done. But, you know, here’s the reality of it is — we ended up one day short, three runs short. Those seniors are going to get a move on with their lives and become incredible adults and do great things in their communities wherever they end up. We look forward to our juniors, sophomores freshmen and our incoming class. I look forward to work with them a little bit over the summer, see where we’re at and, see who’s going to fit in where and do what. The future is bright for Loogootee softball and that stage is being set based on what these girls have done,” said Loogootee coach Greg Clark.

Loogootee opened the game turning an error into a triple on a dropped fly ball. Kyleigh Courter then scored on a Grace Lingenfelter fly for an early run in the top half of the first. Lion pitcher Isabelle Waggner found herself with bases loaded and two out, but Lions escaped without trouble.

Clay City was able to come up with the equalizer in the bottom of the second, as the Eels strung together a pair of hits to make it 1-1. Clay City opened with a lead off a double in the third and ended up loading the sacks with no one out. Eel hurler Elyssa Seacrest then deliver a two-run double and CC went up 3-1. The Eels’ No. 9 hitter Trinity Sankay also delivered a two-run single to go up 5-1. Henninger came in to relieve Waggner and picked up a bases loaded double play to end the inning without any more damage.

Waggner singled and ended up on third after two stolen bases. However, CC brought in lefty Sophia Moshes, but Loogootee was able to score on a Jaelyn Walker sacrifice to cut it to 5-2.

The Lions continued to chip away as Courter opened the fifth with a solo home run to right center, and Loogootee cut the lead to 5-3.

Henninger looked strong with a pair of 1-2-3 innings for the freshman and seemed to frustrate CC hitters. Asia Crim and Sara Street combined for the fourth run in the top of the sixth. Lindsay Nolan, running for Street, stole second and advanced to third on a fly, but a ball hit back to the pitcher ended it.

Henninger faced her first trouble in the bottom of the sixth as the first two Eels reached and two would score on Lexi Thompson’s single and make it 7-4.

The Lions were down to its last three outs, and with two outs, Addie Nolley, in her final at bat at Loogootee, hit a homer to cut it to 7-5. VanHoy added a single and Waggner represented the tying run, but Clay City was able to hang on get the out and go to go to the state finals.

Clark who suffered health problems through out the season, also wanted to thank his staff.

“I think our coaches Lingenfelter and Davis put in so much hard work. People don’t know all the hard work they put in and everything they did day in and day out, doing things that I couldn’t do. I don’t know if they know, but I try to tell them. You know they always look at me like I’m kind of crazy, but they need to have an understanding how much I really appreciate everything they’ve done,” said Clark.

The State Championship will be at Center Grove against Northfield.