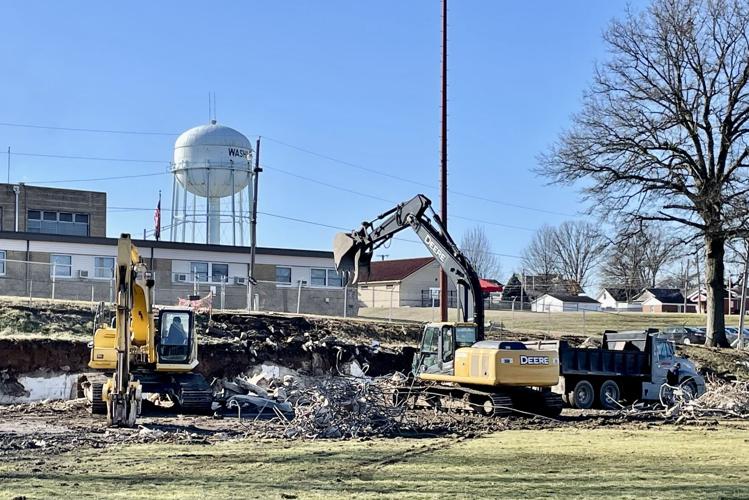 Demolition of the home stands continues at Hatchet Hollow this week. 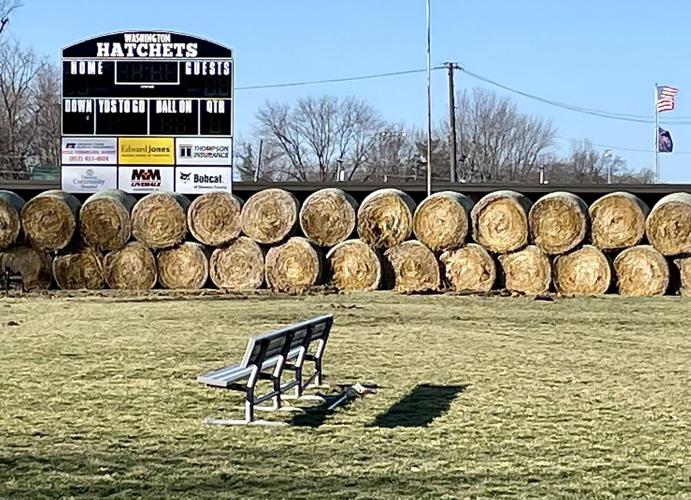 A vison and sound barrier was put up behind the Upper Elementary school that will later be use to help regrow grass, later in the process.

Demolition of the home stands continues at Hatchet Hollow this week.

A vison and sound barrier was put up behind the Upper Elementary school that will later be use to help regrow grass, later in the process.

What was once a dream is now becoming reality for Washington sports fans. The new Hatchet Hollow project is well underway with the demolition of the concrete bleachers last week.

The $4.5 million multi-purpose facility is slated for completion this fall and the first step was the razing of the Depression-era stands and press box.

Superintendent Kevin Frank is pleased with the progress to this point.

“I want to thank Memering Farms and Donnie Gress for the demolition services, and Armes Grain for helping to haul it away,” said Frank. “This was a donation so it doesn’t count against the budget, so that is a real positive.”

Another project that has been completed is the hay barrier that has been set up to keep the noise and activity from distracting the students during the school day.

“The nice thing is we can use it to regrow grass later in the spring,” said Frank.

With the demo of the home stands, press box and visitors’ locker room being completed, Frank said that the next step will involve more excavating.

“After that, there are new light poles, and they will probably start to work on the field in late March or early April. If you want an idea of what it will look like, the same architecture firm also did Brownstown Central. We are going to meet with the architect on Thursday night and we will know more about the timeline and the budget.”

Hatchet football coach Joe Morris is excited about the project, from both a coaching standpoint and his job as Chamber of Commerce director.

“First of all, I want to thank our superintendent and school board for the investment, not only in our program, but also in our community. These are the kind of projects that will help to attract business to this community,” said Morris. “Yes, it will help the game-day experience for everyone, from the climate-controlled locker rooms and press boxes to the food court. But as much as anything, it will provide a much safer environment for players and fans. I think when one looks at the Hatchet House and football facilities, it will be some of the nicest in the area.

“This facility just makes sense with the way it is being put together, from the eight-lane track to simply being so close to campus for all the students,” Morris added.

Athletic director Larry Cochren is also excited to see the project take shape. He said that they are still finalizing some of the track facilities (shot and discus site) but expects that they will be finished at roughly the same time as everything else.

“It’s an exciting time to watch the facility start to take shape. We had some great help from the community with help with the demolition. It nice when community members can become involved,” said Cochren.