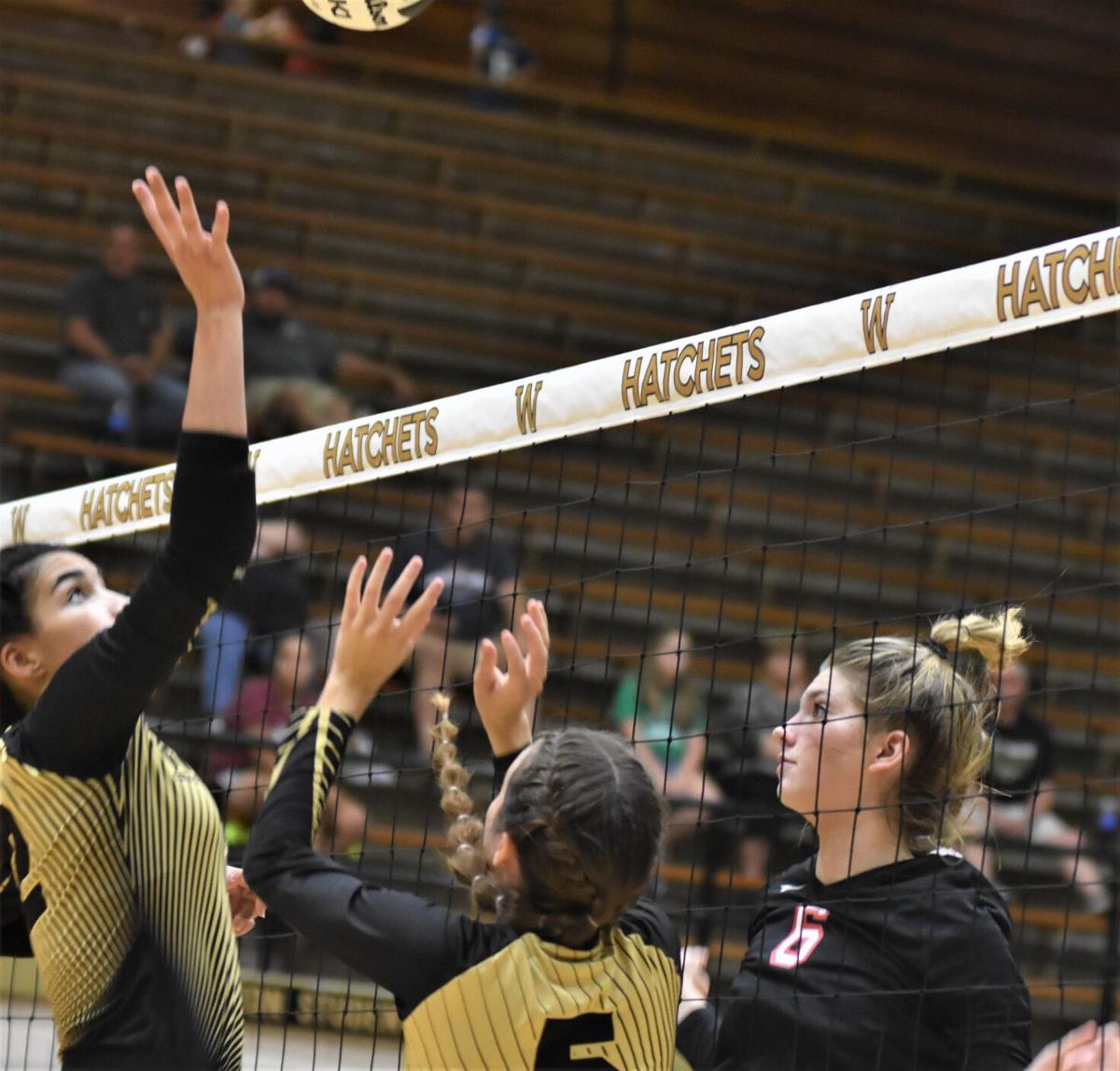 The Hatchets are potential sectional opponents in Princeton this week. 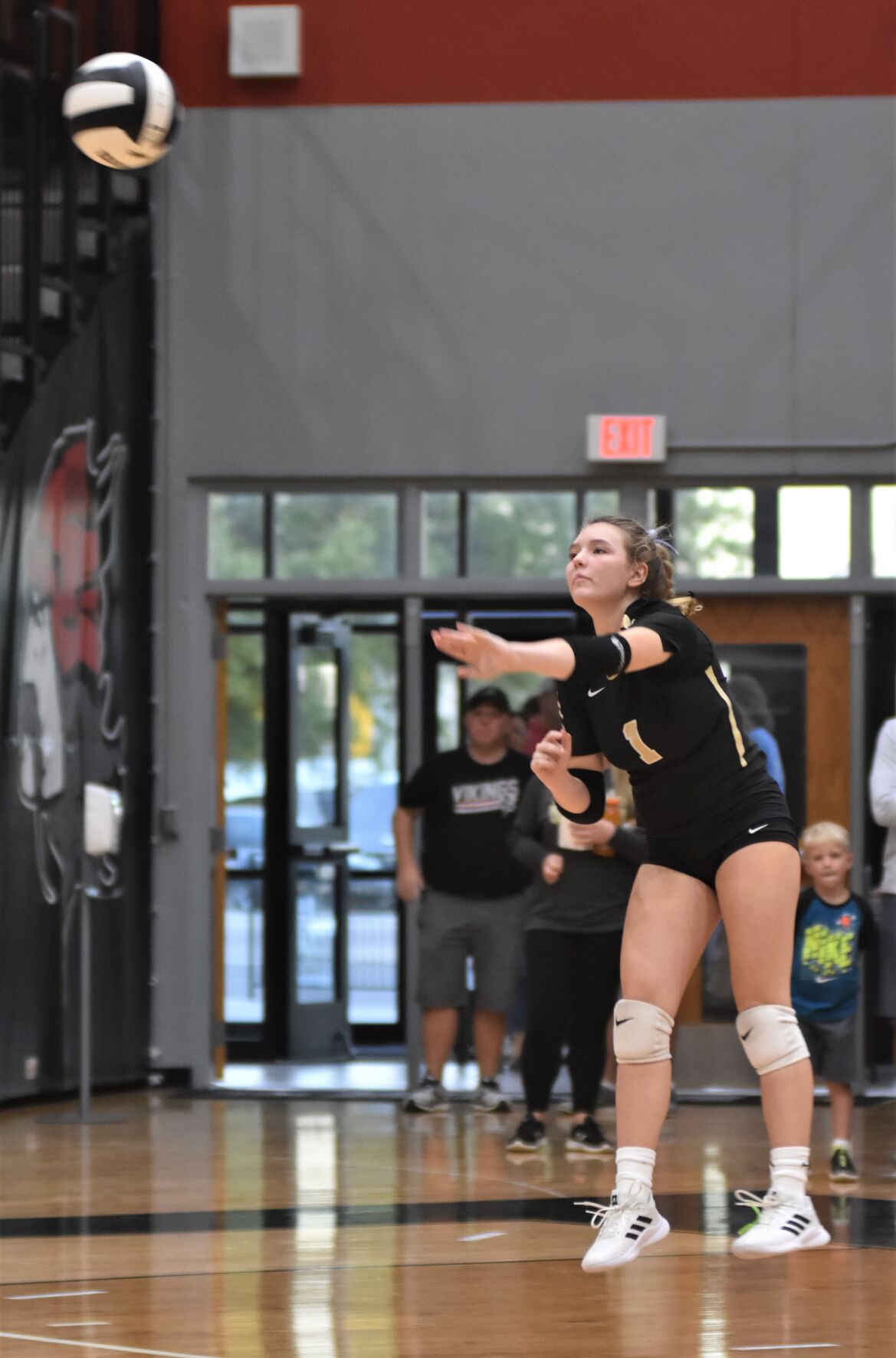 Brooklyn Summers of Loogootee serves against Barr-Reeve earlier in the year.

The Hatchets are potential sectional opponents in Princeton this week.

Brooklyn Summers of Loogootee serves against Barr-Reeve earlier in the year.

On Saturday, the volleyball sectional hits hard with Washington and Barr-Reeve at Princeton and and Loogootee playing at Loogootee.

Barr-Reeve, who has moved up to 3A after a second state title in three years, ended the year at 20-8 and as Blue Chip Champions.

The No. 18 Vikings were led offensively by junior Dylan DeCoursey with 228 kills, Sarah Graber with 190 and Emma Wagler with 159. DeCoursey also led with 202 serving points and 50 aces, followed by Willow Thompson with 154. Hannah Swartzentruber and Hannah Bledsoe combined for 61 of the team’s 118 blocks, while Colleen Trambaugh led 259 digs, followed by Wagler with 186. DeCoursey and Wagler also handled most of the setting, with Wagler having 412 assists and DeCoursey getting 372.

They will play Sullivan and Pike Central game at 11 a.m. on Saturday after receiving the bye. During the year, they beat all sectional foes Princeton, Washington, Lincoln and Sullivan, all without giving up a game to any of them.

Washington ended the year at 10-18 and 4-8 in the PAC. However, those numbers may be a little deceiving as the started out the season without several of their top players and went through a multi-week COVID bout.

WHS was led by Alaina Thorne with 200 kills and Kencia Lavesseur with 186, both who missed several early games due to recovering from injuries. Eliie Reed is another near-6-footer who added 146 kills, while freshman Olivia Gilley had 105 and senior Trinidy Reel had 115. Another freshman who made a big impact was setter Kenna Garland, who had 643 of the team’s 754 assists. Reed and Garland were the team’s top servers with 156 and 151 points, respectively. Reel, Brianna James, and Levasseur also had over 100 service points each. Levassuer was the team’s top digger with 257, while James had 243 and Thorne had 230.

Over the season, WHS lost to sectional opponents Pike Central, Barr-Reeve and Princeton, but beat Lincoln and Sullivan.

Loogootee comes in as the No. 4 team in Class A and are the defending state runners up from last year. They are 23-7 and finished second in the BCC, with only a close 3-2 loss to Barr-Reeve. They also beat every sectional opponent they played. They did not play their Saturday opponent Lighthouse (3-16).

The Lions are led by Bellarmine recruit Kylie VanHoy with 271 kills and was second with 243 assists, while Brooklyn Summers posted 540 assists. Jocelyn Strange led with 424 receptions and 368 digs, Abbey Fuhrman led with 26 blocks, along with Kyleigh Courter had 53 aces. The Lions ended the year 6-1 including a win of BNL. They will play Lighthouse in the 10 a.m. game.

The championship will be at 7 p.m.

Sharon Mowery, 73, passed away at her Washington residence on Oct. 22, 2021. Sharon was born April 2, 1948, in Kentucky, to Earl and Opal (Jackson) Gist. Sharon was blessed with a daughter, Melissa (Vaughn) Heldt of Washington and two grandchildren, Tyler Gilley of Paducah, Kentucky, and J.W…