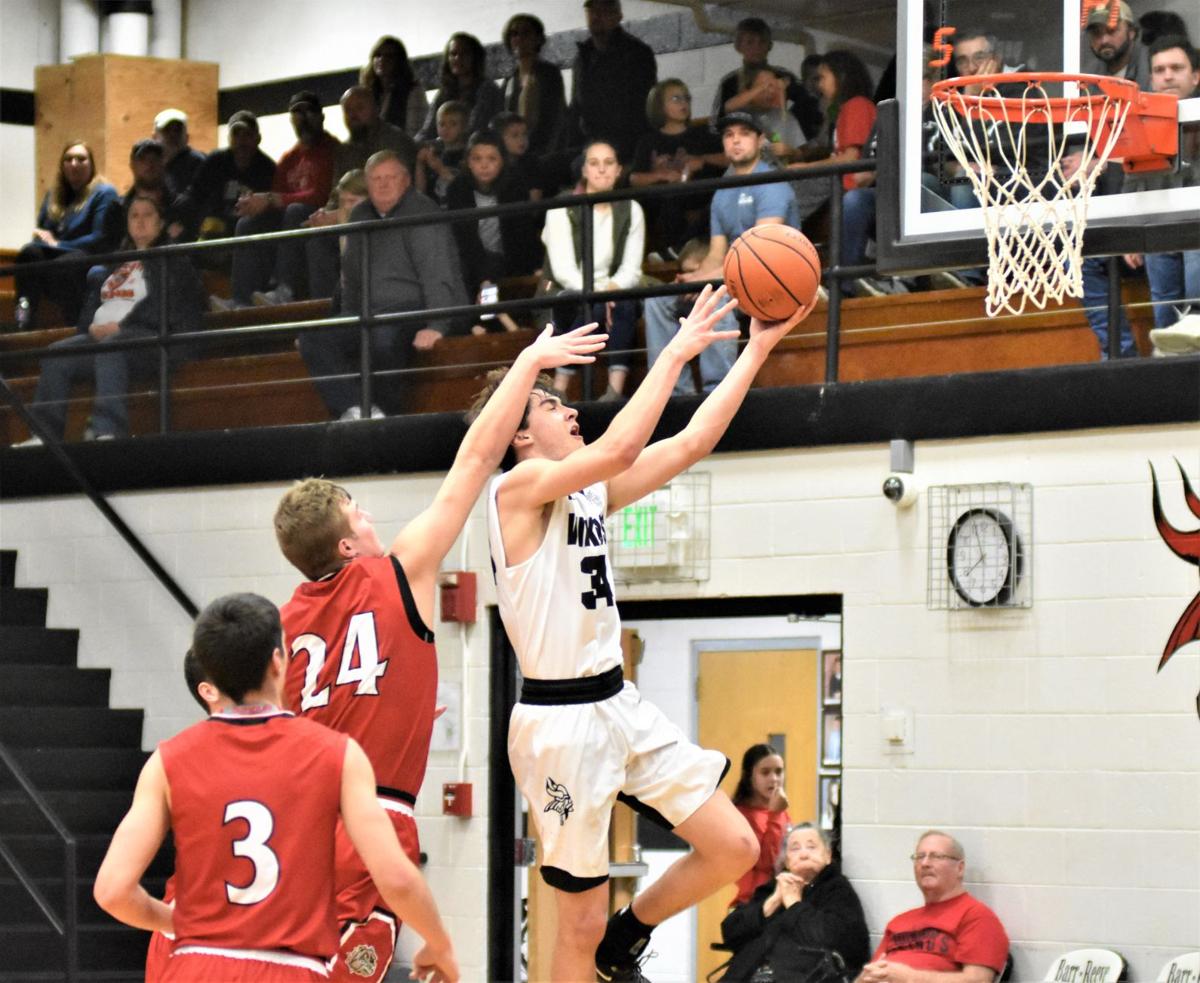 Hagen Knepp goes up for a layup against Orleans on Saturday night. 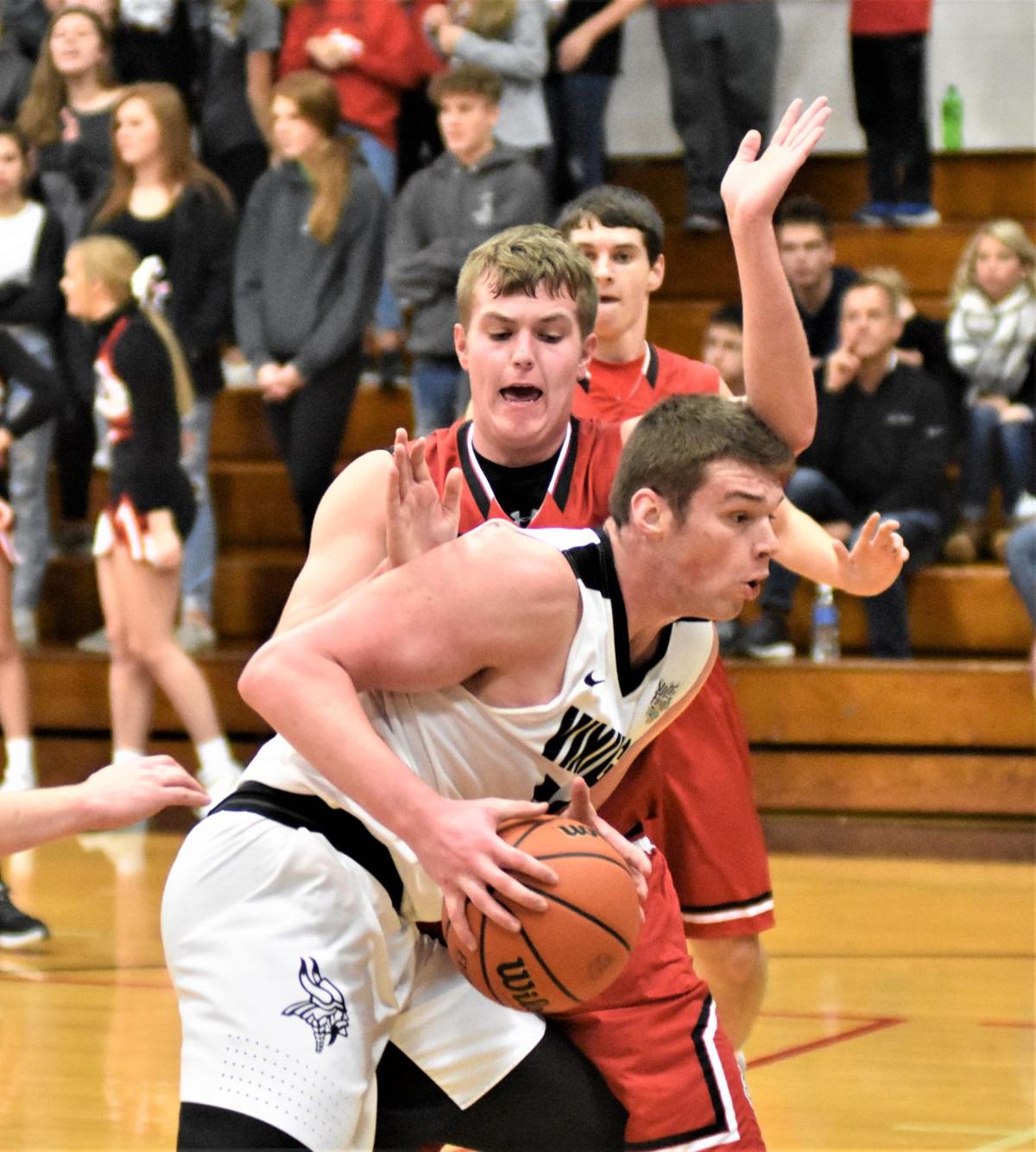 Viking Keegan O’Neill works for position against Orleans on Saturday.

Hagen Knepp goes up for a layup against Orleans on Saturday night.

Viking Keegan O’Neill works for position against Orleans on Saturday.

MONTGOMERY — The Barr-Reeve Vikings fired its first shot it to the 2020 sectional, with a 44-31 victory over potential sectional foe Orleans on Saturday at Kavanaugh Kourt.

B-R got strong second half scoring from sophomore Hagen Knepp, as well as senior Keegan O’Neil owning the boards, along with balanced scoring across the rest of the line up, to push B-R to its second win of the year.

“We had way too many turnovers, turning it over on four of our first eight possessions and that really hurt our start. It was a very physical game, and it seemed like we were trying to hit home runs instead of hitting singles, bunts and walks at first,” said B-R coach Josh Tnompson. “They are much improved.”

“Hagen really got us sparked with a lot of energy, diving for loose balls and that was nice. We have a lot of things to correct, especially defensively before Tuesday. We also know teams are going to come out and put a lot of pressure on us. We have a short turnaround before then and we know what’s ahead of us.”

Three Viking turnovers led to an early 4-0 Orleans lead before a Devin Graber free throw got the Vikings on the board four minutes into the game. Brycen Graber added the first B-R bucket off a steal, while an and-one from senior Keegan O’Neill pushed the Vikes out to a 6-4 lead, a lead they would not give up for the rest of the game. Jamison Miller also contributed with a pair from the charity stripe along with O’Neill’s second bucket to cap a 10-0 run, leading to a 10-6 margin at the end of the first quarter.

Hagen Knepp and Brycen Graber combined for the first four points of the second. Miller also added a trey from the corner to make it 19-8, with 4:30 left in the second. Jacob Wagler also got in the scoring column, as did Tyson Knepp pushing the margin to 25-10. B-R then took 1:15 off the clock before Brycen Graber was able to find Devin Graber for the final points of the half and a 27-13 lead.

Barr-Reeve was held scoreless for the first two minutes of the third, but a pair of buckets from Hagen Knepp doubled up the score to 31-15. The Bulldogs added a trey from Keighen Shawler, but Knepp returned with his third basket of the quarter.

Orleans cut the margin to 10 with a minute left in the third, but a Miller lay up finished off the quarter with a 35-23 Viking lead.

O’Neill opened the final quarter of scoring with a basket at 5:38 however it was the Viking defense that was most impressive, keeping the Bulldogs off the scoreboard for 4:00. Miller added a trey, along with Knepp’s eighth point of the half. Jacob Wagler added the final basket of the game, helping B-R to the 44-31 win.

B-R was led by Knepp with 12 points, while O’Neill and Miller, who had nine each. Also scoring was Brycen Graber, Devin Graber and Wagler with four each, followed by Tyson Knepp with two. Orleans was led by John Love and Shawler with six each.

The Vikings moved to 1-1 on the JV season with a 51-40 win. Nick Swartzentruber led with 12 points, Tommy Kidwell and Kayden Graber had 10 each to lead the Vikings.

On Tuesday, Barr-Reeve heads to the west side of Evansville to face Evansville Memorial in brand new Screaming Eagle Arena at USI.

Wanda (Grannan) Sanders, 82, of Washington Indiana, passed peacefully with her daughter by her side on Jan. 9, 2020, at Lakewood Ranch Hospital in Florida after a long illness. Wanda was born Aug. 10, 1937, the eldest daughter of the late Gervase and Florence (Garner) Grannan. She attended g…